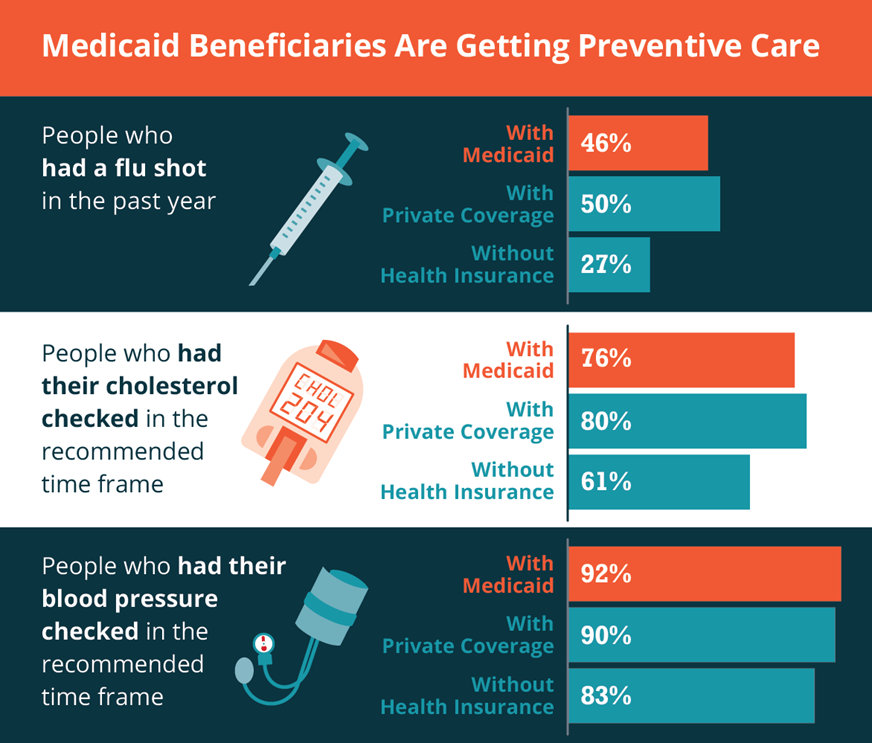 The report, Does Medicaid Make a Difference? Findings from the Commonwealth Fund Biennial Health Insurance Survey, 2014, compares the experiences of adults ages 19 to 64 who had Medicaid, had private insurance, or spent some time during the year without coverage. The researchers find that Medicaid beneficiaries have good experiences with their doctors—53 percent got a same- or next-day appointment the last time they were sick, compared to 43 percent of uninsured adults. When getting care from their doctor, 67 percent of those with Medicaid said their doctor always or often coordinated their care with other providers, compared to 55 percent of the uninsured.

“Medicaid provides millions of Americans with health insurance, and it is important to track how that insurance is working for them,” said study coauthor Sara Collins, Vice President for Health Care Coverage and Access at The Commonwealth Fund. “These results indicate that on many measures Medicaid works nearly as well as, and sometimes better, than private insurance and is helping people get and afford the care they need.”

According to the analysis, which uses findings from the Commonwealth Fund 2014 Biennial Health Insurance Survey, Medicaid provides good financial protection, often better than that provided by private coverage. Fewer than one in five (19%) Medicaid beneficiaries reported having trouble paying their medical bills, having to change their way of life to pay bills, being contacted by a collection agency about an unpaid bill, or paying off medical debt over time. In contrast, a third (33%) of people with private insurance and 47 percent of those uninsured during the year reported at least one of those problems.

Medicaid Beneficiaries Are Getting Preventive Care

To assess the effects of having insurance coverage, the Commonwealth Fund researchers controlled for differences in income, race, age, gender, and health status. They found that Medicaid enrollees are more likely than people without insurance to get preventive care and that enrollees receive preventive care at rates statistically equivalent to rates for the privately insured.

“These findings show that it is better to have Medicaid than to not have any health insurance at all,” said Commonwealth Fund President David Blumenthal, M.D. “In crucial areas like preventive care and being able to see a doctor when you’re sick, people with Medicaid are doing much better than those who are uninsured. And, in most areas, Medicaid enrollees are doing as well as or better than those with private insurance.”