New Report Finds Americans Have Fewer Doctor and Hospital Visits Than People in Other Nations; Outsized Spending Likely a Result of More Technology, Higher Prices For Care and Prescriptions Drugs

New York, N.Y., October 8, 2015 — The U.S. spent more per person on health care than 12 other high-income nations in 2013, while seeing the lowest life expectancy and some of the worst health outcomes among this group, according to a Commonwealth Fund report out today. The analysis shows that in the U.S., which spent an average of $9,086 per person annually, life expectancy was 78.8 years. Switzerland, the second-highest-spending country, spent $6,325 per person and had a life expectancy of 82.9 years. Mortality rates for cancer were among the lowest in the U.S., but rates of chronic conditions, obesity, and infant mortality were higher than those abroad.

“Time and again, we see evidence that the amount of money we spend on health care in this country is not gaining us comparable health benefits,” said Commonwealth Fund President David Blumenthal, M.D. “We have to look at the root causes of this disconnect and invest our health care dollars in ways that will allow us to live longer while enjoying better health and greater productivity.”

Using data from the Organization for Economic Cooperation and Development (OECD) and other sources, the report, U.S. Health Care from a Global Perspective: Spending, Use of Services, Prices, and Health in 13 Countries, compares health care spending, use of services, prices, and health outcomes in the U.S. with those in Australia, Canada, Denmark, France, Germany, Japan, the Netherlands, New Zealand, Norway, Sweden, Switzerland, and the United Kingdom. Most of the data are for 2013, and so predate the major insurance provisions of the Affordable Care Act.

Commonwealth Fund researchers found the U.S. to be a substantial outlier when it comes to health spending. Health care consumed 17.1 percent of the nation’s gross domestic product (GDP) in 2013, about 50 percent more than any other country. Despite being the only country in the study without universal health care coverage, government spending on health care in the U.S.—mainly for Medicare and Medicaid—was high as well, at $4,197 per person in 2013.

By comparison, the U.K., where all residents are covered by the National Health Service, spent $2,802 per person.

Americans Get Less Health Care, Spend More for It

According to the study, health care spending per person is highest in the U.S. not because Americans go to doctors and hospitals more often, but because of greater use of medical technology and health care prices that are higher than in other nations. When looking at health service pricing and use, the report finds:

“When you look more deeply at how countries spend on health care, it is very clear that in the U.S. we are paying higher prices but not getting more,” said David Squires, senior researcher at The Commonwealth Fund and coauthor of the report. “And because we spend so much on health care, there is less to spend on other important needs and investments.”

High health spending in the U.S. has far-reaching economic consequences, affecting wages and personal financial well-being while worsening budget deficits, the report’s authors say. New health care models like accountable care organizations, which base provider pay on patient outcomes, could encourage higher-quality, lower-cost care. These models, they say, could also help bring about a shift toward proportionally greater spending on social services, as health care organizations are incentivized to think more broadly about what their patients need to be healthy.

When the embargo lifts, the full report will be available. 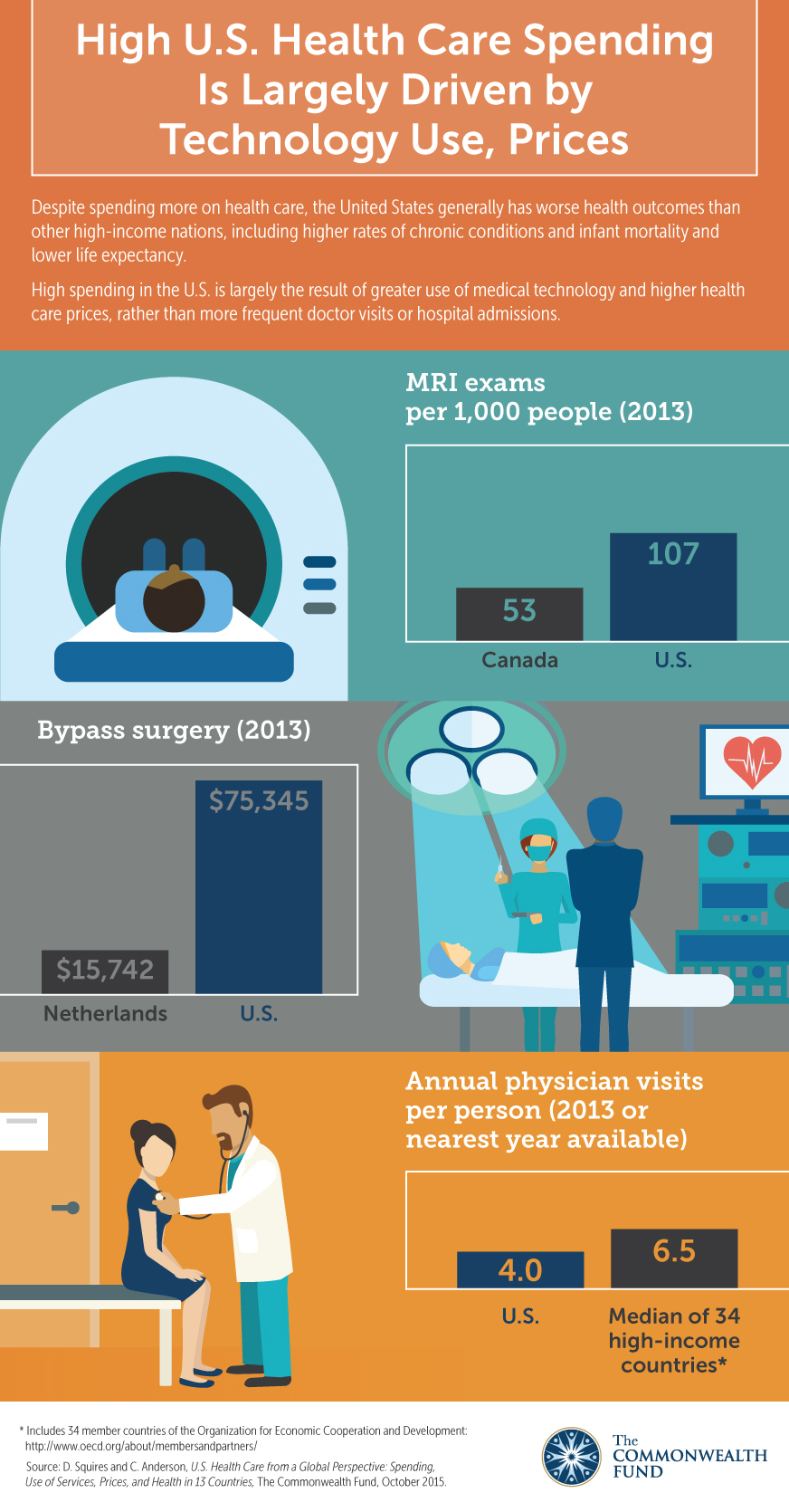