New 11-Country Survey Finds U.S. Seniors Are the Sickest, Most Likely to Struggle to Afford Needed Health Care and Struggle With Basic Needs Like Food and Housing

Survey Compares How U.S. Seniors Fare Under Medicare Compared to 10 Other Nations with Universal Coverage; Points to Need to Strengthen Medicare and Invest in Social Services

New York, NY, November 15th, 2017 — Despite having nearly universal health coverage through Medicare, adults 65 and older in the United States are sicker than those in other countries and are more likely to go without needed care because of costs, according to the Commonwealth Fund’s 20th International Health Policy Survey, out today in Health Affairs. 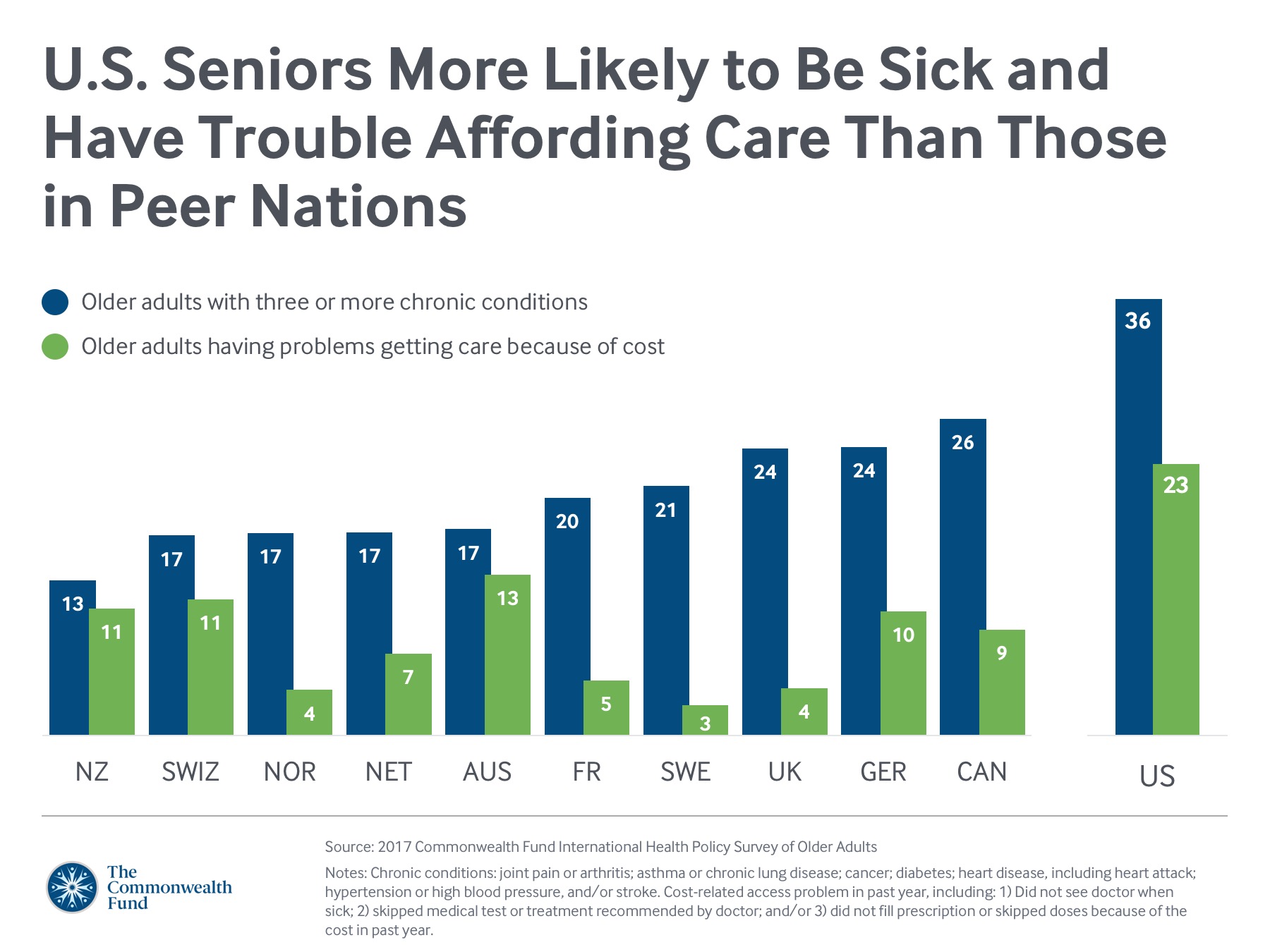 The survey compared the health care experiences of older adults, including those with the highest medical needs, in Australia, Canada, France, Germany, the Netherlands, New Zealand, Norway, Sweden, Switzerland, the United Kingdom, and the U.S. It found that in the last year, 23 percent of U.S. seniors, citing costs, didn’t go to the doctor when they were sick, didn’t fill a prescription or skipped a dose, or didn’t get a recommended test or medical treatment. In France, Norway, Sweden, and the U.K., no more than 5 percent of seniors skipped needed care because of costs.

“Because all U.S. adults 65 and over qualify for Medicare, they are the only group in our nation that has universal health insurance coverage,” said Robin Osborn, lead author of the study and Vice President and Director of the International Program in Health Policy and Practice Innovations at The Commonwealth Fund. “Yet U.S. seniors face more financial barriers to care than those in other countries, and are, in effect, hit with a triple whammy — higher health care costs, higher out-of-pocket costs, and because the U.S. doesn’t invest heavily in social services, they are more likely to struggle to have their basic needs met. If we want to better protect our seniors, we need to both address shortfalls in Medicare and invest more in social services.”

According to the survey, U.S. seniors face a unique combination of high health care costs, substantial economic challenges, and limited social supports. Prior research has shown the U.S. invests significantly less in social services than other wealthy nations. For example:

Caring for Sickest Seniors a Common Struggle for Wealthy Nations

When looking specifically at older adults who are “high need” either because they had multiple chronic illnesses and/or trouble with the basic activities of daily living, the study found that, across nations, many are dissatisfied with the quality of their care. In Australia, 41 percent were somewhat or not at all satisfied, compared to 26 percent in the U.S. and 21 percent in Switzerland, the country that did best.

U.S. seniors who were sickest were also the most likely to struggle to make ends meet. High-need U.S. seniors struggled significantly with costs:  31 percent skipped care because of costs, compared to only 2 percent in Sweden, and nearly one-third worried about having enough money for healthy meals, rent, or other bills. Still, high-need seniors in other nations struggled as well, with about a quarter of those in Australia and Germany also reporting that they worried about affording food, rent, or other bills.

Many high-need seniors also suffer from anxiety or depression, which can lead to poorer health outcomes and higher costs. Approximately one-quarter or more of high-need seniors in every country except Sweden (15%) reported emotional distress such as depression or anxiety.

The authors note that all the nations surveyed are challenged with providing the best possible health care to their seniors, many of whom are very sick and struggle with basic daily tasks like eating and dressing. They point to the importance of learning from other countries’ best ideas as well as from mistakes. The U.S. in particular, they say, has much to gain from examining countries where universal health care begins at birth and where investments in social services such as food and housing support result in lower health care spending.

“This survey asks seniors around the world, ‘What is it like to age and be sick in your health care system?” said Commonwealth Fund President David Blumenthal, M.D. “Clearly there are struggles everywhere, but here in the U.S. we are hearing loud and clear that many of our seniors, especially those who are sickest, need more support if they are going to get the health care they need and live healthy lives.”

How Can States Improve COVID-19 Vaccination Rates in Their Medicaid Programs?

The Courts Weigh In on the Texas Antiabortion Statute