New York, New York, April 27, 2017—Having Medicaid is not only substantially better than being uninsured, but it provides enrollees with health insurance that on most measures is as good as or, in some cases, better than private coverage, according to new a Commonwealth Fund report. Medicaid is currently the nation’s largest health insurer, covering more than 70 million people, about 12 million of whom enrolled when 31 states and the District of Columbia expanded eligibility for the program under the Affordable Care Act (ACA).

The report finds that the large majority of people who have Medicaid for the full year are able to get the health care they need. Based on survey results, 91 percent have a regular source of care, compared to 93 percent of privately insured people with continuous coverage and 77 percent of people uninsured for at least part of the year. Medicaid enrollees are also happy with their care—57 percent rated it as very good or excellent, compared with 52 percent of the privately insured and 40 percent of the uninsured.

“There is a common misperception that Medicaid is not good health insurance, and these results tell us that simply isn’t the case,” said Sara Collins, vice president for Health Care Coverage and Access at The Commonwealth Fund, and a coauthor of the report.

The report, How Medicaid Enrollees Fare Compared with Privately Insured and Uninsured Adults, uses responses from The Commonwealth Fund’s 2016 Biennial Health Insurance Survey to compare the health coverage and health care experiences of people with Medicaid, uninsured individuals, and those with private insurance, including employer plans and individual market plans.

The Commonwealth Fund report finds that Medicaid enrollees were much more likely than the uninsured to get preventive care such as blood pressure checks, cholesterol screenings, and flu shots. They were also more likely to have received cancer screenings such as mammograms and colonoscopies. 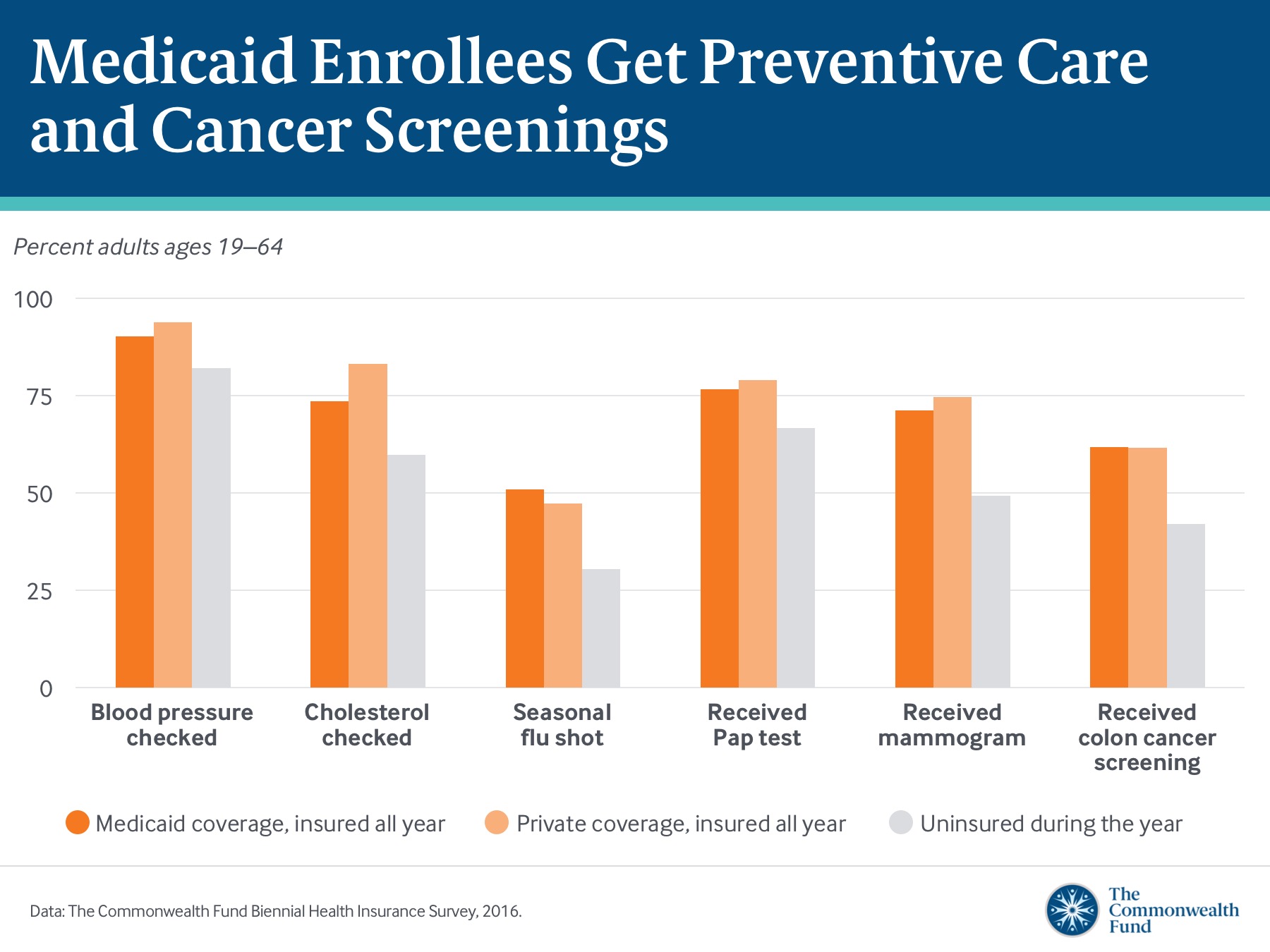 According to the survey, people with Medicaid were substantially less likely than the uninsured or those with private health insurance to report they had medical bills problems or skipped needed health care because of costs:

“Medicaid is now our nation’s biggest health insurer, covering more than 70 million people,” said Commonwealth Fund President David Blumenthal, M.D. “These findings are encouraging because they tell us this coverage is working well for a large majority of its beneficiaries. As state and federal policymakers consider whether to expand or alter Medicaid, it will be important to keep the program’s successes, and the security it provides for those people, in mind.”

The Commonwealth Fund Biennial Health Insurance Survey, 2016, was conducted by Princeton Survey Research Associates International from July 12 to November 20, 2016. The survey consisted of 25-minute telephone interviews in either English or Spanish and was conducted among a random, nationally representative sample of 6,005 adults age 19 and older living in the continental United States. A combination of landline and cellular phone random-digit dial (RDD) samples was used to reach people.

This report limits the analysis to respondents ages 19 to 64 (n=4,186). Statistical results are weighted to correct for the stratified sample design, the overlapping landline and cellular phone sample frames, and disproportionate nonresponse that might bias results. The resulting weighted sample is representative of the approximately 187.4 million U.S. adults ages 19 to 64.