New Report: Uninsured Rate for U.S. Women Drops by Nearly Half Since Passage of ACA; More Women Buying Plans on Their Own

The report, How the Affordable Care Act Has Helped Women Gain Insurance and Improved their Ability to Get Health Care, uses findings from the Commonwealth Fund’s Biennial Health Insurance Survey to compare women’s health coverage and health care in the years before and after the ACA’s major coverage expansions. The study finds that the law’s insurance market reforms, such as requiring plans to include maternity coverage, not charging women more because of their gender, and expanding Medicaid eligibility vastly improved health care access and coverage for U.S. women. In 2010, just 5 percent of working-age women had coverage through the individual market and 10 percent were insured through Medicaid. By 2016, the share of women with individual coverage had doubled (10%) and the share with Medicaid climbed to 15 percent. 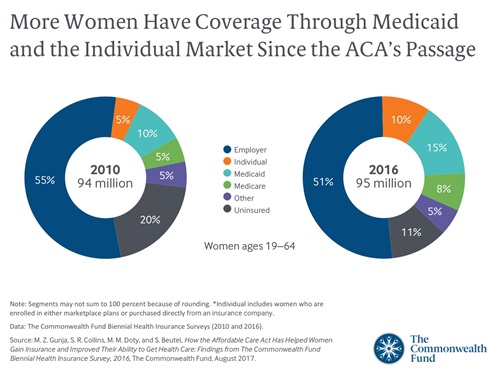 “Before the Affordable Care Act, it was extremely difficult for women not covered through an employer to buy health insurance,” said Sara Collins, Vice President for Health Care Coverage and Access at the Commonwealth Fund and the report’s coauthor. “This report finds that the ACA’s health insurance market reforms and coverage expansions have enabled millions of women to gain comprehensive insurance with free access to preventive care services critical to their health.”

According to the report, in 2016 more than two-thirds (67%) of women who had shopped for health insurance on their own in the prior three years ended up enrolling in a plan. This is a substantial increase from 2010, when fewer than half (46%) of women who looked for plans on their own enrolled in one. Moreover, the share of women reporting that they had difficulty finding an affordable individual plan fell by nearly half — from 60 percent in 2010 to 36 percent in 2016.

A previous study found that one-third of women who tried to buy an individual health plan from 2007 to 2010 had either been turned down by an insurance company, charged a higher premium because of their health, or had a specific health problem that was excluded from their plan. Among women with chronic illnesses, nearly half (46%) reported these problems.

Additional key findings from the new report include:

“This report describes substantial progress for women since the Affordable Care Act was passed,” said Commonwealth Fund President David Blumenthal, M.D. “Millions of formerly uninsured women have health insurance and are using it to get health care they likely would have gone without before the ACA. It’s essential for us to continue to move forward and build on this progress so everyone has access to high-quality, affordable health care.”

Policymakers should work to ensure that the 17 million to 18 million people who have coverage through the individual market can successfully enroll this fall, the Commonwealth Fund researchers say. Although the ACA’s individual market reforms have made finding affordable coverage significantly easier, one-third of women still find it difficult. One option to improve premium affordability, the authors note, is to extend eligibility for tax credits to people earning more than 400 percent of poverty (about $50,000 for an individual, and $98,000 for a family of four). In addition, millions of poor women would gain coverage if the 19 states that have not yet expanded eligibility for Medicaid were to move forward.