Many working families are spending more of their incomes on health care, a new Commonwealth Fund report finds. According to Trends in Employer Health Care Coverage, 2008–2018: Higher Costs for Workers and Their Families, that’s because health insurance costs and deductibles have been growing faster than median income in all states over the last decade.

The report is part of the Fund’s ongoing series looking at trends over the decade in the overall cost of employer health insurance. It provides a state-by-state analysis of how much insurance is costing workers in premiums, deductibles, and as a share of their income from 2008 to 2018. 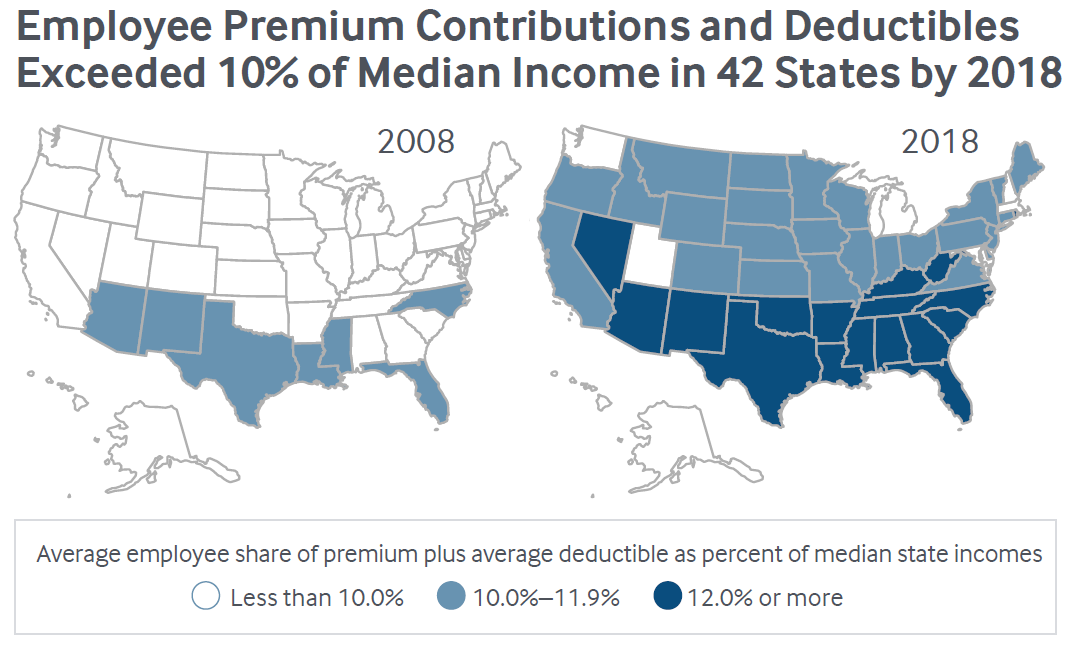 Among the key findings from the report:

The Commonwealth Fund report uses data from the federal Medical Expenditure Panel Survey–Insurance Component (MEPS–IC) to look at two trends in employer coverage over the last decade: how much workers are paying, on average, in premiums and deductibles, and the size of these costs relative to median income in each state. The MEPS– IC is the most comprehensive national survey of U.S. employer health plans, surveying more than 40,000 private sector employers in 2018. It had an overall response rate of 67.8 percent.

Total premium and other insurances costs are compared with median household incomes for the under-65 population in each state. Income data come from the U.S. Census Bureau’s Current Population Survey (CPS) of households; analysis of CPS data performed by Ougni Chakraborty and Sherry Glied of New York University for the Commonwealth Fund.

Over the last decade, health care costs have eaten up a larger share of income for millions of people with employer coverage. As the authors note, this study considered only families with middle incomes. Lower income people with employer coverage devote an even larger share of their income to health insurance and health care costs.

Families at risk for spending the largest share of their incomes on insurance costs and deductibles tend to be concentrated in the South, where median incomes are lower, on average.

Several Democratic members of Congress and presidential candidates have proposed enhancing the affordability and cost protection of plans offered through the Affordable Care Act’s marketplaces and allowing people with employer plans the option to buy coverage there. Others would replace most private insurance with a public plan like Medicare. Republican health reform ideas, on the other hand, tend to favor replacing the ACA with more market-oriented approaches that give states greater discretion over insurance markets and programs.

“Over the last decade, employer health insurance premiums and deductibles have grown faster than workers’ wages. This is concerning, because it may put both coverage and health care out of reach for millions of people. Several simple policy steps, such as fixing the Affordable Care Act’s family coverage glitch, have the potential to make health care more affordable for U.S. families.”

“The majority of people under age 65 in the U.S., 164 million, get their health insurance through an employer, and that insurance is less and less affordable for many of them. Ensuring that everyone can afford health insurance and health care will require policy fixes and systemwide efforts to get to the heart of the health care cost problem — the exorbitant prices we often pay for health care in the United States."