New Report: Affordable Care Act Has Narrowed Racial and Ethnic Gaps in Access to Health Care, But Progress Has Stalled

The Affordable Care Act (ACA) has led to historic improvements in access to health care for black and Hispanic adults in the United States while also reducing disparities with white adults. But progress has stalled since 2016 and eroded in some cases, according to a new Commonwealth Fund report.

The report, How the Affordable Care Act Has Narrowed Racial and Ethnic Disparities in Access to Health Care, looks at three key measures of health care access through the lens of race and ethnicity: not having insurance coverage, going without needed health care because of cost, and having a regular source of care. The researchers focused on the years 2013 to 2018.

In the years following the law’s major coverage expansions in 2014, the racial gap in access to health care narrowed across the country, especially in states that expanded Medicaid, according to the study. In these expansion states, the gap narrowed so much that rates of coverage and reports of access barriers among blacks were similar to, or even better than, those of white adults in nonexpansion states. Among the researchers’ other key findings:

Among the researchers’ other key findings: 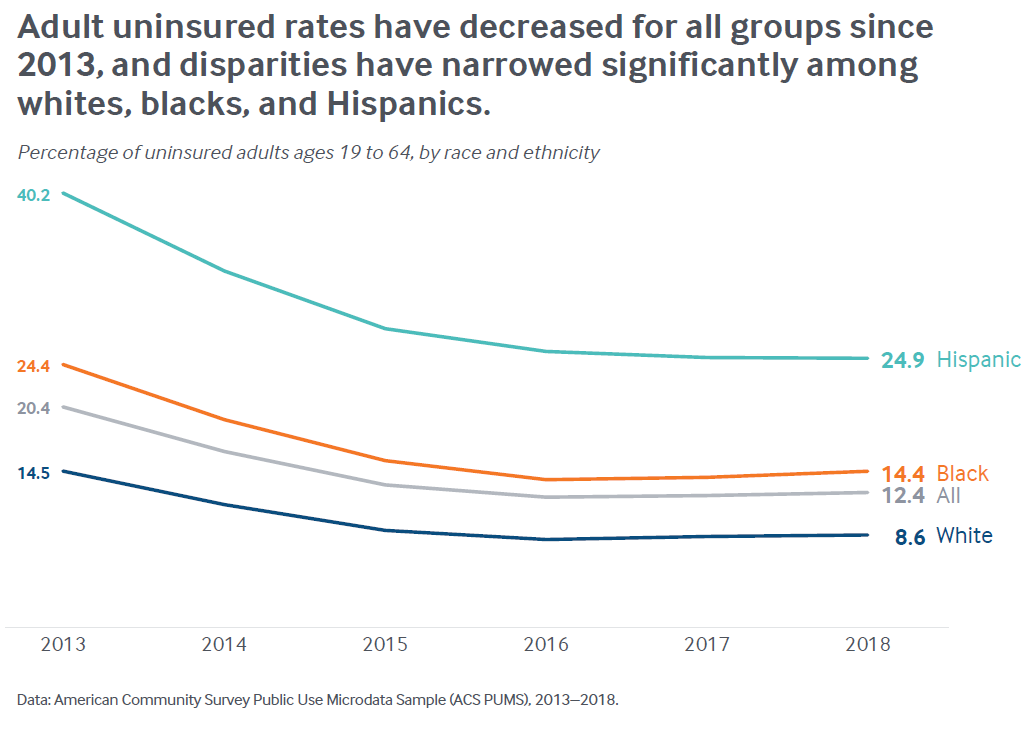 “The Affordable Care Act’s coverage expansions have helped drive historic progress in reducing racial and ethnic gaps in health care, but we still have a long way to go. Too many black and Hispanic adults are still unable to get health insurance or the health care they need, which contributes to inequitable health outcomes. Whether we can build on progress made since the ACA will depend on policies like expanding eligibility for Medicaid and enhancing subsidies, as well as addressing discrimination and related causes of our health system's long-standing racial inequities.”

“It’s encouraging to see that the gaps in access to health care for black and Hispanic adults are narrowing over time, but we cannot let the progress we’ve made slip through our fingers. Improving upon the Affordable Care Act, and expanding Medicaid in all states, will be critical to ensuring that everyone can get the affordable, high-quality health care they deserve.”

The study authors note that state and federal policymakers could pursue a number of actions in the near term to further
reduce access differences for U.S. racial and ethnic minorities. These include:

The analysis stratifies survey respondents by their self-reported race or ethnicity: white (non-Hispanic), black (non-Hispanic), or Hispanic (any race). National annual averages were calculated from 2013 to 2018 for each of the three indicators listed above, stratified by race/ethnicity. The average annual rate also was calculated for white, black, and Hispanic individuals from 2013 to 2018 across two categories of states: the Medicaid expansion group, including the 31 states that, along with the District of Columbia, had expanded their Medicaid programs under the ACA as of January 1, 2018; and the nonexpansion group, comprising the 19 states that had not expanded Medicaid as of that time. (Maine and Virginia were considered nonexpansion states in this analysis because they both implemented their Medicaid expansions in 2019.) Reported values for expansion/nonexpansion categories are averages across survey respondents, not averages of state rates. Additionally, average annual state-specific uninsured rates from 2013 to 2018 were calculated for certain subpopulations in Louisiana and Georgia.

Beyond Vaccines: How Can We Prevent the Next Pandemic?

What Do Americans Think About Getting Vaccinated Against COVID-19?

Racial and Ethnic Inequities in Health Care Coverage and Access, 2013–2019