A new survey from the Commonwealth Fund reveals the disparate impacts of COVID-19 on Black and Latino people, women, and people with low incomes during the early months of the pandemic. The pandemic has shined a light on existing inequities in the United States and how quickly a crisis exacerbates them.

Latino and Black adults have experienced economic hardship during COVID-19 at a rate between two and three times greater than white adults. More than half of Latino and nearly half of Black survey respondents said they have struggled economically, and were unable to pay for basic necessities, or used up all their savings or borrowed money — a substantially greater proportion than the 21 percent of white respondents who reported the same. 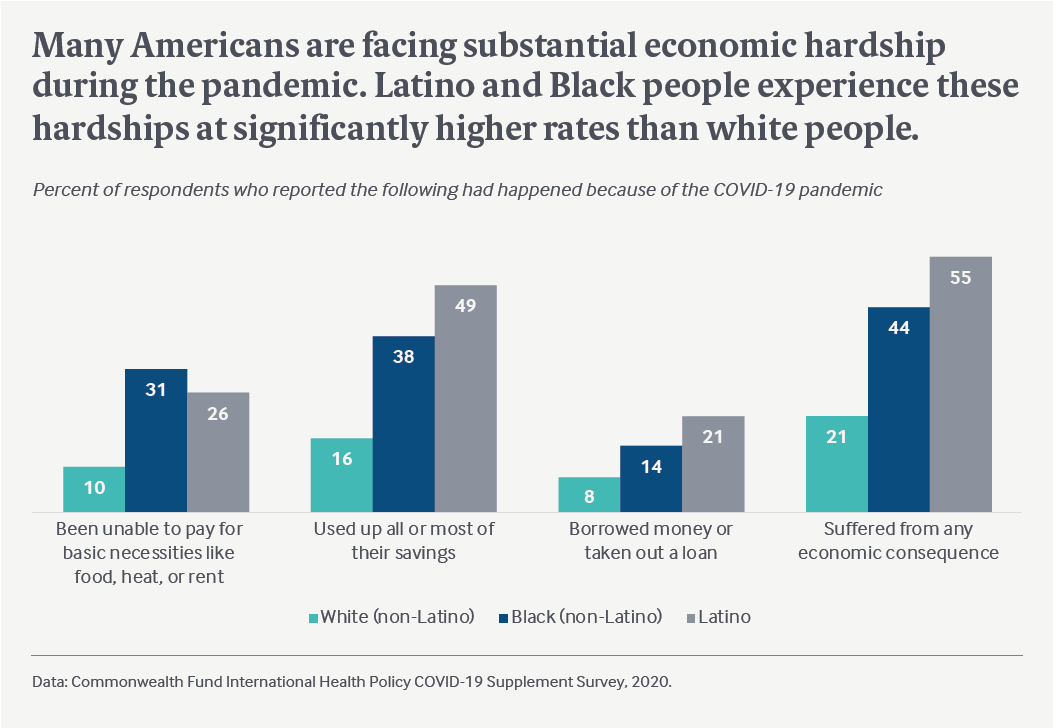 Latino and Black people, women, and people with low income are most at risk of mental health concerns because of the pandemic. Many Americans are experiencing mental health problems from COVID-19. But some groups report having stress, anxiety, or great sadness due to the pandemic at higher rates. Among them:

Additionally, 35 percent of Blacks approved of state and local government leaders’ pandemic response, compared to 53 and 54 percent of Latinos and whites, respectively. The disproportionately negative impact of COVID-19 on Black communities, coupled with experiences and awareness of inequity, may have contributed to the low satisfaction with the government’s response.

“The economic and emotional toll of COVID-19 has been widespread and Black and Latino Americans continue to face significantly greater hardships during the pandemic. It’s true that deep systemic inequities have existed in our country for generations, but the cracks in our health care system have now become fissures and must be addressed. To start, the U.S. can improve access to mental health services, invest in primary care, and address socioeconomic needs exacerbated by the pandemic, particularly for people of color.”

“This survey highlights deep disparities in our country and failures in our health care system that we can no longer accept. Persistent wealth gaps, inadequate access to health care, poor living conditions, and unsafe work environments are just a few of the root causes for why this pandemic has affected people of color disproportionately. Of course, getting the pandemic under control is critical, but we also have to dismantle the racist policies and practices that have led us here.”

The 2020 Commonwealth International Health Policy COVID-19 Supplement Survey was conducted by SSRS, a survey research firm, and country contractors, from March 30 to May 25, 2020. The COVID Supplement Survey was part of a larger survey that was in the field from February to June 2020, and was administered to a nationally representative sample of adults ages 18 and older in Australia, Canada, France, Germany, the Netherlands, New Zealand, Norway, Sweden, the United Kingdom, and the United States. This study limits the analysis to the U.S. population. The U.S. sample size was 1,266. Black and Latino people were oversampled to stratify the analysis by race and ethnicity. Interviews were completed either online or using computer-assisted telephone interviews. The response rate in the U.S. was 14 percent. Data were weighted to ensure that the final outcome was representative of the adult population.