How the U.S. Health Care System Contributes to Climate Change

An EMS crew wheels in a patient to Massachusetts General Hospital from their ambulance in Boston on Apr. 8, 2020. Transportation of goods and services procured by the health sector account for a large amount of carbon emissions in health care. Photo: Jim Davis/Boston Globe via Getty Images

What does health care have to do with climate change?

Climate change, possibly the gravest threat facing humanity, is already taking a toll on people’s physical and mental health. While health care systems shoulder the burden of caring for individuals affected by climate change, they also contribute to the problem.

Worldwide, the health care sector is responsible for as much as 4.6 percent of total greenhouse gas (GHG) emissions, which include carbon dioxide, methane, and ozone, among others. In the United States, where the share is 8.5 percent, the health care system is becoming more, not less, polluting: emissions increased 6 percent from 2010 to 2018. These emissions exacerbate climate change and its negative health impacts.

Some people believe that health care organizations have an obligation to reduce GHG emissions, given the industry’s size, its substantial carbon footprint, and its mission to improve health. Fortunately, there are a number of opportunities for the U.S. health system to do its part in alleviating climate change.

Greenhouse gas (GHG) emissions: Greenhouse gases trap heat and make the planet warmer. Human activities are responsible for nearly all the increase in greenhouse gases — primarily carbon dioxide — in the atmosphere over the past 150 years. In the United States, the largest source of GHG emissions from human activities is from the burning of fossil fuels for electricity, heat, and transportation.

Resilience or adaptation: Regardless of how successful humans are at limiting the root causes of climate change, the significant impacts of more frequent and severe weather, ocean warming and acidification, extended periods of drought and extreme temperatures are affecting and will continue to affect our communities. The ability to prepare for, recover from, and adapt to these impacts is called climate resilience or adaptation.

What makes up the carbon footprint of the U.S. health system?

The sectors contributing the most to carbon emissions in the health system are hospital care (36%), physician and clinical services (12%), and prescription drugs (10%). The Greenhouse Gas Protocol offers another way to look at GHG emissions, categorizing them as:

While health systems exert direct control over Scopes 1 and 2 emissions, they can only influence, not control, Scope 3 emissions, by far the largest source of GHGs produced by the health sector. Understanding the different sources of emissions and where health systems could have the most influence is key to deciding how to begin reducing health care’s carbon footprint. 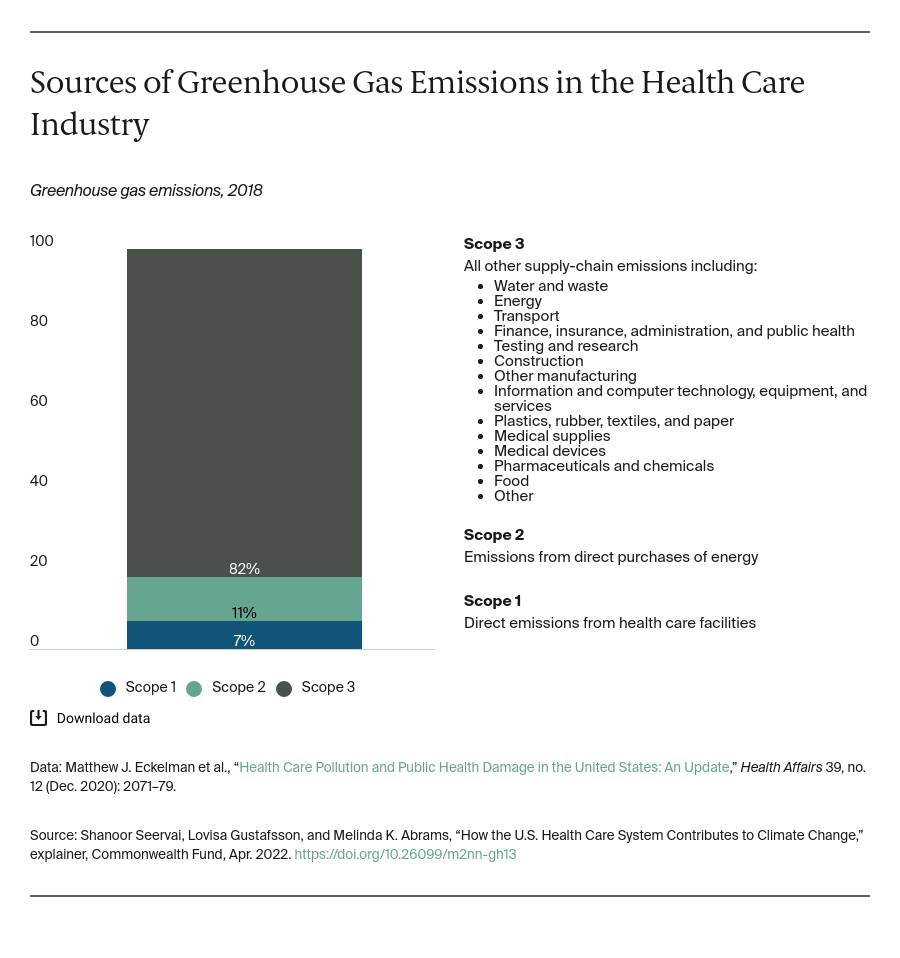 What does it mean for a health system to achieve carbon neutrality?

Among the various GHGs that play a role in climate change, carbon dioxide plays the biggest, and the amount of carbon emissions are expected to only increase in the near future. Focusing on them is therefore a natural starting point.

While it’s impossible for a health system to generate zero carbon emissions, health systems could seek to achieve carbon neutrality. They can start by reducing carbon emissions as much as possible, by, for example, using renewable energy, greener models of care delivery, and low- and zero-emission transportation.

Why is it important that U.S. health care reduce its carbon footprint?

In a nutshell, it’s important because:

Where are we now, and what do we need to do?

A necessary first step is increasing awareness of the health system’s impact on climate change. At the federal level, the newly established Office of Climate Change and Health Equity is charged with protecting Americans’ health in the face of climate change. While the office has a lot of potential, it has yet to receive the funding it needs.

To some extent, health systems must learn to adapt to a changing climate and shore up their resilience. But they also can make an effort to mitigate the levels of GHG emissions they release. A handful of U.S. health systems are making progress, but most others will need to step up and make a stronger commitment. The government could take these further actions:

Climate change is already devastating the planet. The time to act is now, and health systems must do their part.

Getting to Net Zero: One Health System Fights Climate Change