What is the 340B program and why is it controversial?

The federal 340B Drug Pricing Program allows qualifying hospitals and clinics that treat low-income and uninsured patients to buy outpatient prescription drugs at a discount of 25 percent to 50 percent. The program is intended to help safety-net health care providers stretch their financial resources to reach more financially vulnerable patients and deliver comprehensive services.

Since its creation in 1992, the 340B program (named after a section of the Public Health Service Act) has grown significantly, both in the number of health care providers eligible to participate and in the volume of drugs they purchased through the program. But not everyone is happy about its growth, and there have been a series of legal challenges between drugmakers, providers, and federal policymakers. A recently decided Supreme Court case addressed a dispute between hospitals and the U.S. Department of Health and Human Services (HHS) regarding reimbursement for drugs dispensed under 340B. While this case may be resolved, many other disagreements remain.

Why are drug companies concerned about 340B?

Drug manufacturers are alarmed about the program’s fast expansion, from 8,100 provider sites (including both hospitals and pharmacies) in 2000 to 50,000 by 2020. New data released in August 2022 by the Health Resources and Services Administration suggest discounted purchases under the 340B program reached $44 billion in 2021, about 16 percent more than in 2020. 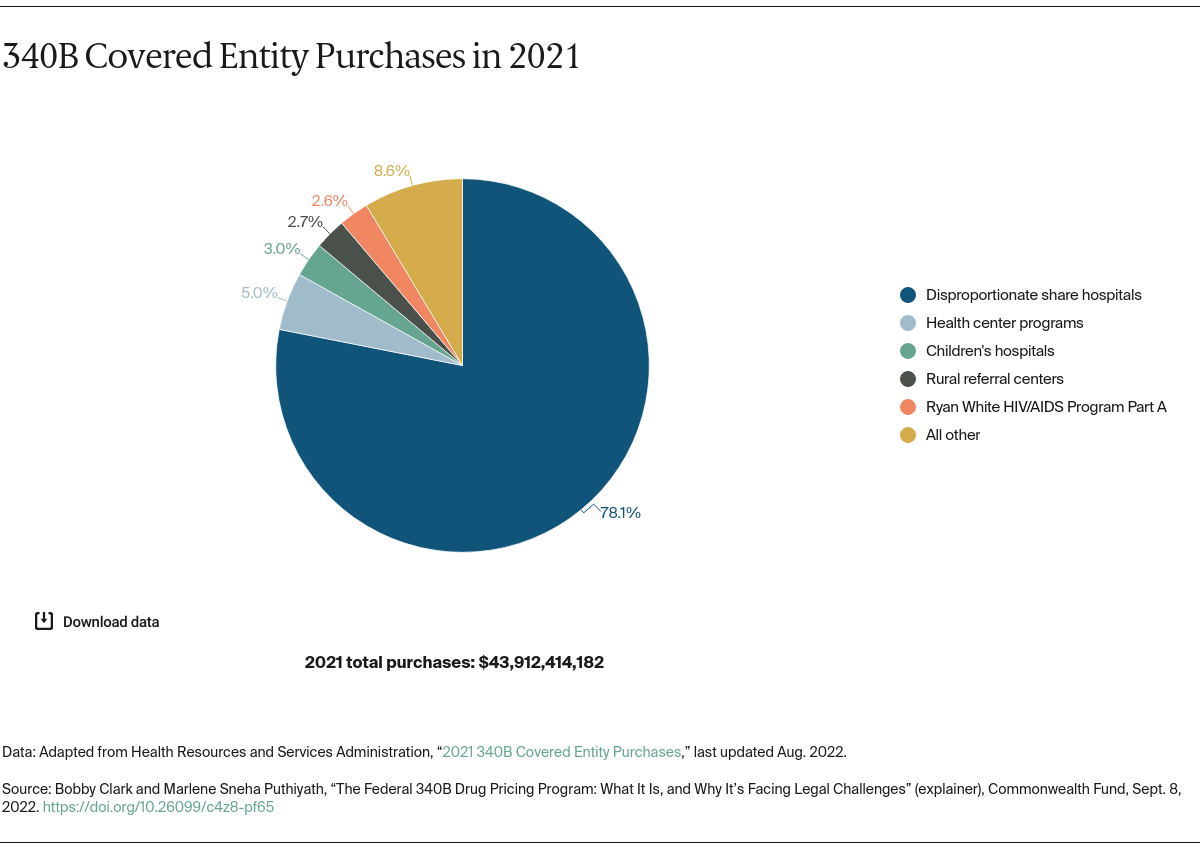 Part of this growth is attributed to the passage of the Affordable Care Act (ACA) in 2010, which expanded the type and number of organizations eligible for the 340B program. Also driving growth is a change in policy to allow a hospital or clinic to use an unlimited number of contract pharmacies, instead of just one. Contract pharmacies are owned or operated by third parties, not the 340B-covered entities themselves. Pharmaceutical companies argue that the law establishing the 340B program does not expressly permit these contracting arrangements, which they say are responsible for increasing drugmakers’ costs or loss of revenue.

Drugmakers further assert that the program’s operations lack transparency and oversight. They question whether savings that flow to providers from the purchase of discounted drugs are actually being used for lowering costs and improving care for low-income patients — or whether these savings are simply increasing providers’ profits.

In response to these concerns, some drugmakers have notified providers enrolled in the 340B program that only two designated contract pharmacy locations per hospital will be recognized. Others are also requiring 340B enrollees to submit patient drug claims data to receive the discounted price. Drugmakers argue these steps are needed to ensure that duplicative discounts are not being applied and to ensure that providers are adhering to the program’s intent.

How do health care providers counter these claims?

Hospitals, clinics, and other providers dispute that the 340B program’s growth is inappropriate. A significant amount of the care provided to America’s millions of uninsured people goes uncompensated, they point out, and policymakers intentionally expanded the program to address this.

Moreover, providers say the cost of the discounts that drug manufacturers provide remains a small percentage of their total U.S. sales. In 2020, estimated discounted drug purchases through the 340B program amounted to roughly 7 percent of the total U.S. drug market. Providers argue that pharmaceutical companies are attempting to limit use of the discount drug program only to maximize their profits, which are significantly greater than those of other large public companies.

Providers also highlight the fact that contract pharmacies have dispensed drugs to patients since the 340B program’s inception, but pharmaceutical companies only recently have raised concerns. Any effort to limit use of contract pharmacies, providers say, is a violation of the 340B authorizing statute as well as HHS guidance.

How have policymakers responded?

For the moment, it appears that most policymakers side with 340B entities and believe that the drug discount program is an important tool for safety-net providers. The Biden administration has reviewed the measures drug manufacturers are imposing on providers and determined that their actions are in violation of the law, resulting in 340B entities paying more than the discounted price they are eligible to receive. The Trump administration had taken similar positions in the past.

Members of Congress also have urged the 340B program’s administrators to take more aggressive steps to ensure pharmaceutical companies are abiding by the program’s requirements. A group of six lawmakers led by Rep. Abigail Spanberger (D–Va.) wrote a letter to HHS urging the Biden administration to take swift action against drug manufacturers that refuse to follow the law. HHS subsequently referred the matter to the department’s Office of the Inspector General for further investigation and possible imposition of civil monetary penalties. In May 2022, Sen. Chuck Grassley (R–Iowa) requested an update on this investigation and asked whether the department will take enforcement action against drug manufacturers’ noncompliance with the 340B program.

Others within government have raised concerns about the operational integrity of the program. In 2015, the U.S. Government Accountability Office released a report critical of Health Resources and Services Administration’s oversight of the program, suggesting that 340B-eligible entities and drugmakers were left largely to police themselves.

What’s happening on the legal front?

Many of these disputes have spilled over into the judicial arena, with a growing number of lawsuits over the past year involving drugmakers, health care providers, and state and federal officials. With cases still ongoing, the legal and regulatory landscape is still very much in flux. It remains to be seen how these disputes will be resolved and what kind of impact they will ultimately have on the size and scope of the 340B drug discount program.