Investing in child health is a high priority for state officials. More than one-third of children nationally receive health care funded by the federal government as well as the 50 states and the District of Columbia. Twenty-eight million children are covered by Medicaid, and 6 million are covered by the State Children's Health Insurance Program (SCHIP), which was enacted in 1997 to expand coverage of children in low-income families. Yet, some states do better than others in promoting the health and development of their youngest residents, and in ensuring that all children are on course to lead healthy and productive lives.

The recent State Scorecard on Health System Performance, prepared for The Commonwealth Fund Commission on a High Performance Health System, found that access to health care, as well as health care quality, costs, outcomes, and equity, vary widely across the states. This report examines performance variations among states' child health systems, building on many of the State Scorecard indicators as well as other key indicators of children's health. It finds similar variation in performance among states and abundant opportunities for all states to improve. With a goal of focusing on opportunities to improve, this analysis assesses performance relative to what is achievable, based on benchmarks drawn from the range of state health system performance.

The analysis focuses on 13 indicators of child health system performance along the dimensions of access, quality, costs, and the "potential to lead healthy lives." In addition, for two indicators, gaps in performance by income, race/ethnicity, and insurance are used to gauge equity. Six of the 13 indicators were included in the previously published State Scorecard; others were added from government data sources. All 50 states, plus the District of Columbia, are ranked on each indicator and the five dimensions of performance access, quality, costs, equity, and potential to lead healthy lives using the same methodology employed in the State Scorecard. The rankings for each dimension are then summed to derive an overall ranking for child health system performance. Figure ES-1 shows the indicators included, the range in variation across states, and the highest-achieving state on each indicator. (See "Appendix: Study Methodology" for further details.) 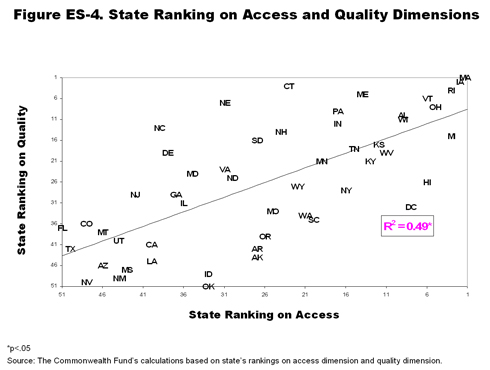 Benchmarks set by leading states show there are opportunities to improve health system performance to benefit children. If all states achieved top levels on each dimension of performance, 4.7 million more children would be insured and nearly 12 million more children would receive at least one medical and dental preventive care visit per year (Figure ES-5). More than 750,000 more children ages 19 to 35 months would be up-to-date on all recommended doses of five key vaccines, and more than 412,000 fewer children with special health care needs who needed specialist care would have problems getting referrals to specialty care services. Likewise, nearly 11 million additional children would have a medical home to help coordinate care, and 1.6 million fewer children ages 1 to 5 would be at moderate-to-high risk for developmental delays later in life. This report reveals critical areas in which state and federal policies are needed to improve child health system performance for all U.S. families. States that invest in childrens health reap the benefits of having children who are able to learn in school and become healthy, productive adults. Other states can learn from models of high performance to shape policies that ensure all children are given the opportunity to lead long, healthy lives and realize their potential. Further, investment in children's health care measurement and data collection at the state level could enrich understanding of variations in child health system performance. For many dimensions, only a limited set of indicators is available. In the case of costs, measures used in this report are for the total population and not specific to children. The indicators of child health care quality presented here are largely parent-reported; however, data on clinical quality are necessary to paint a clear picture of state child health quality. Thus, the collection of clinical data for children's health care quality is integral to future state and federal child health policy reform and could modify the state rankings provided in this report. Work currently under way should lay a firmer foundation for public and private action. 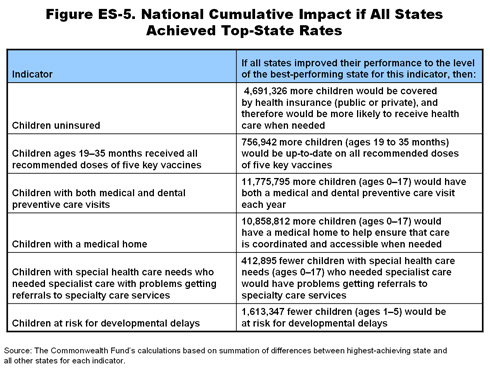