America's Underinsured: A State-by-State Look at Health Insurance Affordability Prior to the New Coverage Expansions

The United States is in the midst of the most significant health insurance expansion and market reforms since Medicare and Medicaid were enacted in 1965. The Affordable Care Act aims to insure millions of people without health care coverage and make medical care and premiums more affordable with coverage. Enrollment began in October 2013; major coverage reforms started in January 2014.

The twin goals of health insurance are to enable affordable access to health care and to alleviate financial burdens when injured or sick. It is well known that the uninsured are at high risk of forgoing needed care and of struggling to pay medical bills when they cannot postpone care. Studies further find that insured people who are poorly protected based on their households’ out-of-pocket costs for medical care are also at risk of not being able to afford to be sick.

Using newly available data from census surveys, this report provides national and state-level estimates of the number of people and share of the population that were insured but living in households that spent a high share of annual income on medical care in 2011–12. In the analysis, we refer to these people as “underinsured.” However, this group is only one subset of the underinsured. Our estimates do not include insured people who needed care but went without it because of the out-of-pocket costs they would incur, or the insured who stayed healthy during the year but whose health insurance would have exposed them to high medical costs had they needed and sought care.

The analysis finds that in 2012, there were 31.7 million insured people under age 65 who were underinsured. Together with the 47.3 million who were uninsured, this means at least 79 million people were at risk for not being able to afford needed care before the major reforms of the Affordable Care Act took hold.

At the state level, the percentage of the under-65 population who were either uninsured or underinsured ranged from 14 percent in Massachusetts to 36 percent to 38 percent in the five highest-rate states—Idaho, Florida, Nevada, New Mexico and Texas.

A decade or more of people losing health coverage and a steady erosion in the financial protection of insurance has also put middle-income families at risk. In 2012, one of five people (20%) under age 65 with middle incomes (between 200% and 399% of poverty)—an estimated 15.6 million people—were either underinsured or had no health insurance. The share of middle-income people who were underinsured or uninsured reached highs of 28 percent to 31 percent in Texas, Alaska, and Wyoming. 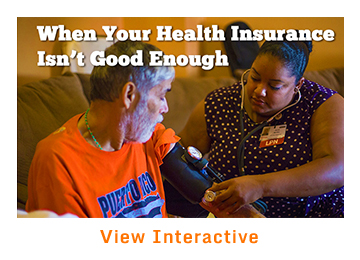 For those eligible to participate, income-related tax credits for premiums and Medicaid will limit the share of income individuals and families are required to contribute toward their premiums. Using newly available census data on out-of-pocket premium costs compared with incomes, we estimate that 29 million insured people were in households that spent more on premiums as a share of income in 2012 than the new premium contribution limits set by the Affordable Care Act for those eligible for subsidized coverage. Across states, the share of the population paying high premiums relative to their incomes ranged from 8 percent to 17 percent of the insured. Although only a portion of those with high-premiums compared to income (an estimated 11 million) will be eligible to participate in expanded Medicaid or to receive premium assistance for plans purchased in the marketplaces, the state level estimates provide a baseline to assess changes in premiums affordability relative to income over time.

The impact of insurance expansions on coverage, premium, and out-of-pocket costs for medical care will depend critically on state decisions regarding Medicaid. Income eligibility levels for premium tax credits start at 100 percent of poverty, with the law designed to expand Medicaid to cover people with incomes up to 138 percent of poverty. As of yet, 24 states have opted not to expand their Medicaid programs to 138 percent of poverty. Of these states, only Wisconsin will cover adults up to the federal poverty level. An estimated 15.2 million people who are either uninsured or underinsured who have incomes below poverty live in the 23 states where Medicaid eligibility for adults is well below poverty. Although some may be ineligible based on immigration status and others may be eligible under current Medicaid but not yet signed up, unless these states participate in the Medicaid expansion, there will be no new subsidized coverage option for these people since their income is too low to qualify for premium assistance.

State-level data indicate the law’s income-related reforms are well-targeted to help people with incomes in ranges that put them at greatest risk for being either uninsured or underinsured. The Affordable Care Act thus has the potential to reduce high medical care cost burdens while also covering the uninsured. However, the extent of improvement will critically depend on state decisions and the plans people select.

To the extent the law’s coverage provisions reach low- and middle-income families who are uninsured or underinsured, we may change the access and affordability map of the country. However, this will depend on states seizing the opportunity to invest and use new federal resources well, combined with effective oversight of private insurance plans.

The number of uninsured declined by nearly 2 million from 2010 to 2012 following implementation of early Affordable Care Act reforms, including expansion of coverage to young adults. National surveys in 2013 and early 2014 indicate further decline in the number of uninsured, providing continuing positive news. As of March 2014, 5 million people had selected a plan through the new marketplaces and 10.3 million adults and children had been determined eligible for Medicaid and the Children’s Health Insurance Program (CHIP). With reforms to ensure more comprehensive benefits, there is the potential to improve affordability across states.

For the first time, the nation has committed resources with the goal of achieving near-universal coverage with financial protection to ensure care as well as insurance is affordable. These are ambitious goals given the wide geographic gaps in coverage and affordability evident before reforms took hold. This report provides state-by-state baseline data to assess changes in coverage and affordability and compare states as reforms are implemented.