The Values and Experiences That Could Shape Health Reform

If health care is a top concern, why is health reform so challenging?

Recent polls show health care is the top issue for many Americans. While millions have gained insurance coverage in the decade since the Affordable Care Act took effect, others remain uneasy about their ability to get the health care they need. With prices surging for prescription drugs and other out-of-pocket costs on the rise, many people worry they are a serious illness or surprise bill away from a personal financial crisis or even bankruptcy.

Allaying these fears is no easy task, however. In an American political system resistant to changes in the status quo, reforming health care can be a monumental challenge. To break through and win public support, proposals to remake U.S. health care must not only address the problems that Americans experience directly, they must also align with their core values and beliefs.

In fact, when it comes to health care, deeply held values often guide our policy preferences, sometimes even more so than our experiences and concerns with the current health system. How Americans respond to a reform plan may depend on whether they believe health care is a right — and whether they feel everyone should have equal access to care. There are a host of additional questions at play as well: How important is it to expand or limit the choices available to people? What are the proper roles of government and private business in health care? How much of the cost should people bear when they are healthy or sick, young or old, rich or poor?

To learn how people’s values align with their experiences and with their views on reform, the Commonwealth Fund, the Harvard T.H. Chan School of Public Health, and the New York Times commissioned a telephone survey of more than 2,000 U.S. adults during the summer of 2019. Below we highlight some of their responses, with the hope they might inform the ongoing political debate over how to improve health care in America. 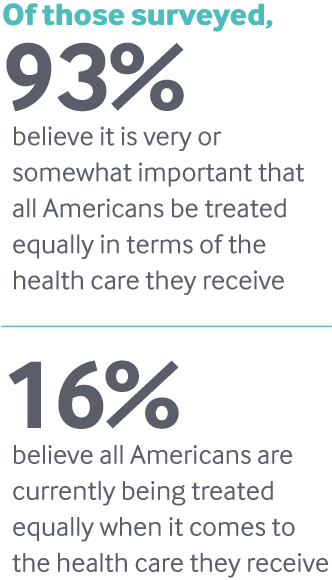 There is a clash between what we value and how we experience health care in America.

Equal treatment is a value widely shared by Americans. The vast majority of those we surveyed (93%) believe that, with regard to health care, it’s very or somewhat important that “all Americans are treated equally” — and without regard to income or race. Nearly all (95%) said it’s very or somewhat important that poor families receive the same quality of health care as rich families, and nearly all (96%) felt the same when asked whether African Americans should receive the same quality of care as white Americans.

Further, a majority of the public supports a right to health care. Nearly eight in 10 respondents to the survey endorsed the statement that “all Americans should have a right to health care regardless of ability to pay.” Support for this principle was high irrespective of age, gender, race, ethnicity, income, or past education.

Unfortunately, the day-to-day experiences of Americans fall short of these values. A majority of Americans don’t believe that today’s health system treats people equally (only 16% believe treatment is equal). Meanwhile, nearly half of Americans (49%) are very or somewhat dissatisfied with the costs of their care, with dissatisfaction higher among people under 65 (who are not yet eligible for Medicare), those who are uninsured, and those in the middle of the income range (earning between $50,000 and $74,900 a year). And about one-quarter of Americans are very or somewhat dissatisfied with their ability to get care when they need it, with larger shares of people under 65 and people without insurance reporting this.

How can we design a health care system that aligns with our values?

Our survey shows that most Americans believe the government should play some role in health care. For example, eight in 10 have a favorable view of the Medicare program, which insures adult 65 and over and people with serious disabilities. Seven of 10 also have a favorable view of Medicaid, which covers low-income adults and children and people needing long-term services and supports.

Moreover, about 60 percent of Americans believe that government regulation of businesses and corporations is necessary to protect the public. About the same, 59 percent, would support increasing taxes on higher-income people so that everyone could have health insurance, while 53 percent would personally be willing to pay more in taxes so that everyone could have insurance.

However, the public seems to view government intervention in health care as a double-edged sword. Americans overall tend to be skeptical that government can run things well, although views are mixed on this. In our survey, a majority (56%) agreed that “when something is run by the government today, it is generally run not too well or not well at all.” And less than half (44%) said they would prefer a health insurance system run mostly by the government. At the same time, 68 percent of respondents hold favorable views of private employer-sponsored insurance, similar to the favorable views of Medicare and Medicaid.

How do we thread the needle on health reform?

As our survey shows, there is a dissonance between the values most Americans expect to see reflected in health care and their experiences with a system that fails to treat people equally and falls seriously short in guaranteeing all have a right to health care regardless of ability to pay.

Dissatisfaction with the costs and fairness of health care is fueling a desire among many in America to see reforms beyond those the Affordable Care Act put in place. But the survey results also suggest an ambivalence about the role government should play. This ambivalence seems to be heightened when people are presented with a new program or plan but tends to gradually evaporate as programs become established.

Indeed, wide familiarity with public programs appears to breed acceptance and neutralize any skepticism about government’s capabilities, at least with regard to health care. Certainly Medicare and Medicaid, which together cover more than 130 million Americans, have grown in popularity over time. The ACA, too, may be spurring additional confidence in government’s role in health care: a majority of Americans (53%) now see the 2010 health care law in a favorable light. In addition, 56 percent of Americans believe it is the responsibility of the government to make sure all Americans have health insurance coverage, up from 42 percent in 2014.

Perhaps it’s because private health insurers are playing a larger and larger role in operating Medicare and Medicaid (think Medicare Advantage and Medicaid managed care plans) that the public no longer experiences these programs as “run by government.” In any case, Americans seem quite comfortable with health care provided by a mix of private business and government programs.

Government’s other key role in health care is protecting the public and ensuring a fairer system. The majority of survey respondents supports regulation. These results are corroborated by other polling data showing that 61 percent of Americans think the amount of government regulation of business and industry is either just right or even too little; just five years ago, the share believing this was 49 percent. Fairness also matters: a majority of Americans would accept higher taxes to ensure everyone has health insurance.

The Health Care in America survey was conducted for the Commonwealth Fund, the New York Times, and the Harvard T.H. Chan School of Public Health by SSRS, an independent research company. Interviews were conducted by telephone (cell phones and landlines) in English and Spanish from July 10 to August 11, 2019, among a nationally representative, probability-based sample of 2,005 randomly selected adults age 18 and older. The results were weighted to reflect the demographics of the national adult population as described by the U.S. Census. The margin of error for the full sample is ±2.5 percentage points.

What is the path forward?

The politics of federal health reform have been contentious for more than a century. [See Paul Starr, Remedy and Reaction: The Peculiar American Struggle over Health Care Reform, rev. ed. (Yale University Press, 2013).] Some hard-won reforms have produced dramatic improvements in access to care, such as the 1946 Hill-Burton Act, which enabled the building of hospitals throughout the country, and the enactment of the Medicare and Medicaid programs in 1965, which extended insurance to millions of elderly and poor Americans. The dawn of the current century saw the enactment of smaller-scale programs to expand coverage for low-income children (in 1997) and create a prescription drug benefit for Medicare beneficiaries (in 2003).

But attempts at large-scale, comprehensive change, such as President Clinton’s 1993 overhaul plan, have foundered. While the ACA is larger in scope than some of those earlier reforms — and has led to significant improvements in the availability and quality of coverage and care for millions of Americans — additional reforms will be needed to close the gaps in access and affordability that remain.

If anything, the examples of successful reforms cited above suggest that closing the gap between what people value about health care and the experience of health care today can produce meaningful improvements in people’s lives. Such reforms appear to be more palatable to the public when they address persistent concerns about the ability to obtain affordable care, and when they acknowledge American ambivalence about government’s stewardship of the health care system. New public policies that weave together and build on the complementary strengths of the public and private sectors may be especially well aligned with the nuances of American thinking about health care.