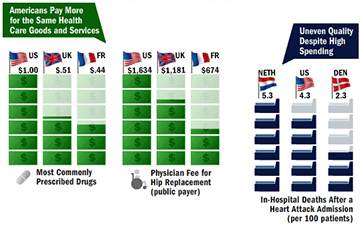 This analysis uses data from the Organization for Economic Cooperation and Development and other sources to compare health care spending, supply, utilization, prices, and quality in 13 industrialized countries: Australia, Canada, Denmark, France, Germany, Japan, the Netherlands, New Zealand, Norway, Sweden, Switzerland, the United Kingdom, and the United States. The U.S. spends far more on health care than any other country. However this high spending cannot be attributed to higher income, an older population, or greater supply or utilization of hospitals and doctors. Instead, the findings suggest the higher spending is more likely due to higher prices and perhaps more readily accessible technology and greater obesity. Health care quality in the U.S. varies and is not notably superior to the far less expensive systems in the other study countries. Of the countries studied, Japan has the lowest health spending, which it achieves primarily through aggressive price regulation.