Does Medicaid Make a Difference?

As millions of Americans gain Medicaid coverage under the Affordable Care Act, attention has focused on the access to care, quality of care, and financial protection that coverage provides. This analysis uses the Commonwealth Fund Biennial Health Insurance Survey, 2014, to explore these questions by comparing the experiences of working-age adults with private insurance who were insured all year, Medicaid beneficiaries with a full year of coverage, and those who were uninsured for some time during the year. The survey findings suggest that Medicaid coverage provides access to care that in most aspects is comparable to private insurance. Adults with Medicaid coverage reported better care experiences on most measures than those who had been uninsured during the year. Medicaid beneficiaries also seem better protected from the cost of illness than do uninsured adults, as well as those with private coverage.

The rapid expansion of Medicaid enrollment since the enactment of the Affordable Care Act has focused attention on the access to care, quality of care, and financial protection afforded by Medicaid coverage.1 To explore these questions, we analyzed data from the Commonwealth Fund Biennial Health Insurance Survey, 2014, which surveyed a nationally representative sample of Americans about their health care experiences from July to December 2014. This brief compares the experiences of adults ages 19 to 64 who have been insured continuously for the previous 12 months and who either had private insurance (through an employer or the individual market) or Medicaid at the time of the survey. We also examine experiences of adults who have been uninsured for some time during the past 12 months, regardless of their current coverage status. Because the three groups differ on a number of demographic characteristics, findings were adjusted for age, gender, race/ethnicity, income, and health status (Table 1).

The survey asked respondents about their access to preventive health services, perceived quality of care, the responsiveness of their providers, and whether their care was coordinated among providers. Medicaid enrollees were as likely as those with private insurance, and significantly more likely than uninsured adults, to report having a regular source of care (Exhibit 1).2 Medicaid enrollees rated the quality of their care as highly as privately insured adults, and significantly better than uninsured adults. When they were last sick and needed an appointment with a doctor or nurse, Medicaid enrollees were significantly more likely than those who were uninsured during the year to say they had been seen by a doctor or nurse the same or the next day, and nearly as likely as privately insured adults.3 The same pattern held for reports about how often medical staff were familiar with patients’ medical history and coordinated their care with other doctors; those with Medicaid reported better experiences than those who had lacked coverage during the year and statistically equivalent experiences to privately insured patients (Exhibit 2). 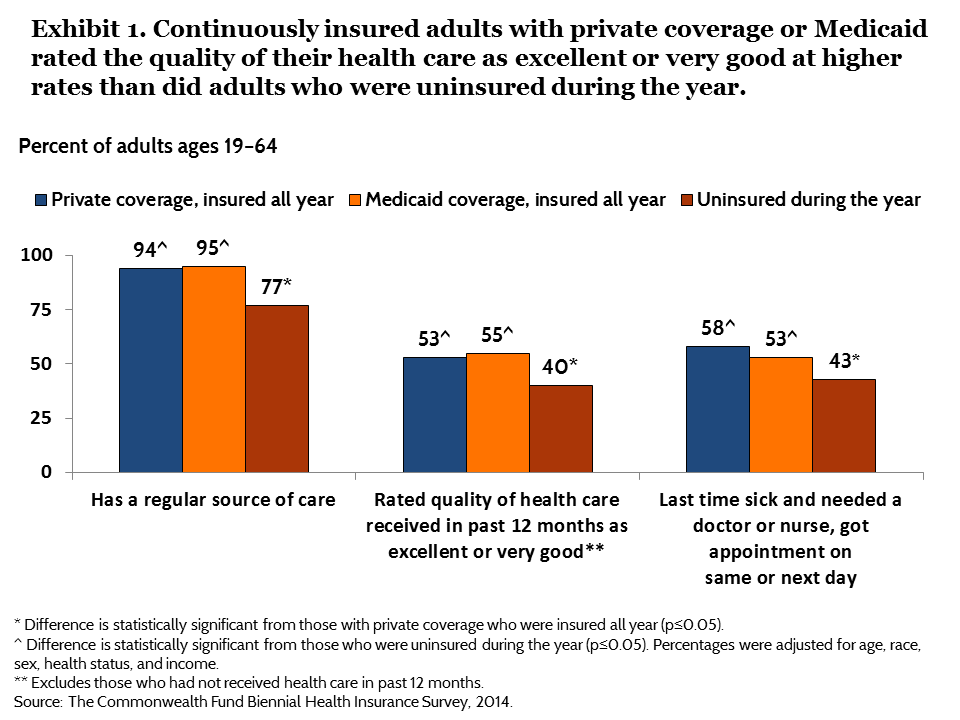 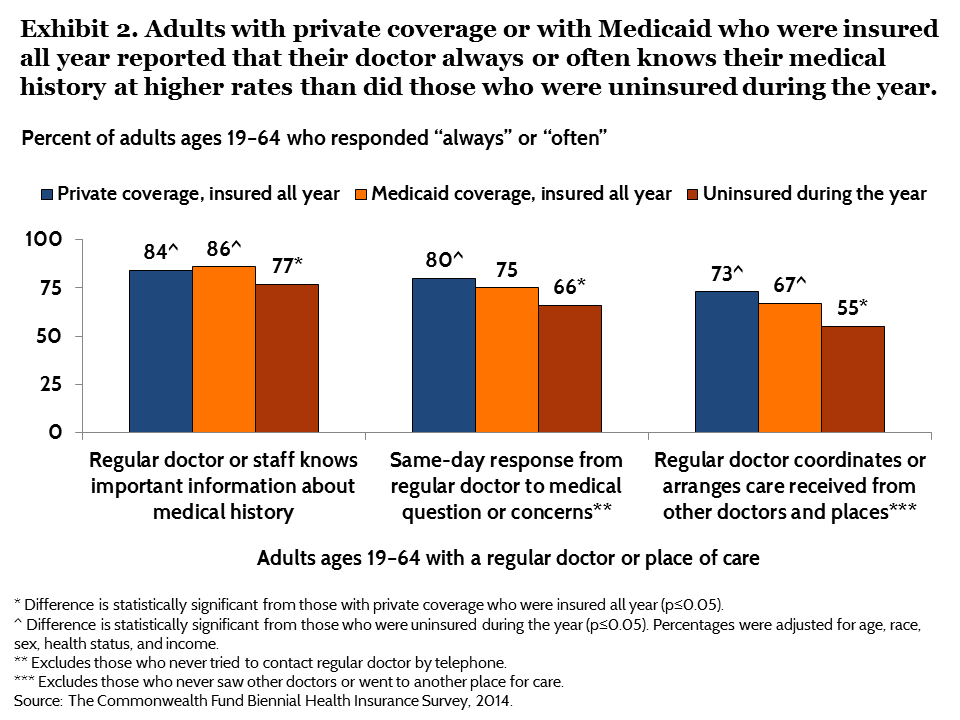 Survey respondents were asked whether they had received preventive and cancer screening services—blood pressure and cholesterol checks, and flu shots—in the recommended time frame (Exhibit 3). Compared with those who had been uninsured during the year, continuously insured adults with Medicaid coverage were significantly more likely to report having received these services. Those with private coverage reported getting care at slightly higher rates than those with Medicaid, but the differences were not statistically significant. 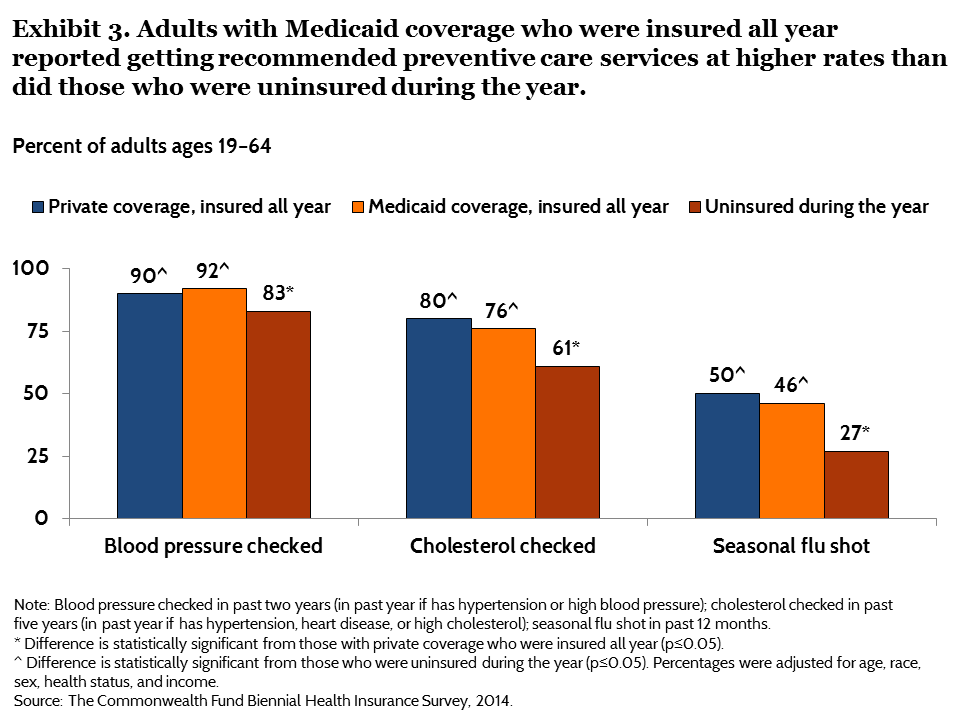 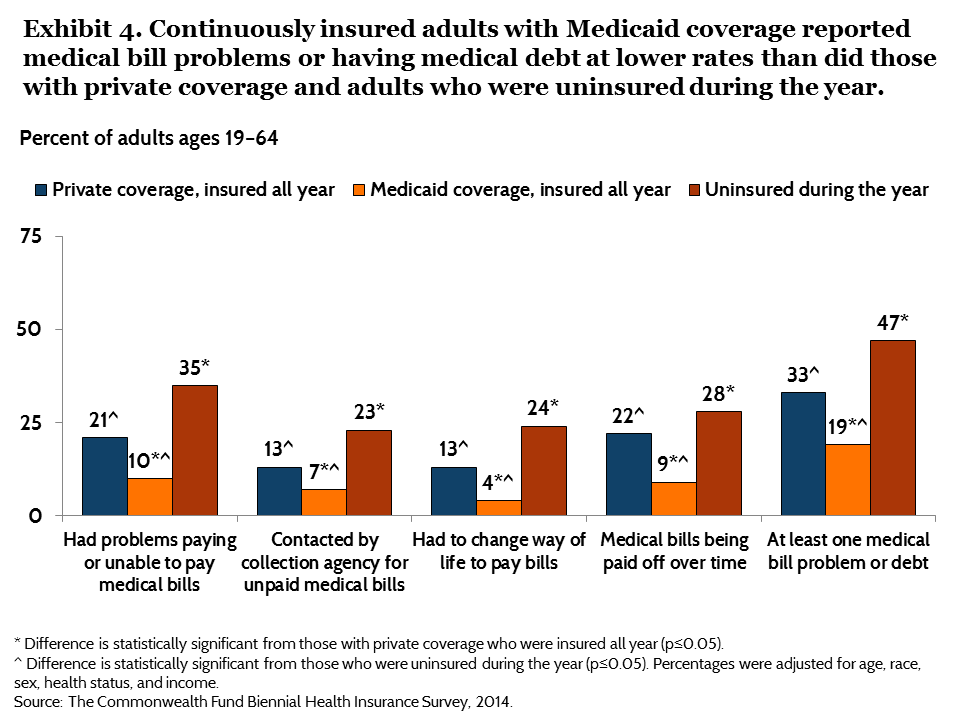 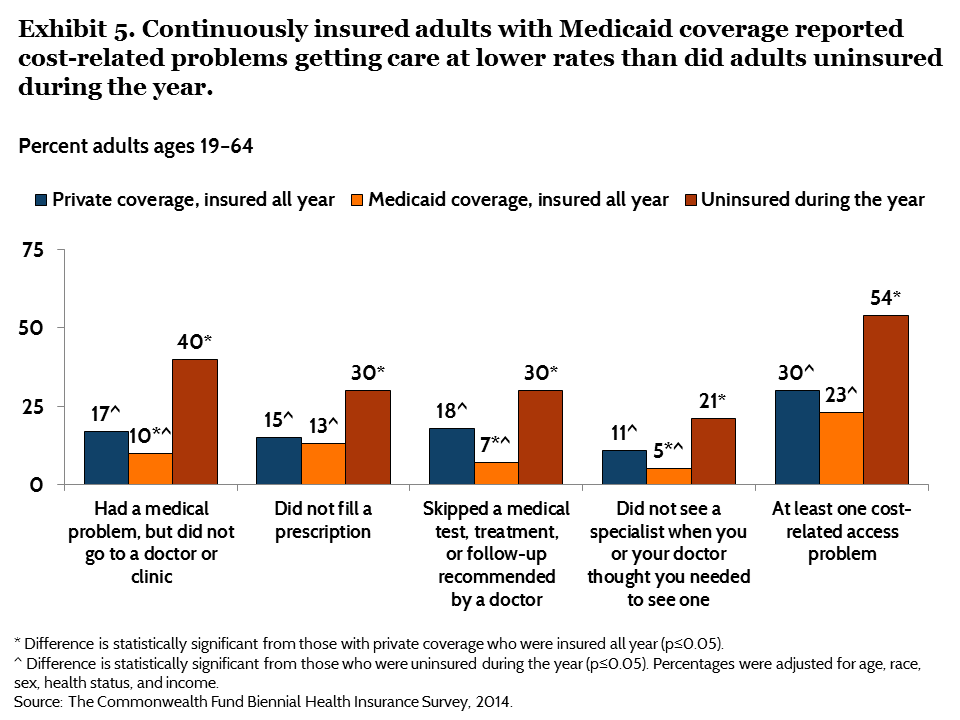 LIMITATIONS OF THIS STUDY

Our findings have certain limitations. They do not shed light on whether Medicaid or private insurance improves health outcomes for adults, or whether one type of insurance is more effective in this regard than the other. The analysis also focuses on adults with Medicaid or private insurance who had continuous coverage during the year prior to our survey. Medicaid and privately insured adults who lose eligibility during a given year may have somewhat different experiences from those described here. Still, comparing the experiences of those with continuous coverage, while controlling for demographic characteristics and health status, enables us to isolate the effects of insurance on health care quality and access.

The results from the Commonwealth Fund Biennial Health Insurance Survey, 2014, suggest that people with Medicaid coverage have better access to health care services, including proven preventive care, and fewer medically related financial burdens compared with those who lack insurance. Our findings also suggest that, compared to those with private coverage, Medicaid enrollees have nearly equivalent levels of access to care on many important dimensions. Medicaid coverage also appears to offer better financial protection than private insurance against the cost of illness. This last observation may reflect the steady increase in recent years in many private plans’ deductibles and copayments.

1 As of March 2015, 12.2 million additional people had enrolled in Medicaid or the Children’s Health Insurance Program since October 2013; https://www.medicaid.gov/medicaid/program-information/downloads/2015-march-enrollment-report.pdf.

2 All reported differences are statistically significant at the p≤0.05 level or better, unless otherwise noted.

3 Difference between privately insured and those with Medicaid coverage is not statistically significant.

Notes: The total includes some adults who were not looked at in the study, including those who were insured all year
but had Medicare or did not name their coverage but said they were insured.
* Privately insured adults include those with employer-provided insurance, marketplace coverage, or a private plan
they purchased outside of the marketplace.
** Combines those who were “Insured at the time of the survey but uninsured in the past 12 months” and those who
were “Uninsured at the time of the survey.”
^ At least one of the following chronic conditions: hypertension or high blood pressure; heart disease; diabetes; asthma,
emphysema, or lung disease; or high cholesterol.
^^ Base: Full- and part-time employed adults ages 19–64.
Source: The Commonwealth Fund Biennial Health Insurance Survey, 2014.