Issue: The incoming Trump administration and Republicans in Congress are seeking to repeal the Affordable Care Act (ACA), likely beginning with the law’s insurance premium tax credits and expansion of Medicaid eligibility. Research shows that the loss of these two provisions would lead to a doubling of the number of uninsured, higher uncompensated care costs for providers, and higher taxes for low-income Americans.

Goal: To determine the state-by-state effect of repeal on employment and economic activity.

Methods: A multistate economic forecasting model (PI+ from Regional Economic Models, Inc.) was used to quantify for each state the effects of the federal spending cuts.

Findings and Conclusions: Repeal results in a $140 billion loss in federal funding for health care in 2019, leading to the loss of 2.6 million jobs (mostly in the private sector) that year across all states. A third of lost jobs are in health care, with the majority in other industries. If replacement policies are not in place, there will be a cumulative $1.5 trillion loss in gross state products and a $2.6 trillion reduction in business output from 2019 to 2023. States and health care providers will be particularly hard hit by the funding cuts.

President-elect Donald Trump and Republican leaders of Congress seek to repeal and replace the Affordable Care Act (ACA)—also known as Obamacare—in 2017. A likely strategy is to repeal two key elements of the health reform law: the insurance premium tax credits and the expansion of Medicaid eligibility. A bill passed by Congress in 2015 (H.R. 3762) sought to do just that beginning in 2018—with no replacement plan—but it was vetoed by President Obama. The new Congress could pass a repeal bill in early 2017 but not develop a replacement bill until later.1

Recent analyses show canceling the ACA’s tax credits and Medicaid expansion would double the number of uninsured Americans.2,3 As millions lose their insurance, hospitals and other providers would see their uncompensated medical care costs soar by $1.1 trillion from 2019 to 2028, and they would experience major revenue losses as well.

But repeal could also have much broader economic repercussions. Our analysis examines the potential economic and employment effects of repealing the ACA’s tax credits and Medicaid expansion, without a replacement plan, for every state and the District of Columbia. We estimate changes in:

Although the ACA dramatically lowered the number of uninsured,4,5 Republican leaders believe that the law is harmful and are committed to its repeal.6 A plausible scenario is that, in 2017, Congress passes a budget resolution requiring the repeal of key ACA provisions. This would be accomplished through a reconciliation bill that could be passed by simple majorities in the House of Representatives and the Senate—the strategy used to pass H.R. 3762 in 2015. Numerous Republican replacement policies have been suggested, though a consensus has yet to emerge.7 Thus, Congress may pass repeal in early 2017, with implementation delayed for a couple of years, but replacement policies are likely to be developed much later.

Because plans for replacement are unresolved, we focus on the repeal of federal premium tax credits and Medicaid expansion. Key elements of the current policies are:

Health care will comprise almost one-fifth (18.5%) of the nation’s economy by 2019.9 As such, major changes to health care will reverberate across other parts of the economy.

These economic consequences can be projected by analyzing how funding flows from the federal government to states, consumers, and businesses. As illustrated in Exhibit 1, federal tax credits first flow to health insurers. Most of the money, aside from carriers’ overhead, flows to hospitals, clinics, pharmacies, and other providers. Similarly, federal funding supports state Medicaid programs, which pay health care providers. These are the direct effects of federal funding. 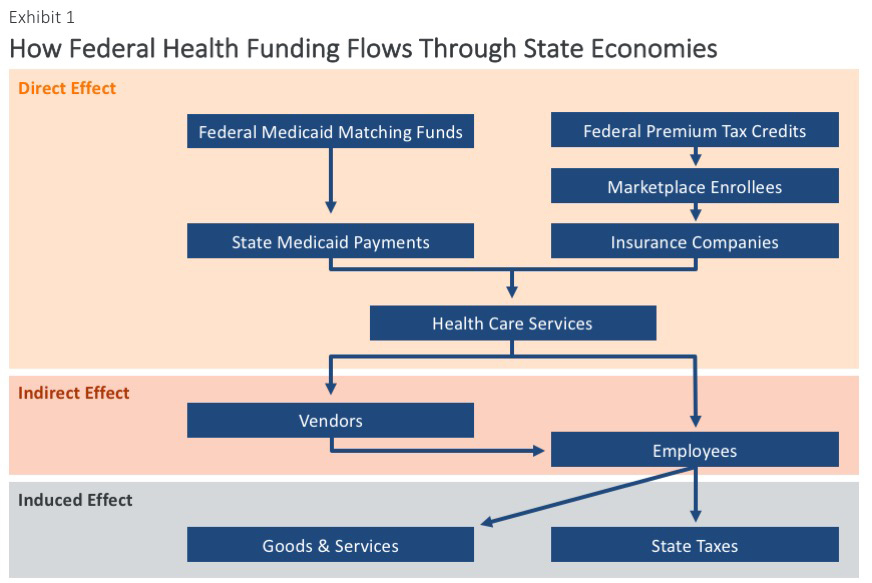 Most of the revenue earned by health care providers is used to hire and pay staff and to purchase goods and services, like clinic space or medical equipment. In turn, those vendors pay their employees and buy additional goods and services. This is the indirect effect of federal funding.

The induced effect is manifested as workers use their incomes to pay for food, mortgages, rent, transportation, and other goods and services, which provides income to other businesses.

Federal funding thus initiates an economic cycle that ripples throughout the economy, both within and across state borders. The gains from this cycle also generate additional state and local tax revenues. When federal funds are cut, the results play out in the other direction, triggering losses in employment, economic activity, and state and local revenues.

To conduct our analysis of repeal’s potential impact, we first projected the level of federal funding for tax credits and state Medicaid expansions that would be cut through repeal. A multistate economic model (PI+ from Regional Economic Models, Inc.) quantified the effects for each state. (See “Summary of Study Methods” below. Detailed methods and data sources are available in the full version of this analysis, The Economic and Employment Consequences of Repealing Federal Health Reform: A 50 State Analysis, available at https://publichealth.gwu.edu/sites/default/files/downloads/HPM/Repealing_Federal_Health_Reform.pdf.)

It is important to note that other health policy changes, or even changes to tax policy, could modify our projections. We focus on these two repeal policies alone because it is not yet clear what additional policy changes might be advanced.

As seen in Exhibit 2, repeal results in a $140 billion cut in federal funding for health care in 2019. This in turn leads to about 2.6 million jobs lost that year, rising to nearly 3 million by 2021. A third of these lost jobs are in health care, but the majority is in other industries such as construction, real estate, retail trade, and finance. Nearly all are private-sector jobs.

If replacement policies are not in position, state economic losses will rise. From 2019 to 2023, there will be a cumulative $1.5 trillion loss in gross state products and a $2.6 trillion reduction in business output (combined transactions at the production, wholesale, and retail levels).

State and local tax revenues also will fall during this period, dropping by $48 billion. State and local governments could be faced with declining revenues, and safety-net health care providers would see their uncompensated care costs rise sharply as millions of people lose their insurance.

The effects are similar but smaller when the two repeal elements are considered separately. Exhibit 3 shows that tax credit repeal cuts federal funding by $341 billion from 2019 to 2023. This leads to 1.1 million fewer jobs in 2019 alone. Gross state products shrink by $623 billion over five years and state and local tax revenues fall by $21 billion.

Exhibit 4 shows how canceling states’ Medicaid expansions lowers federal funding by $466 billion from 2019 to 2023. This leads to 1.5 million fewer people with jobs in 2019. Moreover, gross state products shrink by nearly $900 billion and state and local tax revenues drop by $29 billion.

The majority of these losses occur in the states that have expanded Medicaid (31, plus the District of Columbia), with nearly 1.2 million jobs lost in 2019. However, the 19 states that have not expanded Medicaid also experience major setbacks: collectively, they lose about 338,000 jobs in 2019, even though they do not receive the direct federal matching funds for Medicaid expansion.

For example, although Utah has not expanded Medicaid, federal repeal causes the state to lose nearly 9,000 jobs in 2019 (Exhibit 5). Medicaid expansion in other states—like nearby Colorado, Arizona, Nevada, New Mexico, and California—spurs economic growth in those states. But because businesses and individuals there also buy goods and services from Utah firms, Utah’s economy benefits, too. Ending Medicaid expansion therefore creates losses for Utah and other nonexpanding states.

Data for eight selected states, five of which have expanded Medicaid and three of which have not, are shown in Exhibit 5. In the five expansion states, the majority of lost jobs and economic activity are caused by Medicaid expansion repeal. In the other three states, the majority of losses are caused by tax credit repeal. Nonetheless, all eight states experience serious losses when tax credits and Medicaid expansions disappear. Appendix Tables A1 to A4 (click here), summarize results for every state.

Repeal of key parts of the Affordable Care Act would lead to major cuts in federal assistance for health care, thereby triggering major losses in employment and serious economic dislocations in all states. These losses would not be limited to hospitals, clinics, and patients; they would have widespread repercussions for businesses and workers as well, affecting multiple sectors of each state’s economy. Because economic benefits and losses flow across state lines, even states that did not expand Medicaid would experience losses if Medicaid expansions were canceled.

These findings are noteworthy in part because of the common (and debunked) concern that Obamacare has been a “job killer.”10 Evidence shows that job growth has been robust since the ACA was implemented and the economy has thrived.11

The economic burdens for states and health care providers will be particularly detrimental. Because they serve so many uninsured and Medicaid patients, safety-net facilities such as hospitals and community health centers could be especially hard hit. Recent studies demonstrate that Medicaid expansions are associated with lower uncompensated care burdens for hospitals and with increased capacity at nonprofit community health centers, signaling the adverse consequences of reversing them.12,13 In the end, states could be forced to choose between cutting vital services and raising tax rates.

An important question post-repeal will be what policies might replace existing ones. Some conservatives have recommended the broader use of health insurance tax deductions, in lieu of tax credits, whether for all health coverage or specifically for tax-advantaged health savings accounts (HSAs).14 While tax deductions can lower costs for higher-income individuals, who have higher marginal tax rates and already are mostly insured, they offer little help to people with low or moderate incomes, who are far more likely to lose their insurance and access to health care if premium tax credits and Medicaid expansions disappear.

Analyses by the RAND Corporation found that the broader tax deductions recommended by the Trump team during the presidential campaign would increase federal costs, with little gain in insurance coverage.15 Any savings would primarily help those with higher incomes. The ACA’s reforms, on the other hand, target assistance to low- and moderate-income families, who use the savings to meet basic needs like housing, food, and transportation. Moreover, such spending creates greater economic stimulus than tax deductions that disproportionately benefit wealthier individuals, who are likely to shift more money into savings, which is less stimulative.

Another key question is whether additional states would be able to expand their Medicaid programs prior to repeal. Some of these states might be more interested in doing so under a Republican administration if they believe they would have more flexibility in designing their expansion. A related question is whether federal funding for expansion would be continued after repeal goes into effect. Speaker of the House Paul Ryan has proposed converting Medicaid into a block grant that would provide more limited funding to states in the future.16 Presumably, states’ federal block-grant funding levels would be based on federal payments for a baseline period. Would Medicaid expansion funds be included in state baselines under block grants so that states could continue to offer expanded coverage in the future? Such an approach could limit some of the economic damage, but current plans in Congress are not clear.

Recent analyses have indicated that ACA repeal could double the number of uninsured Americans, reduce access to health services, and increase burdens for health care facilities.17,18 This analysis demonstrates that the consequences could extend well beyond the health care system, triggering major reductions in employment and substantial losses in state economic activity and reduced state and local revenues. And these repercussions are likely to reverberate across all states and most sectors of the economy.

11 Council of Economic Advisers, “The Economic Record of the Obama Administration: Reforming the Health Care System,” The White House Blog, Dec. 13, 2016; and C. Schoen, The Affordable Care Act and the U.S. Economy: A Five-Year Perspective (The Commonwealth Fund, Feb. 2016).