More than 70 percent of Medicare Advantage enrollees shop for coverage in highly concentrated markets; without competition to keep prices in check, taxpayers and beneficiaries will overpay for plans

Concentration in Medicare Advantage markets between 2009 and 2017 may have been driven by consolidation in the health insurance industry generally, concentration in provider markets, and Medicare policy changes

Medicare Advantage (MA), the private option to traditional Medicare (TM), now serves roughly 37 percent of beneficiaries through health care plans. Federal subsidy of the premiums of MA plans is intended to create a “level playing field,” so that the government pays MA plans based on what beneficiaries would typically cost in TM. This approach is based on Alain Enthoven’s concept of “managed competition,” wherein private plans that provide better benefits and higher-quality care at a lower price than TM would attract beneficiaries. Two elements are needed for this approach to work: a sound payment policy and effective competition among the private plans. This issue brief examines the latter.

Recent data show that many MA markets are served by just one or a small number of insurers.1 In 2012, 97 percent of county markets in the MA program were designated as highly concentrated according to the definitions used by the Federal Trade Commission (FTC) and the U.S. Department of Justice (DOJ), with a Hirschman-Herfindahl Index (HHI) of greater than 2,500.2 In 2016, the Medicare Payment Advisory Commission observed that local markets for MA plans were becoming increasingly concentrated.3 Recently, courts have blocked mergers that would further erode competition within the MA market.4

This issue brief updates information about the market structure in the MA program. We report on traditional measures of market structure, such as concentration ratios and the HHIs, and a simple count of the number of insurers offering plans in a market. We also include the “two-firm concentration ratio,” or the share of enrollment accounted for by the top two firms. We also offer new perspectives on competition in MA. First, we comment on competition and choice from the standpoint of a beneficiary by examining the number of plans available. Second, we introduce the idea of “potential competition” in an MA market. Potential competition, like actual competition, can constrain market power. Third, we consider the role of TM in constraining the market power of MA insurers.

News stories about consumers’ choices among Medicare Advantage plans often begin with a statement such as “On average, seniors will have a choice of 21 plans, although at least 40 plans will be accessible in some counties and large metropolitan areas of the country.”5 But such accounts give a misleading indication of competition in the MA program, because many insurers offer multiple health plan products in the same market. In this issue brief, we measure the number of MA plans but also focus on the number of different insurers in the market to assess competition at the insurer level.

An insurer needs to be wary of potential as well as actual competitors. Insurers that set premiums high may enable competitors to gain footholds in a market. A market is said to be “contestable” if it is relatively easy for a potential entrant to contest for market share.6 Barriers to entry, the magnitude of one-time entry costs, and the availability of comparably efficient technology all influence contestability of a market. Here, we identify “potential competitors,” or insurers that are in a position to contest a county-defined market and therefore pose a competitive threat to incumbents. Insurers licensed to operate MA plans in a state have already crossed some local regulatory barriers and contract with some local providers. We therefore measure potential competition by the number of health insurers participating in some MA markets within the state but not in a particular county.

As shown in Exhibit 1, in 2017 Medicare beneficiaries could choose from a relatively large number of private plans (roughly seven) by the standards of the private insurance market. The number of insurers declined from 2009 to 2011 then remained steady through 2017, averaging 2.5 in 2017. For comparison, in 2017, the average metropolitan area had two insurers competing in the health insurance marketplaces created by the Affordable Care Act.

Insurer concentration increased from 2009 to 2011 (the number of insurers selling MA plans fell from 4.5 to 2.9) then remained at about the same, high level of concentration. The two-firm concentration ratio was already high in 2009 (81%); it rose to 91 percent by 2011 and stayed there through 2017. The average county-level HHI was 4,914 in 2009, rising to 6,360 in 2013, and declining slightly to 6,285 in 2017. To put this in perspective, a market with two equal-size health plans would have an HHI of 5,000. The average MA market is therefore even more concentrated than that. Notably, the number of potential competitors also fell over the same period. Nevertheless there are now more potential than actual competitors in each county. 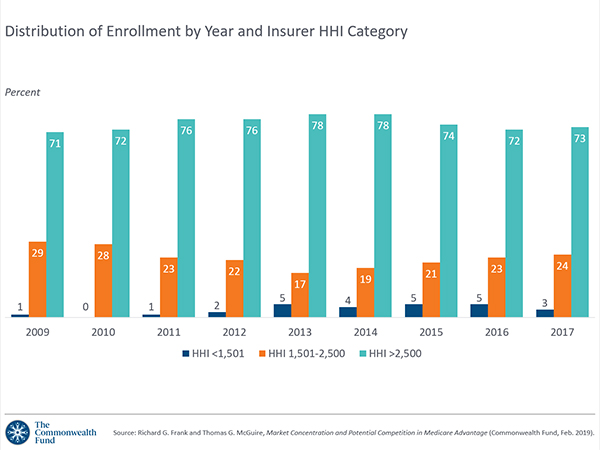 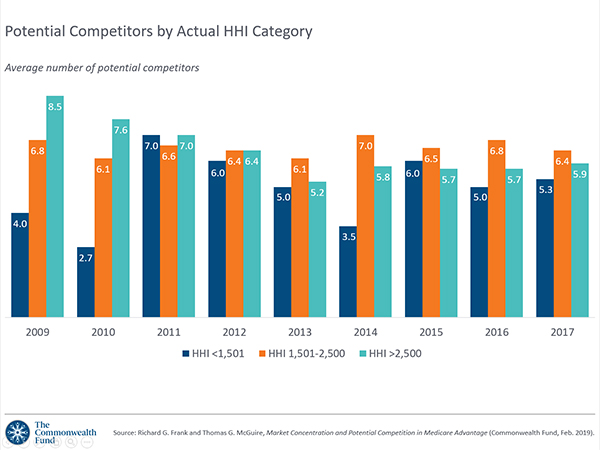 While Medicare beneficiaries have a choice between TM and MA, in assessing the competitive forces on MA plans we assume that the actual or potential competition from other MA plans matters most. The market position of an MA insurer in relation to TM received examination in connection with two recently proposed mergers, between Aetna and Humana and between Anthem and Cigna. The U.S. Department of Justice challenged these mergers on antitrust grounds, arguing that the proposed consolidations would threaten effective competition in MA. In the Aetna-Humana case, Judge Bates observed: “The weight of the evidence presented at trial indicates ‘industry [and] public recognition’ of a distinct market for Medicare Advantage. Competition within that market, between Medicare Advantage plans, is far more intense than competition with products outside of it.”7 While the role of traditional Medicare in affecting competition in the MA market deserves further analysis, competition among MA plans is where most of market discipline is likely to arise. While the presence of TM likely affects the conduct of MA plans, existing evidence suggests that the primary drivers of consumer choices are differences in the premiums, quality of care, and benefits among MA plans.8

Even though 37 percent of all Medicare beneficiaries are enrolled in private plans, when compared with employer-based health insurance Medicare’s transition to managed care has been slow. Traditional Medicare is the last major bastion of open-network, fee-for-service health insurance, although the fee-for-service component is beginning to change with the spread of accountable care organizations. Competition or lack thereof of in a market plays a role in accelerating or attenuating this shift. Consumer choices tend to be driven by the better value (premiums and quality) that can turn more favorable with increased competition.

Several forces may have driven greater concentration in MA markets since 2009. First, consolidation in the health insurance industry generally may have affected the MA market structure.9 Concentration in provider markets also has been increasing, which has made price negotiations for health care services more difficult for insurers, especially smaller ones.10 Medicare policy changes over these years may have inadvertently limited the supply and market entry of MA insurers. When Medicare rules were changed to require all MA plans to create networks of providers, the effect of provider concentration was heightened and some health insurers were less willing to remain in and/or enter MA markets. This effect may have been especially significant in rural areas.11 At the same time, there appears to be a substantial number of potential MA insurer entrants in most moderate to highly concentrated markets, yet there appears to have been little clear impact on market outcomes in terms of premiums and quality.

Together, the confluence of these forces continues to push MA markets in the direction of greater concentration. Since the payment system used to reimburse insurers selling in the MA market relies on competition to drive premiums toward insurers’ actual costs, these developments suggest that taxpayers and beneficiaries will overpay for MA products, compared with what they might have paid in markets with more robust competition.

A competitive market is intended to deliver good products to consumers at low prices. Ultimately, the effect of Medicare Advantage market power on prices or quality of care needs to be assessed empirically. There is some, but limited, evidence on the exercise of MA market power.12 Further research is needed to understand how potential competitors affect the actions of existing competitors. It also will be important to understand the barriers to market entry for potential competitors, especially those that might be lowered to spur greater competition.

We are grateful to the Commonwealth Fund for financial support and to Shawn Bishop and Eric Schneider from the Fund for helpful comments on an earlier draft. Christina Fu provided programming support for the data analysis.

2. An HHI, a standard measure of market concentration, is the sum of the squares of the market share of the firms. An HHI of 2,500 would mean there were four, equal-sized firms in a market, each with a 25 percent market share.

9. Leemore S. Dafny, “Health Insurance Industry Consolidation: What We Know from the Past, Is It Relevant in Light of the ACA and What Should We Ask?,” Testimony before the Senate Judiciary Committee, Subcommittee on Antitrust, Competition Policy, and Consumer Rights, Sept. 15, 2015. 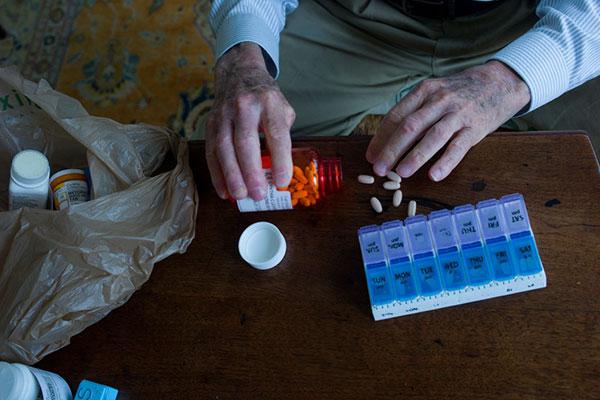 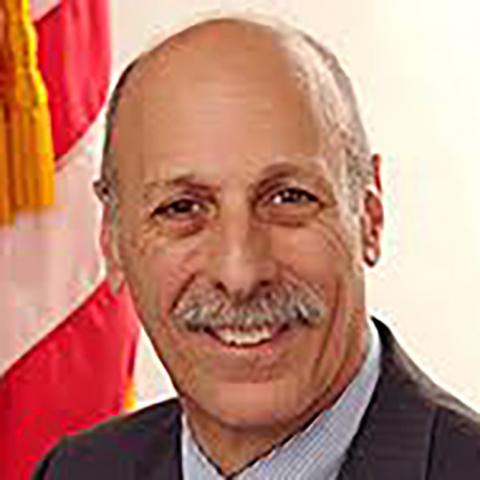 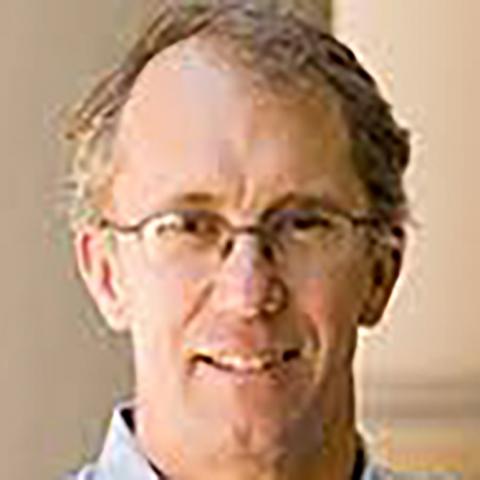