With more than 4 million confirmed cases and 150,000 deaths as of August, the United States is failing to control the COVID-19 pandemic. At a time when many nations are reopening their economies and societies, the U.S. is struggling in its attempts to do the same.

To examine the early impact of the pandemic on the well-being of adults in the U.S. and abroad, the Commonwealth Fund joined the survey research firm SSRS to interview 8,259 adults age 18 and older between March and May 2020. It is the latest in the Commonwealth Fund’s series of cross-national comparisons featuring the United States and nine other high-income countries that participate in the Fund’s annual International Health Policy Survey.

The following exhibits illustrate COVID-19’s effects on people’s mental health and economic security and compare levels of public trust in national leaders in responding to the pandemic. 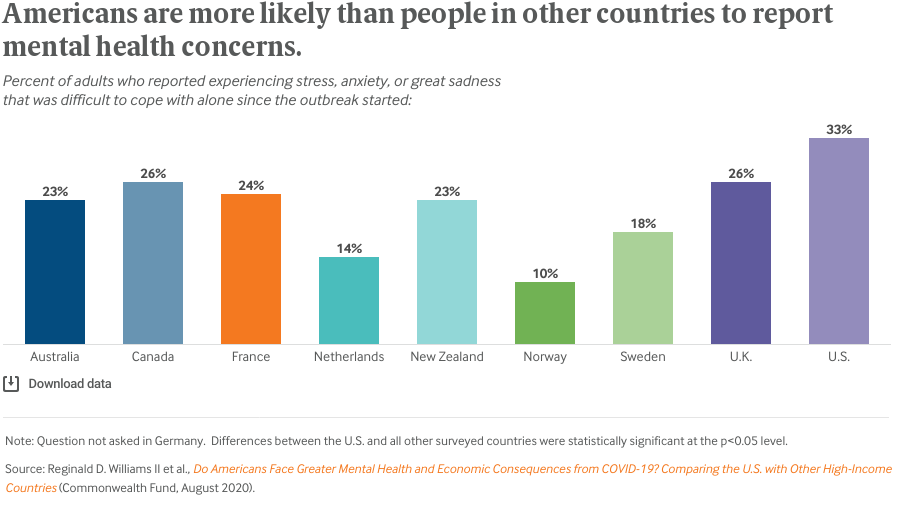 The negative impact of COVID-19 on mental health has been immediate, and the pandemic is certain to have long-term effects in every country it has touched. These ill effects have been exacerbated by uncertainty associated with the spread of the disease, information and misinformation overload, and feelings of isolation created by social distancing.

Our survey found that since the start of the outbreak, one-third of U.S. adults experienced stress, anxiety, or great sadness that was difficult to cope with by themselves. This is a significantly higher proportion than in other countries, where no more than one-quarter of adults reported the same. 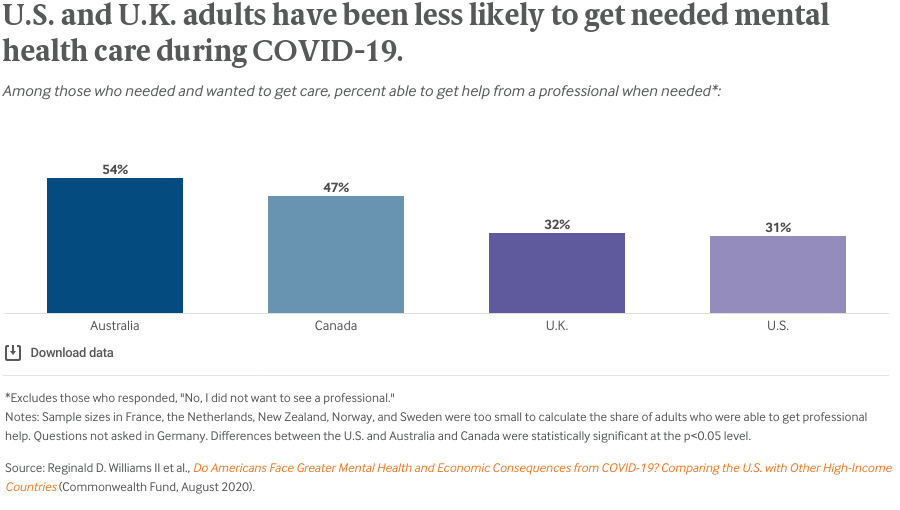 Since the pandemic started, just one in three adults in the U.S. and the U.K. reported being able to get help from a professional when feeling stress, anxiety, or sadness. In contrast, approximately half of Australians and Canadians were able to get needed help. 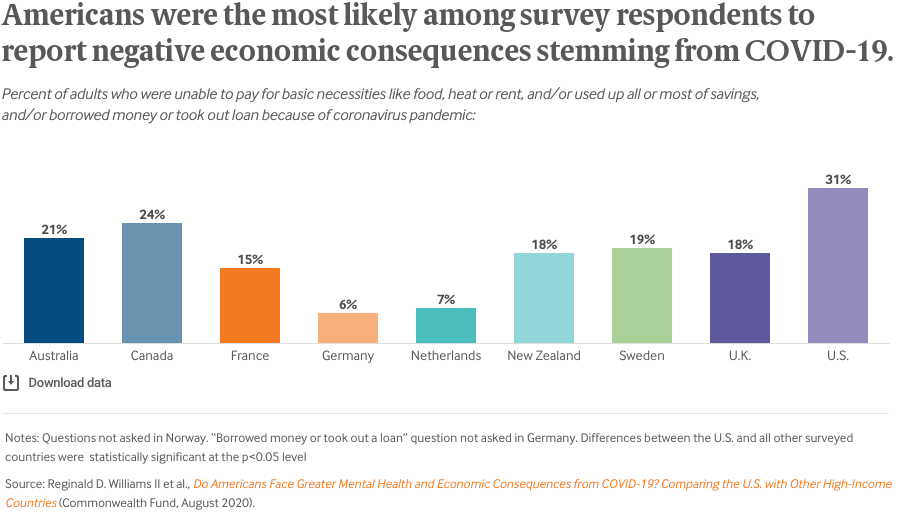 More than 30 percent of U.S. adults reported they’ve been faced with negative economic effects from the coronavirus pandemic, a significantly higher percentage than in any of the other countries. These effects include being unable to pay for basic necessities like food, heat, or rent; using up most personal savings; or borrowing money or taking out a loan.

Rates were also high in Canada (24%) and Australia (21%). Meanwhile, only 6 percent to 7 percent of German and Dutch respondents reported these financial hardships. 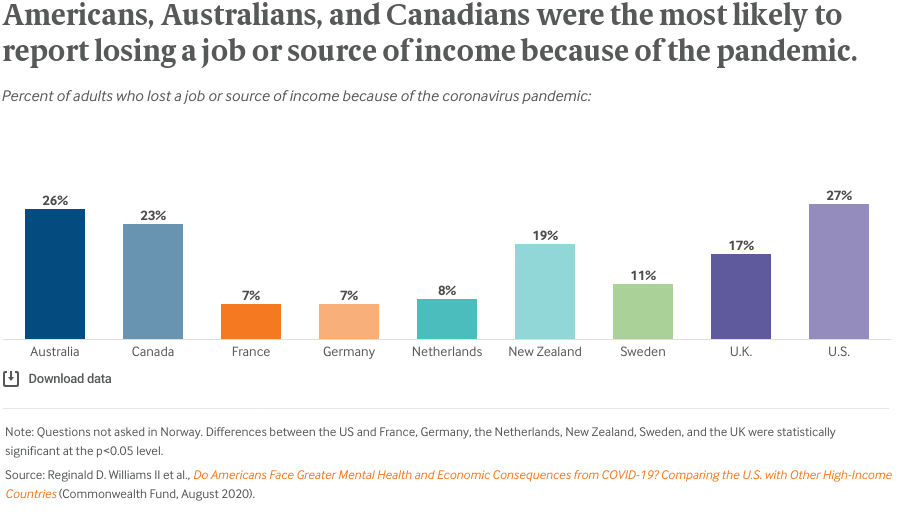 Across the globe, businesses have been forced to shut their doors to limit the spread of the virus, resulting in job losses and economic stagnation that have put hundreds of millions of people at financial risk. Many countries have taken swift actions to mitigate the economic impact. But while approximately one-quarter of adults in Australia, Canada, and the U.S. reported they had lost a job or source of income, just 7 percent to 8 percent said the same in France, Germany, and the Netherlands.

U.S. adults were significantly more likely than adults in France, Germany, Netherlands, New Zealand, Sweden, and the U.K to report losing a job or source of income. 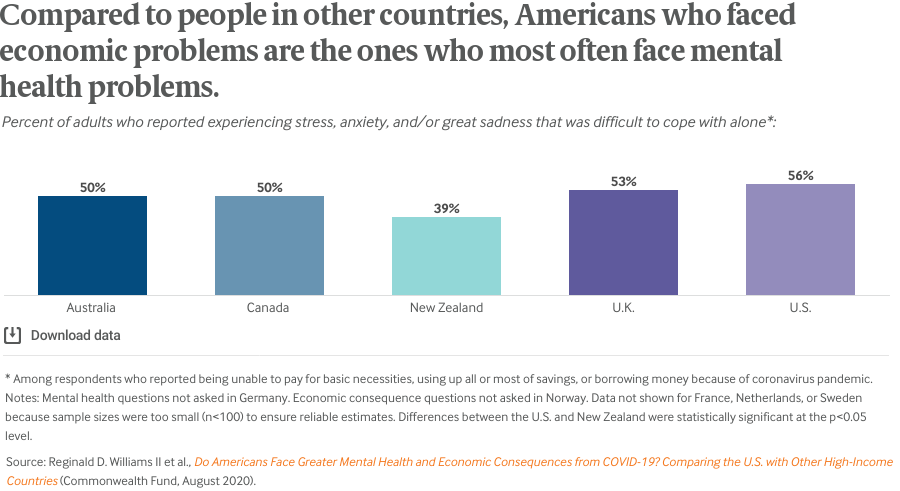 The pandemic’s economic toll has contributed to higher levels of mental distress in other places as well. In all five countries for which reliable estimates could be calculated, people who said they experienced any type of economic insecurity since the start of the outbreak were several times more likely to also report stress, anxiety, and great sadness that was difficult to cope with alone (data not shown). 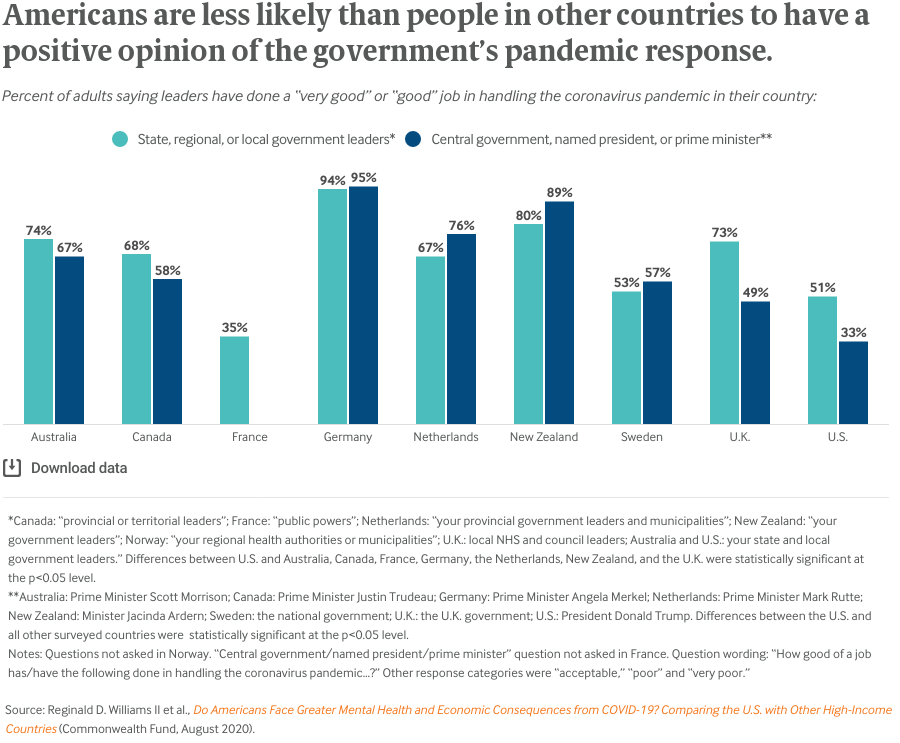 Only 33 percent of U.S. adults said President Trump has done a “good” or “very good” job of handling the coronavirus pandemic. In the other countries, at least 49 percent of respondents had positive views of how their president, prime minister, or central government has dealt with the crisis. Germany had the highest rate: 95 percent.

It should be noted that prior to the outbreak, levels of public trust in government and national leaders were already relatively lower in the U.S. than they were in the other high-income countries included in our survey.

Americans were also among the least likely, along with the French and Swedes, to report that their state, regional, or local government leaders have done a very good or good job at handling the pandemic. The rate was lowest in France (35%) and highest in Germany (94%). 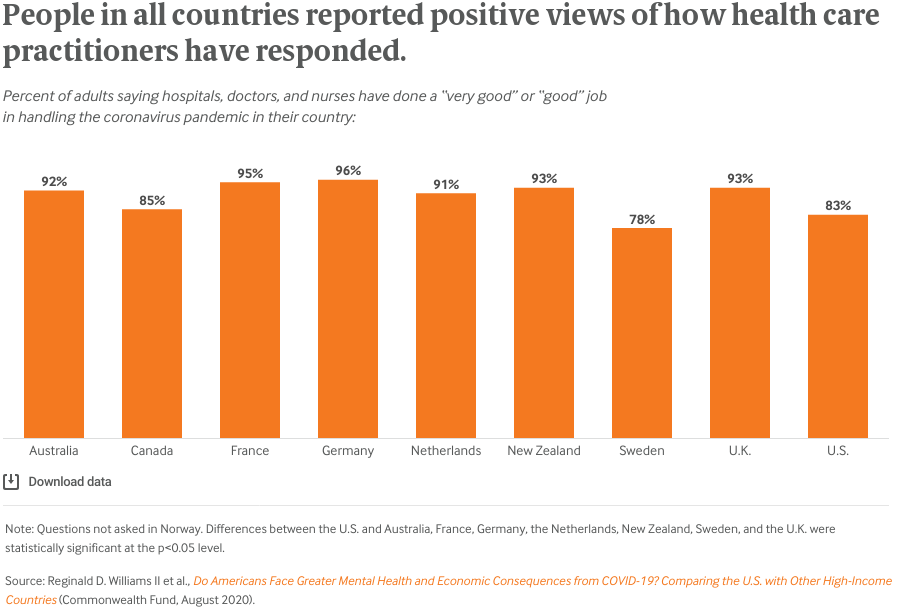 Across all countries, most people thought that hospitals, doctors, and nurses have done a very good or good job at handling the coronavirus pandemic. The share of people reporting this was significantly lower in Sweden (78%) than elsewhere. Rates were also relatively lower in the U.S. (83%) and Canada (85%). The highest rates were in France and Germany, at 95 percent and 96 percent, respectively.

The survey findings demonstrate that people in the U.S. face greater mental health and economic challenges from COVID-19 and have relatively lower levels of trust in national leadership compared to residents of other high-income countries. As the number of confirmed COVID-19 cases and deaths in the U.S. continues to swell, national, state, and local policymakers would be wise to look abroad for lessons learned and innovative strategies for dealing with the coronavirus.

The findings also show that the U.S. can do more to meet people’s mental health care needs. Steps could be taken to improve access to mental health services as well as integrate mental health treatment into primary care. In addition, there is a clear need to expand current efforts to improve the economic security of Americans and address social needs exacerbated by the pandemic.

The 2020 Commonwealth International Health Policy Survey was conducted by U.S. survey research firm SSRS and contractors in other countries from February to June 2020. The COVID Supplement was part of this larger survey and was in the field from March 30 to May 25, 2020, and administered to a nationally representative sample of adults ages 18 and older in Australia, Canada, France, Germany, the Netherlands, New Zealand, Norway, Sweden, the U.K., and the U.S.

In Australia, Canada, France, Germany, the Netherlands, New Zealand, the U.K., and the US, samples were generated using probability-based overlapping landline and mobile phone sampling designs; both mobile and landline telephone numbers were included to improve representativeness. Standard within-household selection procedures were used to increase the likelihood of reaching an eligible respondent for landline samples.

A common questionnaire was developed, translated, adapted, and adjusted for country-specific wording as needed. Not all questions were asked in each country (noted in the exhibits). Interviewers were trained to conduct interviews using a standardized protocol. Response rates varied from 14 percent (U.K., U.S., New Zealand) to 30 percent (Sweden).

The authors thank Jen Wilson and Chris Hollander, of the Commonwealth Fund, as well as Robyn Rapoport, Sarah Glancey, and Rob Manley, of SSRS.