The costs of prescription drugs have grown at an unsustainable rate in the United States, making it hard for patients to access the drugs they need. In addition, the COVID-19 crisis and ensuing economic disruptions have constrained federal and state health care budgets and made it harder for many families to afford their prescribed drugs.

In policy discussions of how to control drug costs, much attention has focused on drug manufacturers, which set prices, and pharmacy benefit managers (PBMs), companies contracted by plan sponsors (health insurers, large employers, and other payers) to administer prescription drug benefits and negotiate with manufacturers. However, the pharmacy industry also affects the price of those drugs and the quality of pharmacy care. After manufacturers, the pharmacy industry is the second-largest sector in the pharmaceutical distribution chain, retaining $73 billion in gross profits1 in 2016.2 As of 2017, there were approximately 60,000 retail pharmacies in the United States, with one-third operating as independent pharmacies and two-thirds as part of larger chains such as CVS and Walgreens or mass retailers like Walmart (Exhibit 1).

In particular, the pharmacy sector affects the availability and pricing of generic drugs, which make up about 90 percent of dispensed prescriptions. In this issue brief, we identify policy opportunities related to the pharmaceutical market and supply chain that affect purchasing efficiency and patients’ access to prescription drugs. We also discuss the importance of preserving the option of in-person pharmacy care as a larger share of pharmacy distribution increasingly shifts to mail-order dispensing. 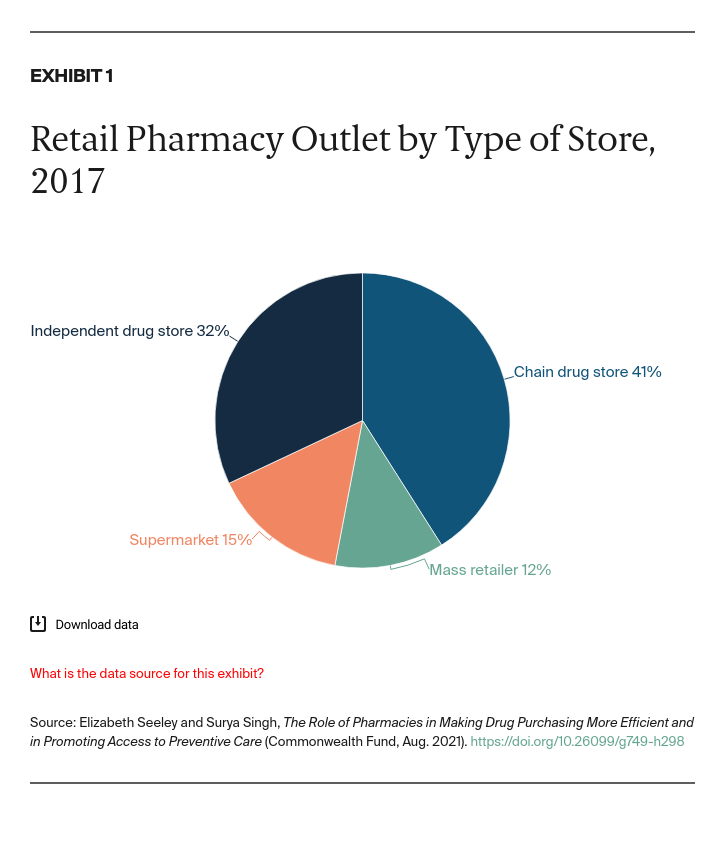 The pharmacy industry is central to the U.S. prescription drug market and increasing its efficiency could help improve patient outcomes and reduce wasteful spending. Below, we outline five issues that policymakers and payers may want to consider to improve pharmacy operations for the benefit of patients.

How Does Spread Pricing Relate to Higher Costs?

Increased market power of PBMs and greater competition among pharmacies in recent decades have resulted in lower reimbursement rates to pharmacies for generic drugs. The difference between what PBMs pay pharmacies for drugs and what PBMs charge plan sponsors is referred to as the “spread,” as depicted in Exhibit 2. PBM reimbursement to pharmacies for generic drugs is based on Maximum Allowable Cost (MAC) schedules and Generic Effectiveness Rates (GERs),3 which means that the prices of off-patent and generic drugs are often capped. This approach can help contain spending on generic drugs if the PBM passes these lower prices along to payers, which then ultimately pass them along to patients. However, PBM–plan sponsor contracts contain MAC pricing schedules and GERs separate from PBM–pharmacy contracts, which may result in plan sponsors paying more for a particular drug than the PBM paid the pharmacy. PBMs report giving plan sponsors the choice between spread pricing, in which the PBM retains the difference, or pass-through pricing, in which PBMs pass through all discounts and rebates to the plan sponsor in exchange for the plan sponsor paying the PBM administrative fees for their services.4 An employer survey showed that over 2015–2018, more than one-third chose spread-pricing models.5 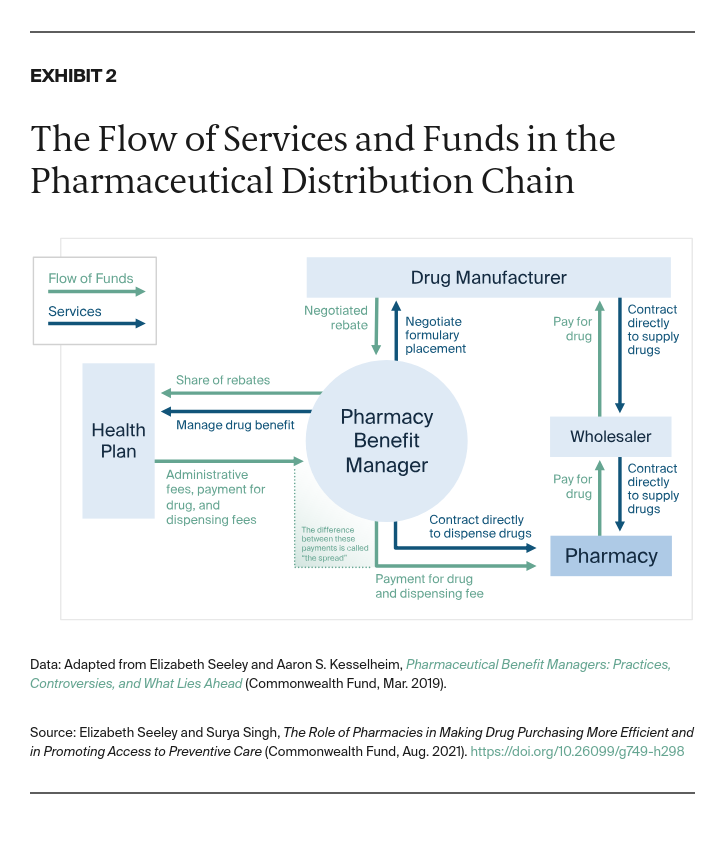 In 2018, Ohio released a report that estimated its Medicaid managed care organizations (MCOs) were losing substantial funds because of spread-pricing arrangements.6 In response, the state passed legislation requiring pass-through pricing contracts between PBMs and Medicaid MCOs. Other states, including Pennsylvania and New York, have examined the issue of spread pricing in their MCOs and its impact on reimbursement rates for generic drugs to pharmacies.

Which Distribution Channel Leads to the Lowest Costs?

Drug formularies that steer patients toward mail-order prescription drugs have been criticized because some PBMs own the mail-order pharmacies and therefore profit from the increased business. Under federal law, Medicare Part D plans are not allowed to use financial incentives such as lower copayments to drive mail-order use. By contrast, such financial incentives are allowed in the commercial market and roughly half of employers report that their plans have such incentives. This suggests that PBMs are pushing patients toward their mail-order subsidiaries. With mail-order pharmacies accounting for more than one-third of retail pharmacy sales, it is important that future research assess the full reimbursement picture to better understand the impact that this distribution channel has on pharmaceutical spending.

Lack of transparency throughout the drug distribution system is a major challenge, but new innovations can increase transparency. In November 2020, Amazon launched Amazon Pharmacy. Under this model, patients purchase their prescription medications online via an Amazon portal in which they can see the price of their medication with and without insurance.

Giving patients the ability to observe the difference between a drug’s retail list price and the insurer’s negotiated price may bring transparency to the retail pharmacy market and drive competition. The concept is similar to GoodRx, an online company that partners with PBMs to show customers the lowest-cost prescription drug option net of negotiated discounts.9 Through a partnership between Amazon and Insider Rx (a subsidiary of ExpressScripts), Amazon Prime users also may receive discounts of up to 80 percent on generic drugs and 40 percent on brand-name drugs.10 Price transparency and such discounts position Amazon to compete with mass merchant and supermarket pharmacies. It also may increase price competition in the mail-order pharmacy industry.11

Under a federal rule passed in November 2020, commercial health insurers will be required, starting in 2022, to publish pharmaceutical prices they negotiate with PBMs and drug manufacturers.12 These “allowable costs” are reflected in the PBM plan contracts through MAC schedules and GERs for generics and through specified percentage discounts off the average wholesale price for brand-name drugs. If the rule survives legal challenges, making these rates public may help plan sponsors ensure they are receiving the best prices available to other health plans and employers. Even under this rule, however, there is no transparency requirement for PBMs’ actual pharmacy reimbursement levels. If PBM–pharmacy MAC schedules, GERs, and branded drug reimbursement rates were also publicly available, plan sponsors and patients would be able to ensure they are purchasing drugs at the lowest prices across pharmacy types.

How Can We Protect Independent Pharmacies in Underserved Markets?

One such change to the reimbursement system could include discontinuing use of direct and indirect remuneration (DIR) fees for Medicare Part D beneficiaries. DIR fees are payments that pharmacies return to health plans if they do not meet specified performance goals related to adherence, gaps in care, or missing prescriptions. In a survey of independent pharmacists, 63 percent reported DIR fees as the largest challenge they face.13 DIR fees also have been criticized on the grounds that they are not credited back to Medicare beneficiaries at the point of sale, resulting in higher out-of-pocket drug costs.14 Federal and state legislation has been proposed to help pharmacists and patients by requiring greater transparency around DIR fees or eliminating them altogether.

Can Pharmacists Play an Expanded Role in Preventive and Chronic Health Care?

Another way to help independent pharmacies and increase delivery of preventive services would be to support pharmacists taking on greater roles in providing billable health care services. Pharmacies are engaging in an increasing array of services, including drug adherence programs, value-based pharmacy networks, the dispensing of specialty drugs, e-commerce platforms, and home delivery, all of which can increase medication adherence and therefore the value of drugs. (See box below for a more in-depth discussion on pharmacies’ roles in quality improvement and value-based reimbursement.)

Pharmacies are also key to our public health infrastructure. For example, as shown in Exhibit 3, most independent and major chain pharmacies provide immunizations,15 with pharmacies currently playing a vital role in the distribution of COVID-19 vaccines. More than half (57%) of independent pharmacies also monitor blood pressure. 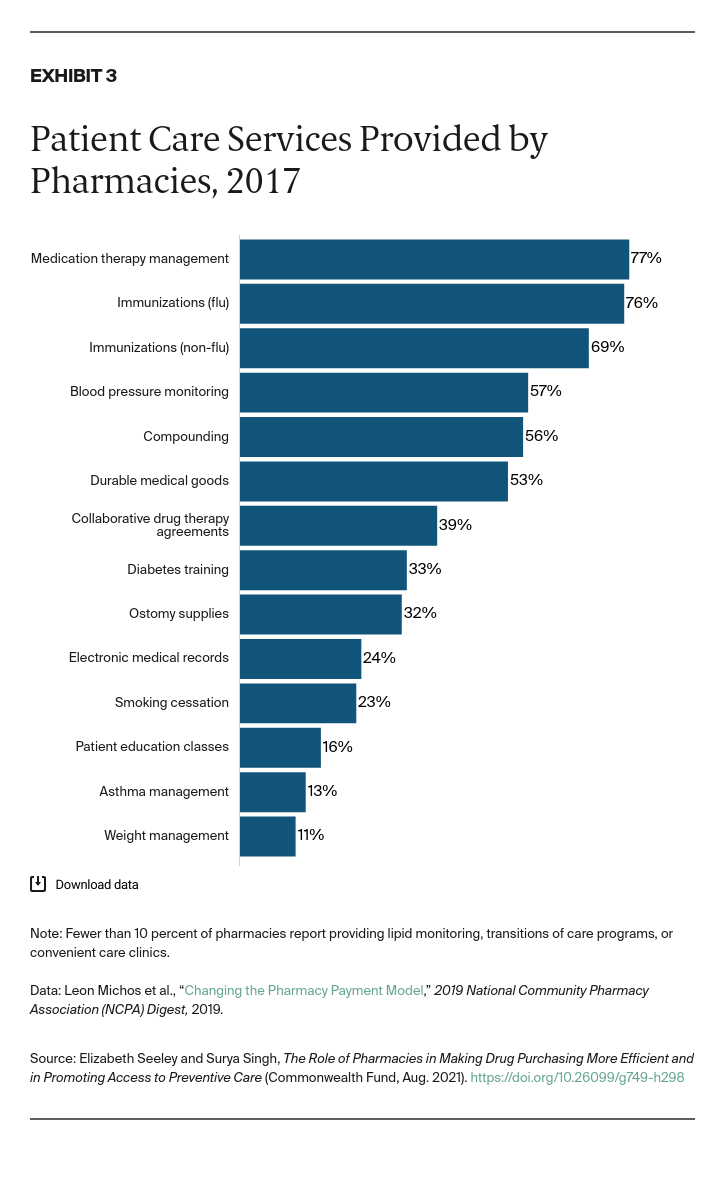 In addition to managing patients’ medications and promoting adherence, pharmacists could provide certain other health services, such as diabetes improvement programs and counseling to prevent opioid misuse and abuse (see box).

Pharmacies are finding new ways to make money and facilitate the shift to a value-based reimbursement system for prescription drugs. Engaging in quality improvement programs and value-based payment initiatives offer a chance for pharmacies to partner with other health care stakeholders in pursuit of better clinical outcomes, improved population health, and lower costs to patients and plan sponsors. The expansion in pharmacy services can enable pharmacists to maximize their training as members of the clinical care team.18

For example, quality improvement programs for diabetes care have proliferated in independent and chain pharmacies. In most instances, such programs are initiated by the member’s plan sponsor and pharmacy benefit manager, with pharmacies receiving clinical management fees based on meeting performance targets. Pharmacists may perform medication reviews to ensure drug regimens are consistent with practice guidelines, ensure formulary compliance, offer counseling on diet and exercise, and encourage patients to get needed care, such as having hemoglobin A1c levels checked at recommended intervals.19

Pharmacists also play central roles in management of opioid therapy. While the counseling services that pharmacists provide to patients receiving opioids have been long recognized as pivotal in helping prevent misuse and abuse, pharmacists were given minimal additional training, resources, or organizational support as the opioid crisis grew.20 Recently, however, some plan sponsors, including state Medicaid programs, have recognized pharmacists as frontline caregivers by reimbursing services such as counseling on opioid risks, naloxone dispensing, opioid storage and disposal, prescription drug monitoring, opioid deprescribing, and addiction treatment.21

Pharmacies also have been included in some value-based payment initiatives, though less often than other types of clinicians. Medication adherence is often used as a performance metric in accountable care organizations and patient-centered medical homes, so including pharmacies in these efforts may be key to their success. For example, Community Care of North Carolina, a multipayer health home, includes pharmacists as part of patients’ primary care teams.22 There are also programs in which community pharmacies provide comprehensive medication management to patients who are assigned to them; pharmacies are paid based on performance metrics and patient- or population-level risks.23

Across both independent and chain pharmacies, reimbursement is increasingly being linked to performance and value-based programs, with the goal of providing pharmacists with additional revenue, reducing drug spending, and improving health outcomes.

However, the current reimbursement system does not offer pharmacies adequate compensation to provide such nonpharmaceutical services. Payers could offer fees for these services, although this should not take away from an already underfunded primary care system. Instead, pharmacists could be included in value-based payment programs, which could promote coordination of care. In addition, some patients may be willing to pay for pharmacy services. In a survey by PrescribeWellness, more than 46 percent of respondents said they’d be willing to pay cash to receive additional health services at their pharmacy, including immunizations, flu or strep testing, and blood pressure checks.24

The pharmacy market is changing through consolidation, vertical integration, innovations in delivery, and expansions in the roles pharmacies play. As PBM consolidation has increased market power among payers, pharmacies face downward pressure on reimbursement levels that offers an opportunity for increased purchasing efficiency. Policymakers can ensure that these low prices are ultimately passed on to payers and patients by addressing spread pricing and by requiring transparency in PBMs’ pharmacy reimbursement. Policymakers also should ensure that formularies encourage use of pharmacy channels that offer the lowest-cost drugs, especially as mail-order and other e-commerce platforms increase their market share.

At the same time, it is important to ensure that the reimbursement system continues to support independent pharmacies. These are a key part of the retail pharmacy industry and are needed to ensure equitable access to prescription drugs and other preventive health services across the United States.

The authors would like to thank Aaron Kesselheim for his comments on this issue brief.