Not all states have yet expanded Medicaid, although the American Rescue Plan offers inducements to do so. Opponents of coverage expansions have raised concerns about supply shortages, rehashing an argument common at the time the ACA was passed.1 At that time, against the background of an already strained primary care system, several estimates suggested that the demand for additional primary care would require substantial increases in the number of providers,2 though other studies anticipated that the existing supply would be sufficient to meet the new demand.3

Similar concerns have been raised in the debate on a single-payer health plan for the United States. The Congressional Budget Office, in its cost estimates, assumes that providers would rapidly adjust supply to meet the increased demands under such a plan.4 In contrast, some analysts believe that supply increases would accommodate only a portion of the increased demand, implying that the costs of such a plan would be lower than the CBO expects.5

Another set of studies has examined the relationship between the Medicaid expansion and the quality of care provided to patients, mainly focusing on surgical care and community health centers. Most find either improvements or no effects, suggesting that these components of the health system have been able to absorb the additional demand generated.7

To date, there has been no assessment of how the quality of primary care more generally has changed since ACA implementation. We build on the existing literature to describe how the primary care experience for all adult patients under age 65 has changed as the coverage expansions have taken place.

In this analysis, we update these estimates using the 2006–2016 National Ambulatory Medical Care Survey (NAMCS), the main data source used in prior studies. (For more detail, see “How We Conducted This Study.”) Our analysis ends in 2016 because the NAMCS substantially changed its sampling frame and methods in the 2017 survey, which is not yet publicly available and will not be fully comparable to prior versions of the survey.

We examine four dimensions of quality of care:

The duration of physician visits is the most direct measure of supply constraints. If doctors are overbooked, they are likely to cut back on visit length. Primary care visit length increased substantially, to a recent high of 25 minutes, through 2013 (Exhibit 1). Immediately after implementation of the coverage expansions, visit duration fell by about 1.5 minutes, though it remained well above the 2006–2010 average. By 2016, visit duration had bounced back to about the level recorded in 2013. This pattern is consistent with the data on access to care, which found some evidence of access problems immediately after coverage expansion implementation, followed by an easing of these problems. 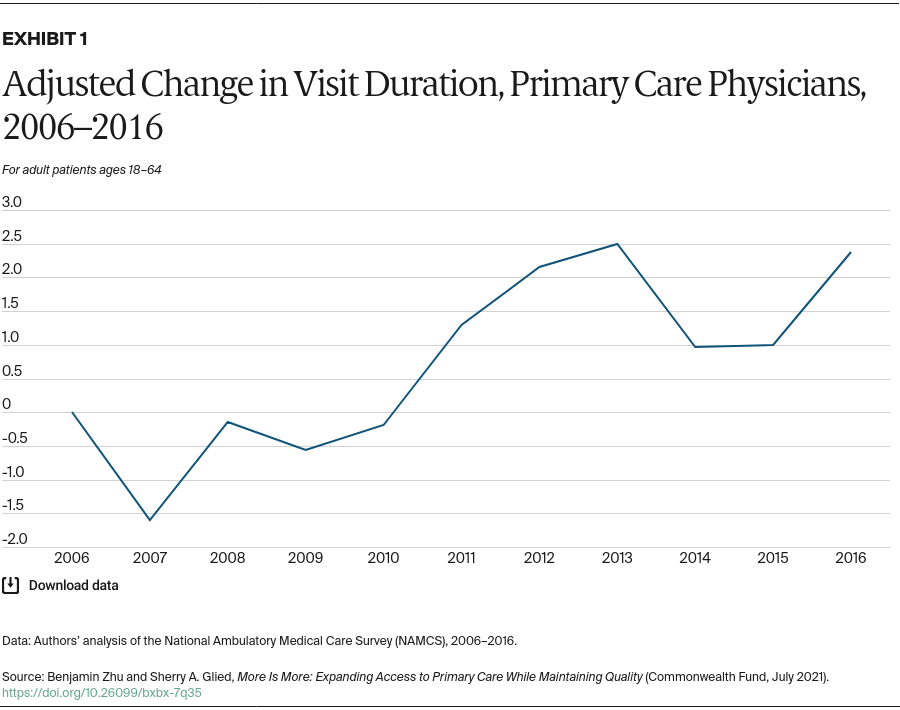 Increased access to primary care might have led providers to be more judicious in their practices, cutting back on unnecessary care. Unfortunately, this does not appear to have happened (Exhibit 2). The Choosing Wisely campaign appears to have led to reductions in unnecessary care during the immediate period of its implementation (2011–2013 compared to 2006–2010). These gains, however, appear to have reversed in the post-coverage-expansion period. Between 2014 and 2016, prescriptions of antibiotics for upper respiratory tract infections and the rate of routine EKGs and urinalyses all increased. 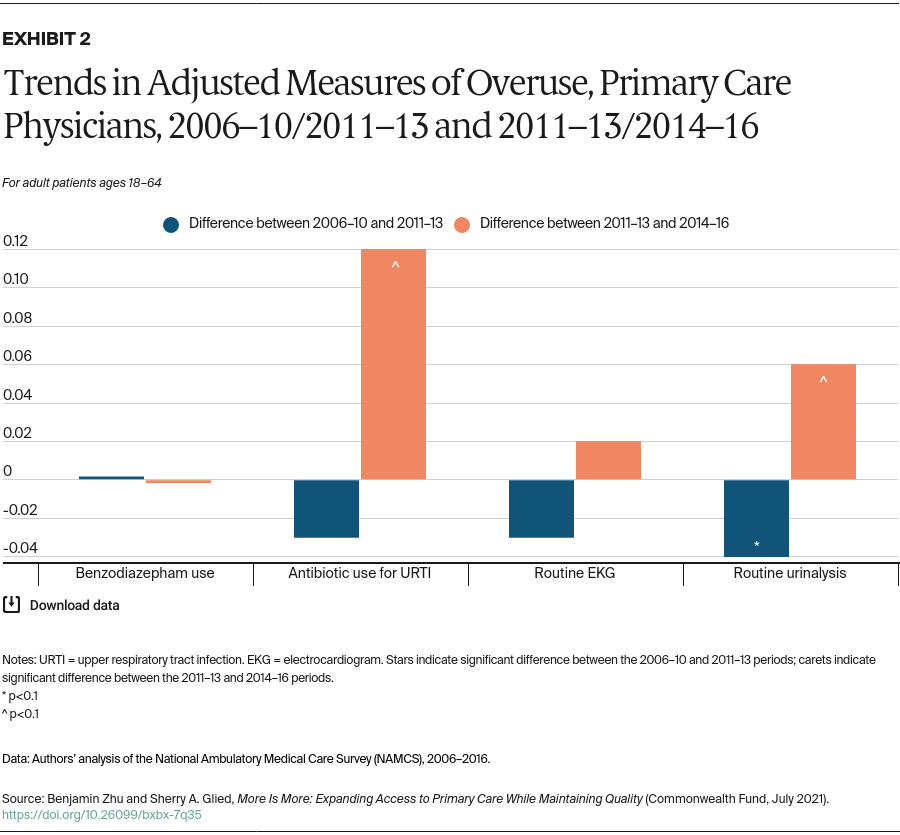 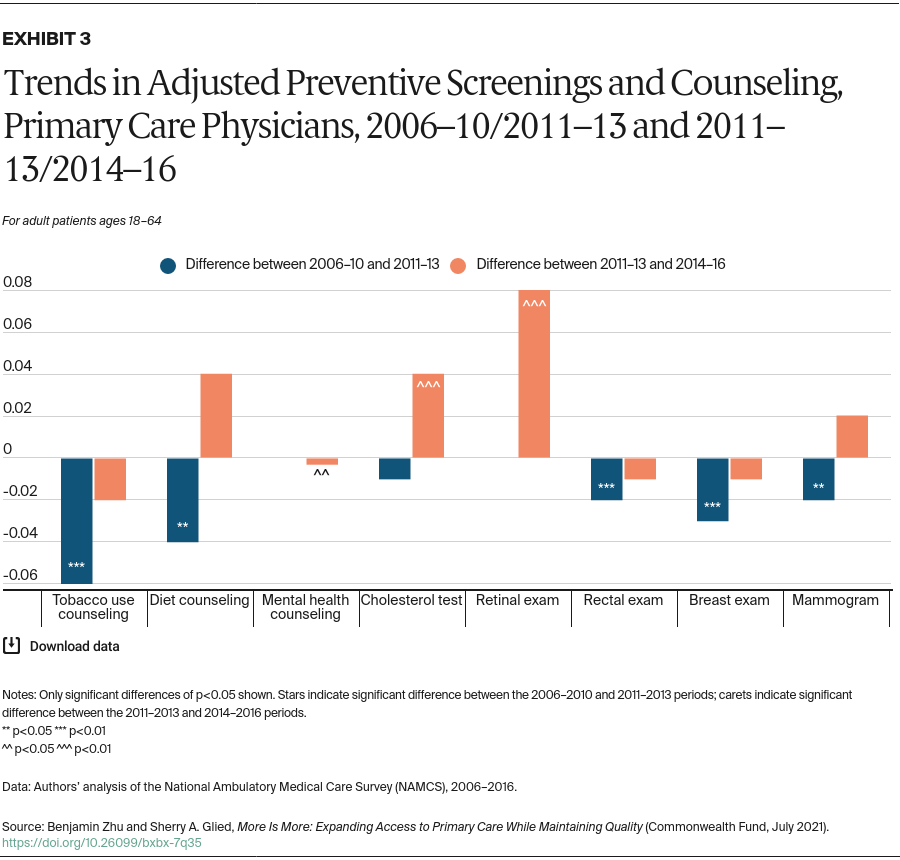 There are few statistically significant changes in the rate of guideline-concordant care across the periods we study. In general, rates of concordant care fell marginally when comparing 2011–2013 and 2006–2010 and tended to rise marginally after implementation of the coverage expansions in 2014.

The Affordable Care Act greatly expanded access to primary care, first by reducing cost sharing for preventive services in 2011 and then by expanding coverage to some 20 million Americans in 2014. This experience provides an opportunity to assess the effect of coverage expansion on the quality of primary care.

Building on a robust existing literature, we examined how office-based primary care responded to the ACA changes. We find little evidence of increased use of preventive services before 2014, consistent with prior research that found most of the effect of the cost-sharing exemptions was on spending and not access.

Across most dimensions of care, however, we find that in regression-adjusted analyses, slightly more care was delivered to the average adult patient under age 65 after the expansions than before. This includes slightly more preventive care and more guideline-concordant care, but also somewhat more unnecessary care.

Overall, these results indicate that that the primary care system has been able to absorb the increases in demand generated by the Affordable Care Act. Our finding that providers have not reduced the use of inappropriate and unnecessary services supports the view that further expansions of similar magnitude would not strain the primary care system.

We analyzed data on visits to primary care physicians from the National Ambulatory Medical Care Survey (NAMCS) from 2006–2016, excluding visits for patients younger than 18 and older than 64 and examining three periods: 2006–2010 (for comparability with Edwards et al.14), 2011–2013 (preimplementation of coverage changes, postimplementation of preventive services provisions), and 2014–2016 (post-Affordable Care Act). We used the NAMCS definition of primary care, which is based on physician specialty. We ran regression models and report coefficients for year/period, controlling for age, sex, rural, region, new patient status, major reason for visit, patient race, and insurance status.

We define the quality indicators using the definitions in Appendix Table 1, based on a review of the clinical literature and guidelines, and we restrict the regression models to the denominator population where relevant. Additionally, we exclude visits that are contraindicated according to clinical guidelines. For estimating coronary heart disease risk, we follow the risk factor counting procedure outlined by Ma et al. to create mutually exclusive low-, moderate-, and high-risk categories.15

3. Sherry Glied and Stephanie Ma, How Will the Affordable Care Act Affect the Use of Health Care Services? (Commonwealth Fund, Feb. 2015).