Kyra Betts stands for a portrait with her five-month-old son Nathan Randy Patton Jr. outside her mother’s home in St. Louis on May 20, 2021. Two-thirds of maternal and child costs due to maternal morbidity for U.S. births in 2019 occurred within the first year postpartum. Photo: Nick Schnelle for The Washington Post via Getty Images

Maternal morbidity encompasses physical and psychological conditions resulting from, or aggravated by, pregnancy. These conditions do not necessarily lead to death, but they can have a negative impact on quality of life that lasts for months, even years.

Maternal morbidities caused or aggravated by pregnancy range from short, acute episodes to longer, chronic ailments.1 The Centers for Disease Control and Prevention (CDC) has identified 21 indicators of severe maternal morbidity, ranging from blood transfusion to eclampsia, hysterectomy, and sepsis.2 Maternal morbidity conditions can lead to adverse outcomes for birthing people, such as cesarean delivery and stroke, as well as adverse outcomes for their children, such as asthma, preterm birth, and suboptimal breastfeeding.3

The toll of maternal morbidity is significant and growing (Exhibit 1). The occurrence of severe maternal morbidity in the United States rose approximately twofold between 1998 and 2014, affecting 1.4 percent of birthing people during delivery. It can increase length of hospital stays up to 70 percent.4 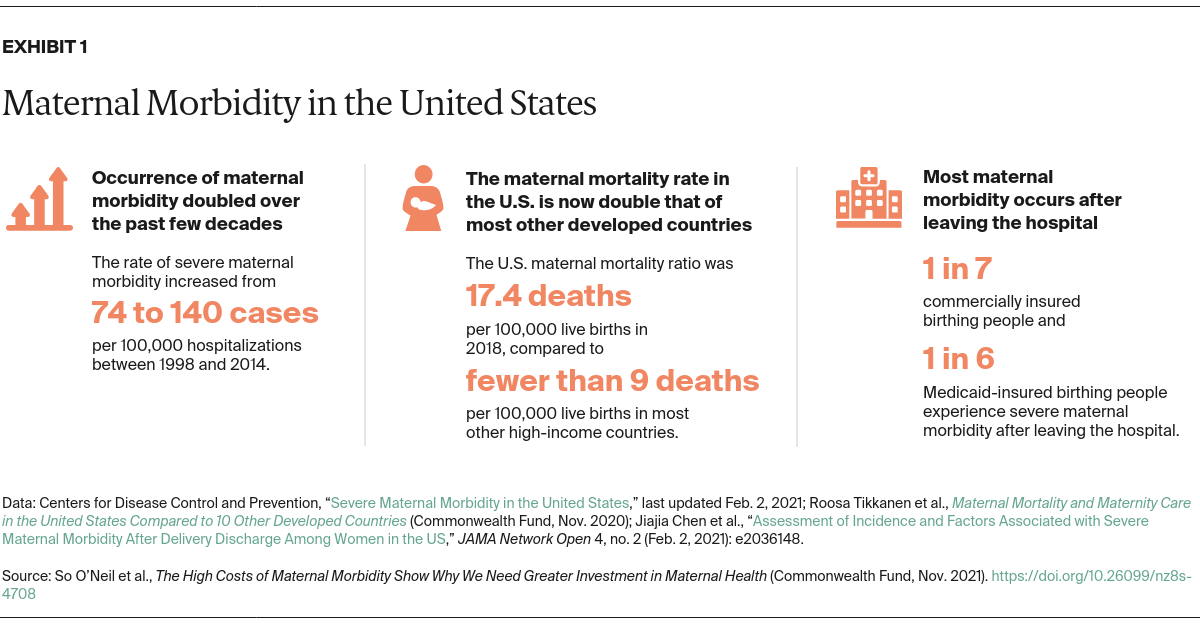 The most severe consequence of maternal morbidity is death. The U.S. has a maternal mortality ratio of 20 maternal deaths per 100,000 live births, the worst among developed countries.5 By addressing maternal morbidity through policy and systems change, we can help avert “near misses” as well as disabilities and chronic illnesses that can have ongoing, compounded effects on family members — shaping their workforce participation, nutrition, schooling, and other factors affecting quality of life.6

To develop our model, we searched peer-reviewed studies and secondary sources to collect data on: 1) the prevalence of maternal morbidity conditions; 2) the incidence of outcomes associated with these conditions; and 3) the medical and nonmedical costs associated with outcomes. We then developed cost estimates for all 2019 births in the U.S. when projecting outcomes of birthing people and their children from pregnancy through five years postdelivery. We focused on this postpartum period to estimate the costs of more immediate outcomes of maternal morbidity, understanding that the economic impact may continue well beyond a child’s fifth birthday. (For more details, see “How We Conducted This Study.”)

Exhibit 2 presents our conceptual framework for estimating the costs of maternal morbidity. Our model reflects costs related to needed medical care and other nonmedical costs. Medical costs include treatment and hospitalization costs for birthing people and their children. Nonmedical costs include productivity loss and use of social services, such as the Supplemental Nutrition Assistance Program (SNAP), Special Supplemental Nutrition Program for Women, Infants, and Children (WIC), Medicaid, and Temporary Assistance for Needy Families (TANF). The medical and nonmedical costs directly result from each maternal morbidity outcome. 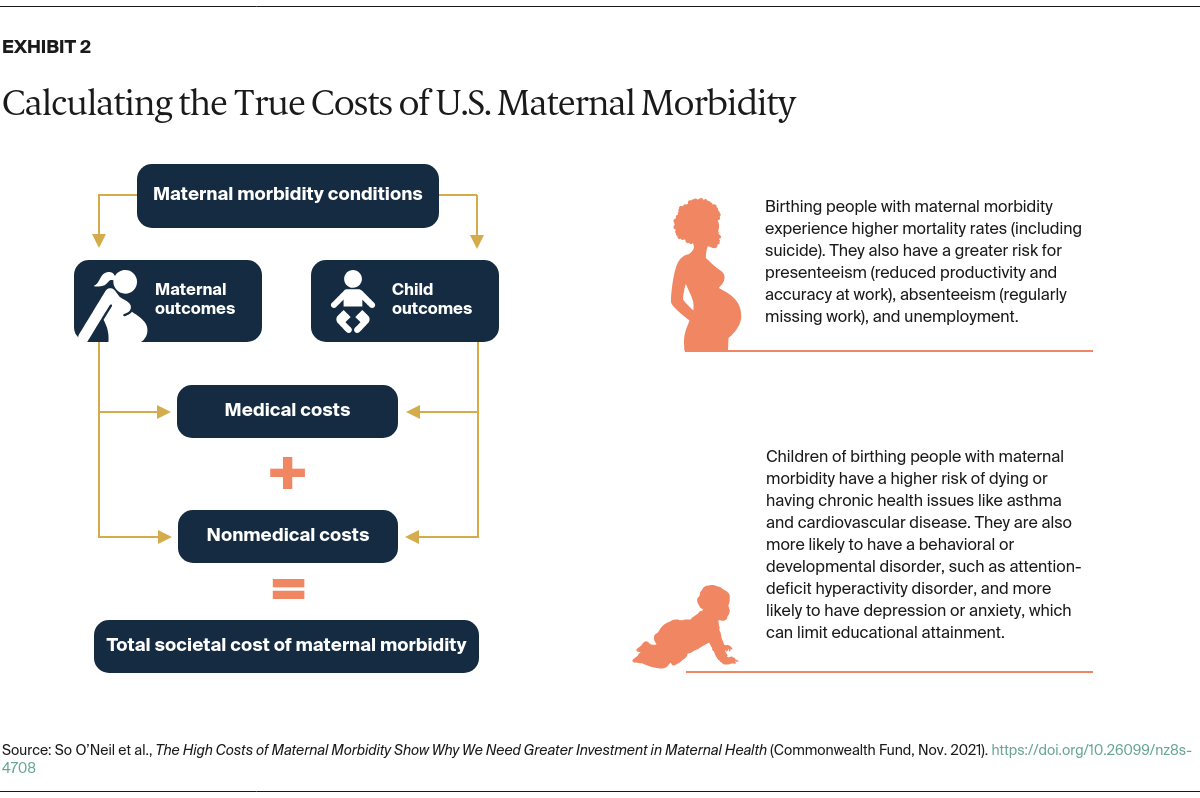 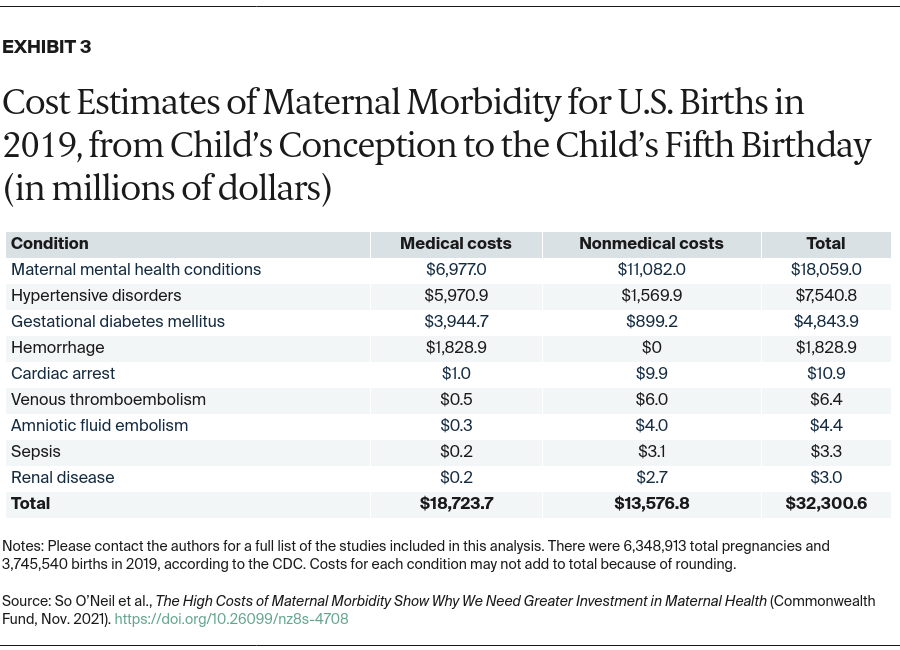 Using prevalence estimates for each condition, we estimated that the total costs of these nine maternal morbidity conditions for all U.S. births in 2019 reached $32.3 billion from conception through the child’s fifth birthday (Exhibit 4). This amounts to roughly $8,624 in additional costs to society for each maternal–child pair associated with 6.3 million pregnancies and 3.7 million births in the U.S. annually. Two-thirds of these costs occurred within the first year postpartum. 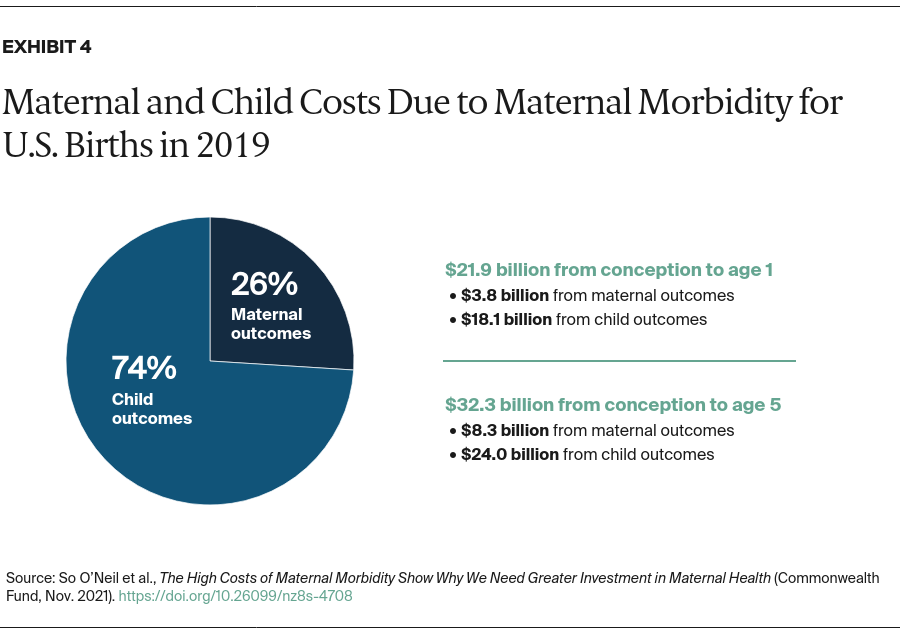 The health care system bore more than half these costs (58%), with the rest shouldered by employers, public social services programs, and other nonmedical sectors. These nonmedical costs included losses in productivity ($6.6 billion), costs associated with behavioral and developmental disorders in children ($6.5 billion), and increased use of social programs like SNAP, WIC, Medicaid, and TANF ($239 million). 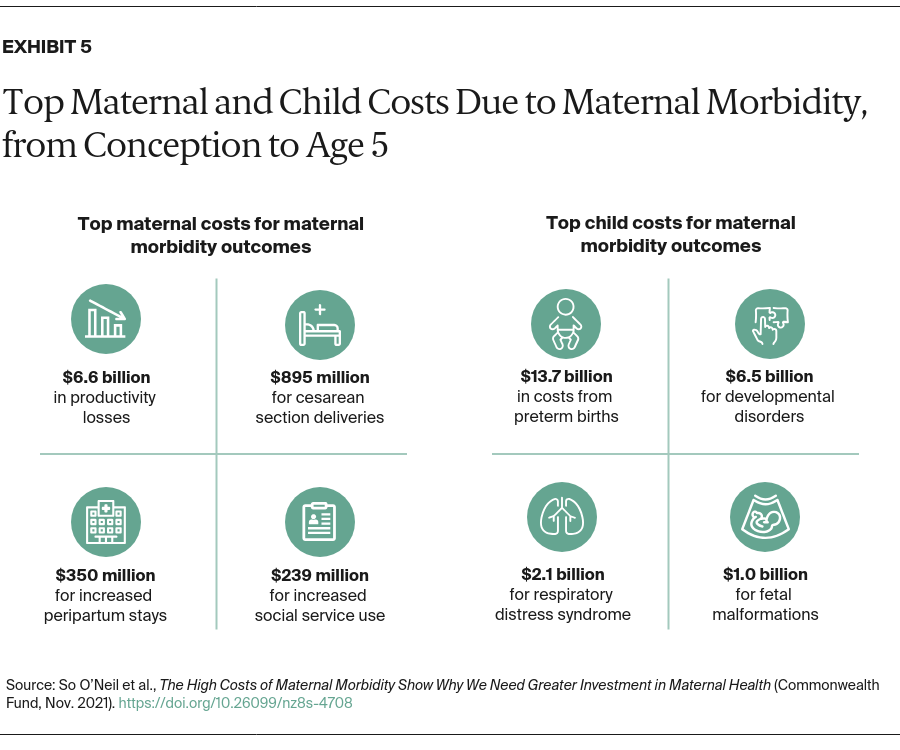 Limitations of the Study

Our model likely underestimates the true societal costs of maternal morbidity, because data on the many nonmedical costs associated with the nine conditions included in the model were lacking in the research literature. Also missing was supporting evidence for many of the morbidity–outcome connections from our original conceptual model.

In addition, to avoid duplicating cost estimates, we intentionally chose not to model secondary outcomes. For example, one of the outcomes in our model is child developmental disorders, which often require social services, such as Supplemental Security Income payments, to address. Our model did not include this set of costs.

Finally, we designed this model to focus on a six-year period (pregnancy through five years postdelivery) to measure the immediate impacts of maternal morbidity. We recognize, however, that maternal morbidity can have long-term effects on the birthing person and the child. Our estimates may therefore represent only a fraction of lifetime costs.

Our model estimated that nine common maternal morbidity conditions associated with births in a given year (2019) cost society $32.3 billion from the beginning of pregnancy through five years postpartum. The lack of comprehensive data for other conditions suggests that maternal morbidity has the potential to exact a much higher toll on society than what we have found, rivaling that of expensive chronic conditions like diabetes, whose costs run into the hundreds of billions of dollars.9

Of the costs documented, medical costs made up the majority (58%). This preponderance of medical costs is likely driven by the relative availability of hospital discharge data compared with other cost information. The focus of these costs on the delivery period also implies our estimates might further miss costs associated with later and longer-term physical and mental health consequences of maternal morbidity for birthing people and their children, including consequences for subsequent pregnancies.10 For example, our maternal mortality cost estimate ($30.8 million) included medical costs due to hospitalization and only the nonmedical costs of maternal funerals; there was no additional information in the research literature on the longer-term physical and psychological costs for other household members.

Nevertheless, our cost estimates confirm the substantial toll maternal morbidity has on society and signify further opportunities to invest in maternal health. These investments could support evidence-based maternal health initiatives, such as: midwifery models of care that extend beyond birth; comprehensive gender-specific primary health care that provides seamless transitions in and out of pregnancy; community-based models of care; and telehealth integration for maternal health.14 These initiatives could be supported through various state or federal policies, such as incentives for extended postpartum coverage or expansion of insurance coverage more broadly. Policy also can address reimbursement for measuring and addressing social determinants of health associated with maternal morbidity, such as unstable housing and lack of transportation. Such interventions must specifically address root causes of inequities in maternal health, including structural racism.

Reducing maternal morbidity requires tackling the multiple factors that can influence whether a birthing person experiences maternal morbidity. This starts with measurement to capture, beyond medical care, the social and other factors influencing maternal outcomes. National entities driving measurement, such as the National Quality Forum and CMS, are exploring equity-centered measures that could specifically focus on those related to maternal health. These measures will support the development of better policy and program decisions that comprehensively address the multitude of complex factors underlying maternal morbidity.15 Even without these measures, some states have been spurred to take a more comprehensive, team-based approach to perinatal care, such as by introducing pregnancy medical homes and group prenatal care.16 Although evidence on the effectiveness of cross-sector, place-based initiatives are scarce, these efforts represent a trend toward holistically addressing the social and clinical determinants of maternal and child health.17

Affordable, continuous health insurance coverage is one part of the equation — albeit an important one. This includes an extension of postpartum Medicaid coverage for up to one year to help ensure that key physical and mental health needs following birth are identified and met. Health systems and payers can further address maternal health outcomes by increasingly monitoring maternal morbidity measures and undertaking root-cause analyses to address any inequities or adverse outcomes and to drive improvement. The growing recognition of the serious effects of maternal morbidity on families and society provides an opportunity to further invest in measurement to promote evidence-informed policy change and programming for maternal health.

Our model focused on maternal and child outcomes linked to maternal morbidity conditions in the literature. We initially identified 8,337 articles in our literature review and analyzed 449 articles that passed title and abstract screening. After our review, which included rigorous selection criteria that controlled for confounding factors, we selected 224 articles for a deeper full-text review. Through our review, we identified 111 studies that supported connections between nine maternal morbidity conditions and 24 maternal and child outcomes. With expert guidance, we retained certain morbidity-outcome connections and removed others.

To calculate the aggregate excess costs of outcomes associated with maternal morbidity, we multiplied the individual incremental risk of each outcome with the expected number of birthing persons with each maternal morbidity condition. We then multiplied the product by the incremental unit cost. Through the literature and additional assumptions, we determined whether each outcome would incur one-time or ongoing costs to extrapolate the costs to the six-year period. For example, a cesarean section would incur a one-time medical cost, while the cost of child developmental disorders continues through the child’s fifth birthday and beyond. We then calculated the economic burden of maternal morbidity by adding the costs across all outcomes and years. 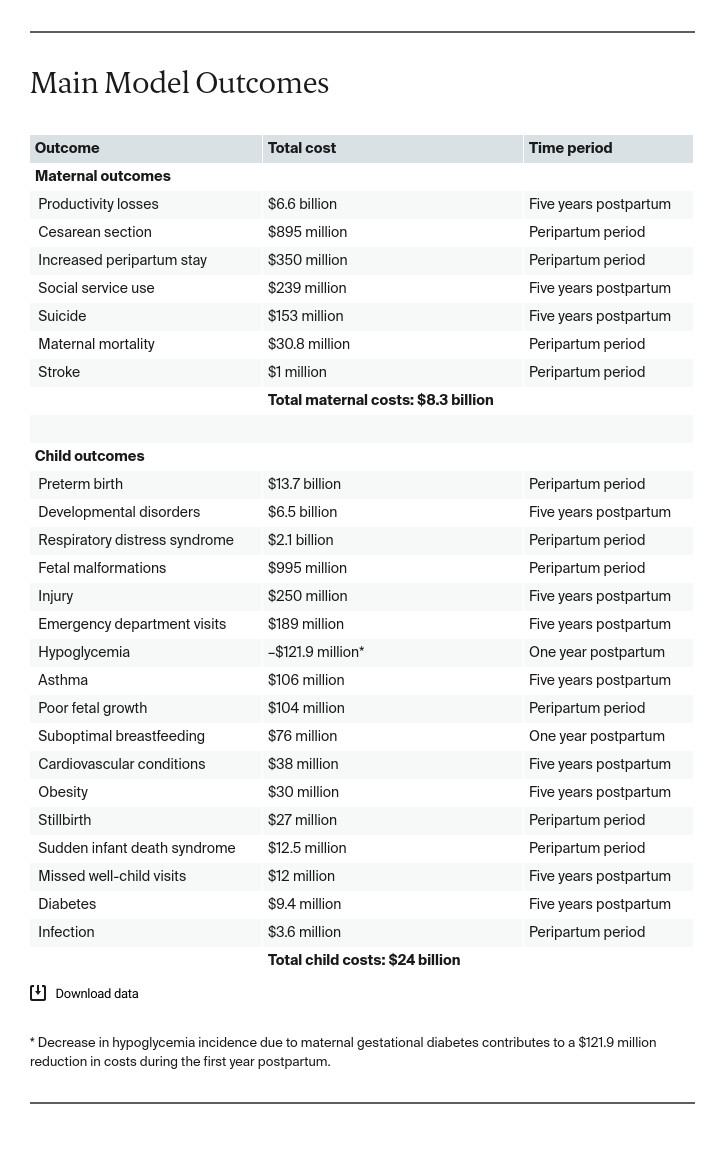 We would like to thank Jodie Katon and Kay Johnson for their expert guidance in refining our conceptual model. We would also like to thank Caroline Margiotta and Jessica Gao for their support early in the project conducting the literature review, and Erin Lipman for her support in developing the initial Excel model. Finally, we thank all the researchers and practitioners for conducting and publishing the studies used in our review.