Disparities in the Use of New Diabetes Medications: Widening Treatment Inequality by Race and Insurance Coverage

Diabetes educator Angela Serafina instructs people that administer insulin to patients in jobs such as in nursing homes and assisted living facilities on Oct. 12, 2017. Newer diabetes medications are highly effective and have fewer side effects — but they are less accessible to Black and Latinx patients and those without private insurance. Photo: Susan L. Angstadt/MediaNews Group/Reading Eagle via Getty Images

Substantial and persistent disparities in health outcomes exist among people with diabetes by race, ethnicity, income, occupation, and other measures of socioeconomic status.1 These disparities are of particular concern because diabetes is one of the most common chronic conditions in the United States, affecting 13.4 percent of the adult population.2

Most research on disparities in diabetes has focused on the impact of underlying social determinants of health, such as food and housing, which affect the incidence of diabetes.3 But income, race, ethnicity, and other measures of socioeconomic status also affect outcomes among those who have been diagnosed with the condition. These outcome disparities may arise, in part, because of differences in access to effective diabetes treatment. Studies focused on access to effective diabetes treatments have demonstrated that provider- and organization-level interventions can generate outcome improvements through consistent follow-up, better communication with patients (including through community health workers), care coordination, and similar practices.4

The challenge of reducing disparities is, however, ongoing and dynamic. The introduction of new technologies and treatments is often linked to increasing disparities.5 Therefore, innovations in diabetes treatment, including the introduction of new pharmaceutical therapies that offer better or easier glycemic control or reduce the sequelae of diabetes, could exacerbate inequalities. The association between new treatments and disparities can arise because of a lack of financial access to new, more costly therapies.6 However, disparities in the use of new treatments, particularly by education status, are also found in countries with few financial barriers to access.7

Between the discovery of insulin in the early 1920s and the mid-1990s, there were few advances in pharmacological treatment of diabetes. In the past 25 years, however, nine new drug classes for diabetes treatment have been introduced.8 Three of these classes, introduced since 2005, demonstrate high efficacy and fewer side effects, particularly for type 2 diabetes:9 glucagon-like peptide-1 receptor agonists (GLP-1 RA); dipeptidyl peptidase 4 inhibitors (DPP4-i); and sodium-glucose cotransporter-2 inhibitors (SGLT2-i).

These drugs remain on patent and have high retail prices.10 In addition, drug companies now offer new combinations of agents in fixed doses; these formulations make adherence to therapy easier.11 Use of these new drugs has increased rapidly since their approval by the U.S. Food and Drug Administration (FDA).12 However, prior research has shown racial and ethnic disparities in the use of these drugs, after controlling for people’s income and health insurance.13Appendix Exhibit 1 describes overall trends in the use of drugs for diabetes control.

Recent policy action around diabetes care has focused on the cost of insulin. In this issue brief, we turn attention to three new classes of drugs used in the care of people with diabetes. Using 2003–2019 data from the Medical Expenditure Panel Survey (MEPS), we examine whether treatment disparities are widening contemporaneously with the introduction of new diabetes medications. (See “How We Conducted This Study” for further detail.)

The term Latinx/Hispanic is used in this issue brief. In the Medical Panel Expenditure Survey (MEPS), respondents are asked whether they describe themselves as being of Hispanic ethnicity.

Between the periods 2003–2006 and 2017–2019, the adjusted average use rate of the three new medication classes (GLP-1 RA, DPP4-i, and SGLT2-i) we examined increased from 2 percent to 22 percent among adults with diabetes. Over time, however, disparities by race, education, income, and insurance in the use of these diabetes medications have emerged. By 2010–2013, Black adults with diabetes were about 4 percentage points less likely than white adults to use these new medications, a disparity of 27 percent (controlling for trends by household income, insurance coverage, and educational status, as well as other covariates). The magnitude of the disparity remained roughly constant through 2017–2019. Latinx/Hispanic adults with diabetes had use rates midway between white and Black patients. 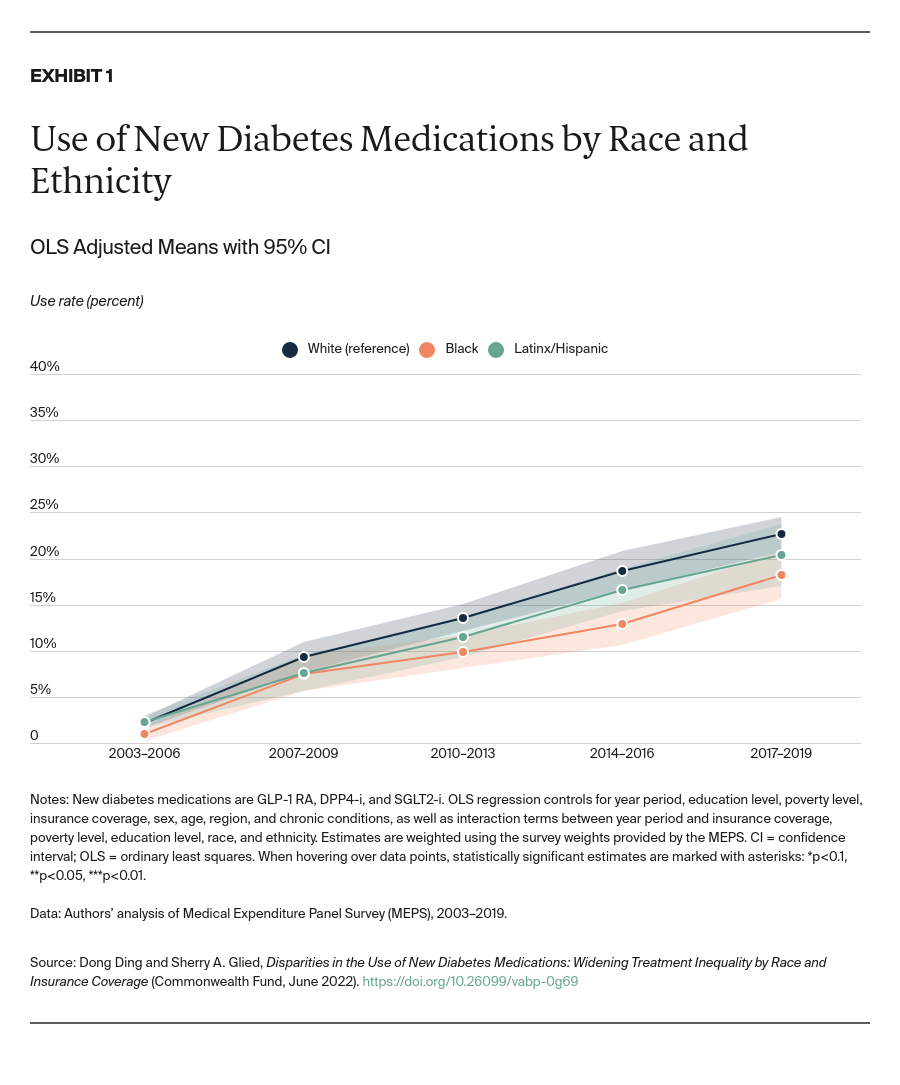 Patients enrolled in private group insurance are much more likely to use one of three new medications to treat diabetes than others (controlling for trends by race, ethnicity, income, education, and other covariates). The gap in use by insurance coverage type emerged almost immediately after the drugs were introduced and continues through today (Exhibit 2). Uninsured patients and those who hold traditional Medicare without any supplemental coverage have the lowest rates of use. Patients with Medicaid or Medicare plus other coverage (traditional Medicare with supplemental coverage, Medicare Advantage, or Medicaid) have rates of use midway between the uninsured and those with private coverage. 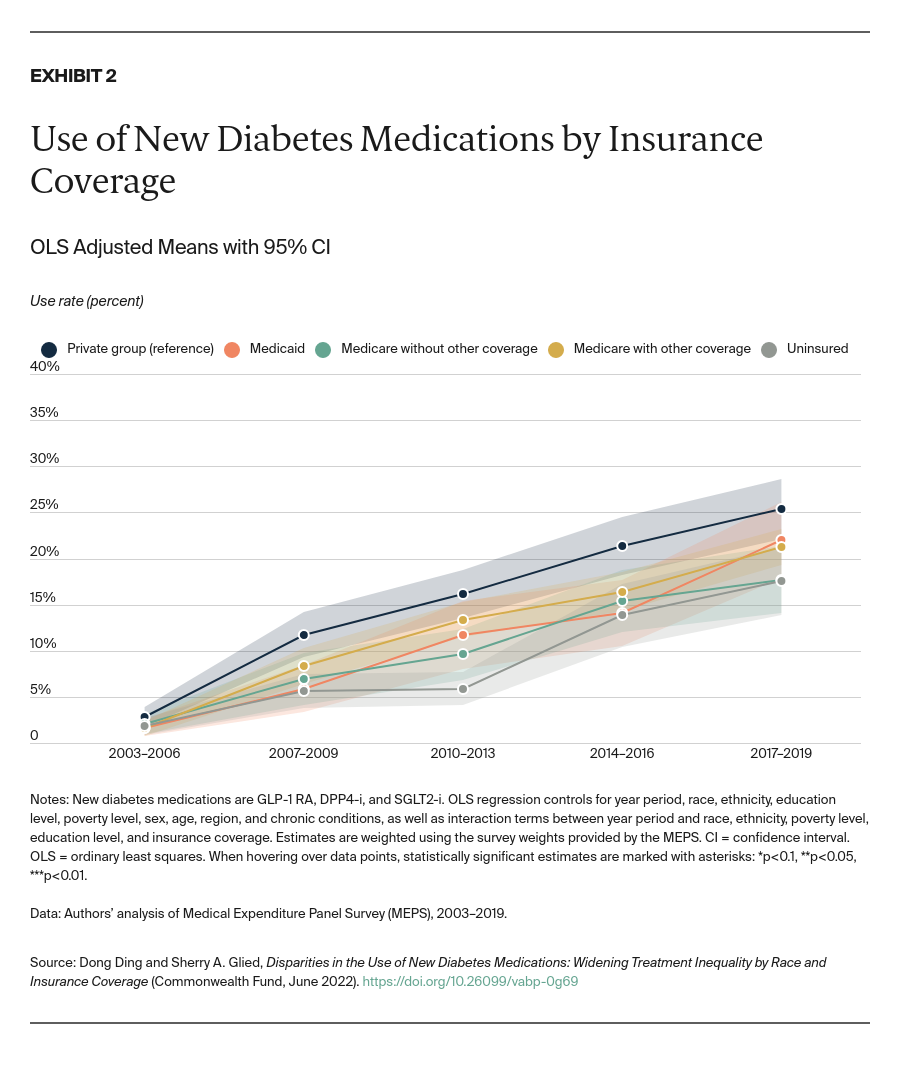 Individuals with a bachelor’s degree or higher are more likely to initiate new diabetes medications to control their glucose levels than others (Appendix Exhibit 2). However, by 2017–2019, these differences were relatively small (controlling for trends by race, ethnicity, income, insurance, and other covariates), suggesting that financial access, rather than care-seeking behavior, is the more important determinant of outcomes.

We find relatively little evidence that income itself has an impact on rates of new medication utilization, either initially or over time (controlling for trends by race, ethnicity, insurance, education, and other covariates) (Appendix Exhibit 2). Differences in rates of use by income are quite small and not always statistically significant. In general, however, households with incomes between 125 percent and 199 percent of the federal poverty level — just above the Medicaid cutoff under the Affordable Care Act — have lower use rates of new medications than those in lower and higher income groups.

Total spending on diabetes medications has always been lower for uninsured people than for people with coverage, but this disparity widened substantially over time. By 2017–2019, uninsured people with diabetes were spending about 40 percent less per year on diabetes medications than those with private insurance coverage or with Medicare plus supplemental insurance coverage (controlling for trends by race, income, education, and other covariates).

Part of the reason for this widening disparity between the uninsured and insured may be that those people with diabetes most in need of costly medications were more likely to seek out newly available coverage under the Affordable Care Act, leaving an uninsured population that was relatively less ill. However, disparities among people with different types of coverage also grew over this period. By 2017–2019, spending among those with Medicaid or Medicare without additional coverage was only about three-quarters as high as among those with private coverage (Exhibit 3). 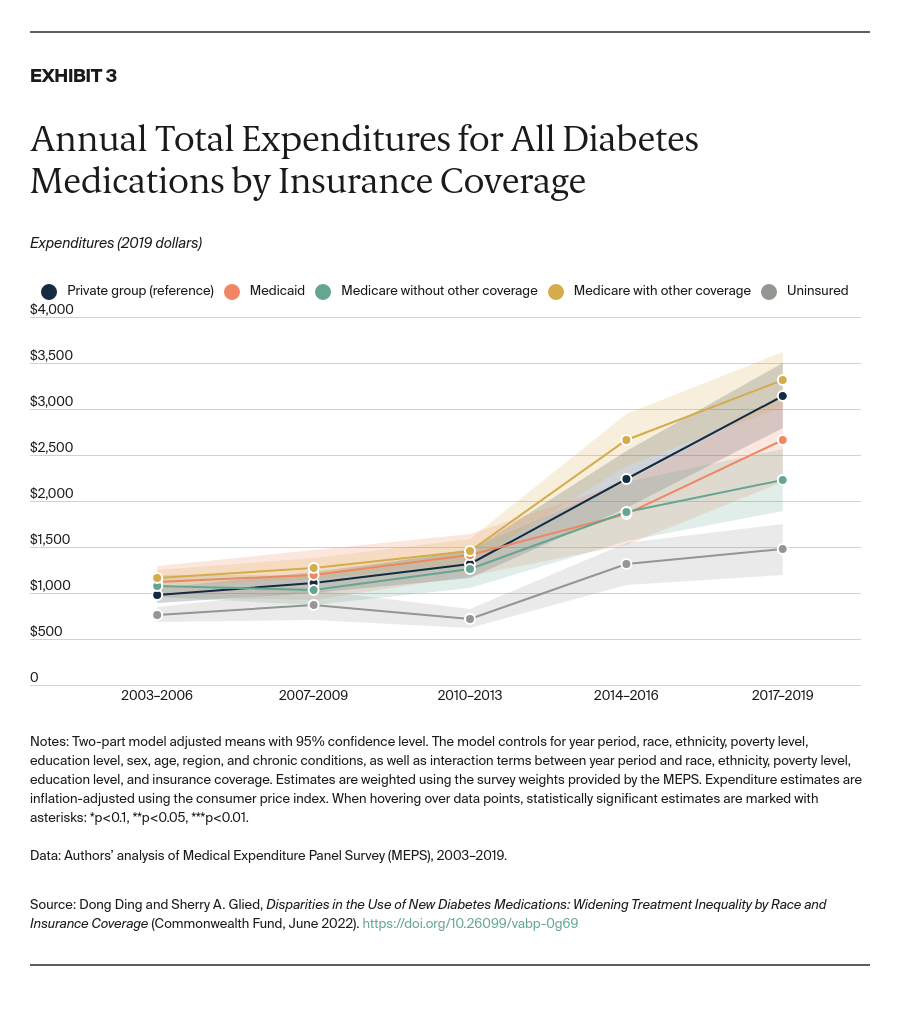 Disparities by race also grew over time (controlling for trends by income, insurance, education, and other covariates). By 2017–2019, total spending on diabetes medications was about $500 to $700 more per year for white Americans with diabetes than for their Latinx/Hispanic or Black counterparts, a disparity of 16 percent to 22 percent (Exhibit 4). 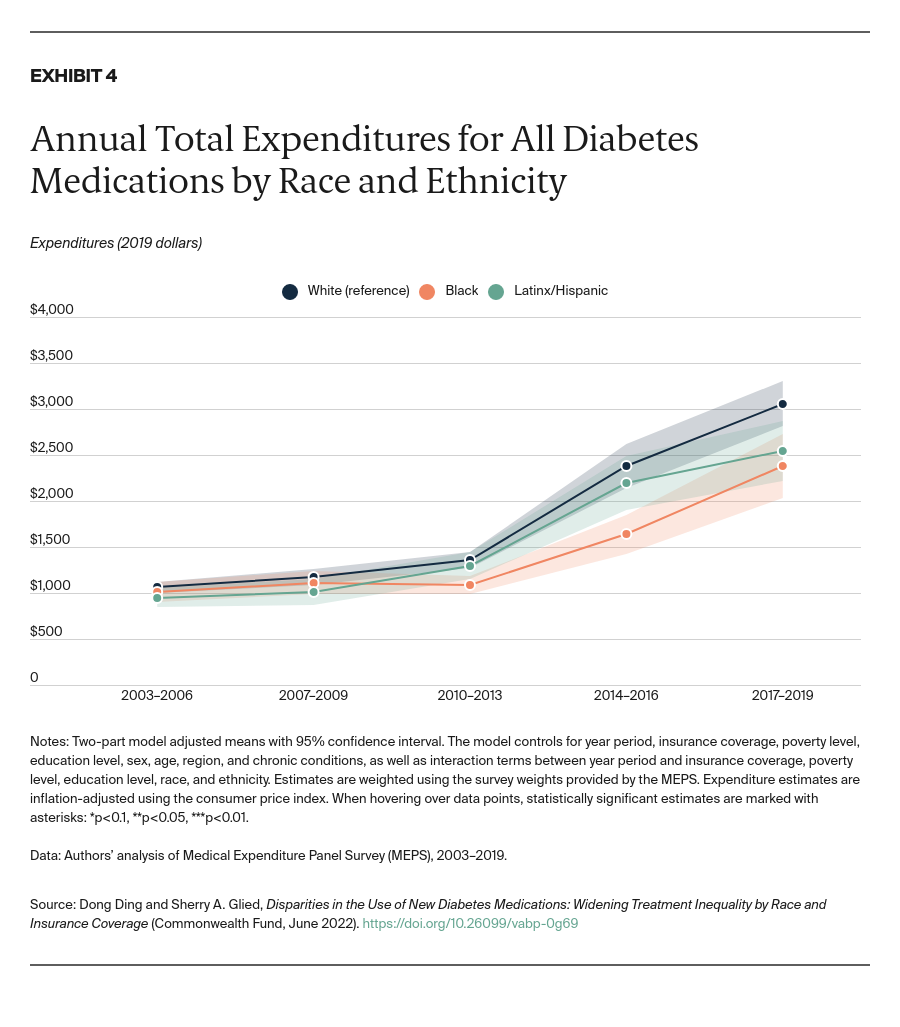 Disparities in Spending on Insulin and New Diabetes Medications

An important source of these growing disparities in spending was the increases in insulin prices. Prior research has shown that the retail price of insulin rose rapidly between 2010 and 2016.14 We find that, among people using insulin, total spending nearly doubled ($724 vs. $1,347), even though the number of users remained constant (28% of the population). The observed pattern of disparities in insulin spending emerged in this period as spending per user increased.

However, between 2016 and 2019, disparities in insulin expenditures — by race, ethnicity, insurance, education, and income — remained relatively constant. Instead, the increased disparities seen in overall spending on diabetes medications were the result of growing differences in spending on new drugs, such as GLP-1 RA, DPP4-i, and SGLT2-i. While total spending on these medications was well below spending on insulin (in part because relatively few people were taking them), the difference in average expenditures among groups widened considerably since 2014.

Trends in annual expenditures on new medications by race also diverged over time (controlling for income, insurance, education, gender, and other covariates). The difference in spending between Black and white Americans increased from $211 in 2014–2016 to $351 in 2017–2019, a disparity of 30 percent. Spending on new medications is also lower for Latinx/Hispanic patients than for white patients, with a 16 percent disparity by 2017–2019 (Appendix Exhibit 5).

Our research suggests that there are growing differences in access to new diabetes medications across patient populations. One key difference is by insurance coverage. The first important step to reducing disparities in access to novel pharmaceuticals is ensuring that all people with diabetes hold comprehensive coverage that includes these therapies.

But insurance coverage is not enough. We observe persistent and widening disparities in use of new diabetes medications by race and ethnicity, after adjusting for trends by income, education, and insurance. More actions will be needed to address the barriers that Black and Latinx/Hispanic patients face, potentially including direct outreach to physicians.

We analyzed utilization trends and expenditure patterns of diabetes medications among adults age 18 and older with diabetes using Medical Expenditure Panel Survey (MEPS) data from 2003 to 2019. The MEPS is a nationally representative survey of the U.S. civilian noninstitutionalized population.15 We used the full-year consolidated data files, which provide participants’ demographic and socioeconomic information, medical conditions, health status, and health insurance coverage to identify individuals who are age 18 and older (at the time of the survey implementation) with diabetes. Diabetes diagnosis information was self-reported by participants in the full-year consolidated data files.

The prescription medicines files in the MEPS provide purchasing-level information on medications’ brand/generic names, number and quantity of refills, and payments for each purchase. We referred to the diabetes medicines list published by the FDA16 to distinguish medication names in the data and categorized them into insulin, metformin, sulfonylureas, thiazolidinedione, GLP-1 RA, DPP4-i, SGLT2-i, and others (including alpha-glucosidase inhibitors, meglitinides, amylin agonist, colesevelam, bromocriptine, as well as unidentified antidiabetic agents and antidiabetic combinations). Combinations of agents were captured in multiple categories based on their effective ingredients. We generated indicators to identify diabetes medications that participants used and calculated expenditures on different diabetes medications in a given calendar year.

The key independent variables in this study are:

Unadjusted average use rates of medications were weighted at the population level to examine utilization trends over 17 years (Appendix Exhibit 1). We used ordinary least squares regression to estimate use rates of new diabetes medications across different groups over five periods:

A two-part model with a probit model in the first part and a generalized linear model with gamma distribution with log link in the second part was developed to estimate individual-level annual total expenditures on new diabetes medications, other medications (noninsulin or insulin), and all diabetes medications. Sampling weights and strata were implemented to generate nationally representative estimates. All estimates controlled for the covariates detailed above, interaction terms between year periods, and key independent variables (race, insurance coverage, education level, poverty level). Sampling weights, strata, and primary sampling unit were applied to generate nationally representative estimates and standard errors for the weighted estimates.17 All statistical analyses were conducted using Stata/MP, version 17.0 (StataCorp LLC).

Dong Ding and Sherry A. Glied, Disparities in the Use of New Diabetes Medications: Widening Treatment Inequality by Race and Insurance Coverage (Commonwealth Fund, June 2022). https://doi.org/10.26099/vabp-0g69

The Loss of Abortion Rights Will Send Shockwaves Through the U.S. Health Care System

Insights, Impacts, and an Invitation from The Dose