A pedestrian walks past a hospital emergency room entrance in New York on Dec. 13, 2021. When a hospital demands an in-network rate increase, health plans must compare the cost of agreeing to it versus canceling the hospital’s contract and paying much higher prices for members to use the hospital on an out-of-network basis — principally through the emergency room. Photo: Wang Ying/Xinhua via Getty Images

Given the extremely high and rapidly rising hospital prices that commercial insurers pay in the United States, prominent health policy experts are now calling for some form of hospital price regulation.1 In particular, a recent proposal to regulate provider prices called for the establishment of price caps (regulated upper dollar limits) on the highest commercial prices along with direct government regulation of provider rate increases.2

Although such a rate regulatory approach has the potential to constrain hospital price growth, a lower-intensity regulatory strategy also can achieve this goal. Capping prices of out-of-network hospital services only, with gradual reductions to those cap levels over time, may also reduce in-network negotiated rates. Hospitals — stand-alone facilities as well as hospitals within health systems — have long exercised their ability to demand large in-network rate increases by threatening to terminate their health plan contracts. Most hospitals use this negotiating strategy to retain their in-network status at high prices. This issue brief discusses a way to reverse the out-of-network negotiating leverage that hospitals currently have.

The U.S. has not had a functionally competitive, efficient private health care market for many decades. Its dysfunction has been greatly exacerbated over the past 20 years by two interrelated factors. The first is the consolidation of hospitals into health systems, likely stimulated by the dominance of managed care in the 1980s and 1990s. Since the early 2000s, this consolidation has allowed hospitals to use their market dominance to extract large rate increases from private payers.

The second factor is the bargaining power of large health systems to set inflated charges for out-of-network care. Many hospitals back up their demands for high in-network rate increases with threats of canceling their existing contracts, which would force the plans to pay high out-of-network charges — often more than 500 percent of Medicare payments.3 This circumstance, which some researchers have referred to as hospitals’ “dynamic negotiating leverage,” is one of most debilitating instances of market failure in U.S. health care.4

When faced with a hospital’s demands for outlandish in-network rate increases, health plans must compare the financial cost of agreeing to the increase versus canceling the hospital contract and paying much higher prices (approximating the hospital’s posted charges) for care to members who use the hospital on an out-of-network basis — principally through the facility’s emergency room. If a substantial proportion of a plan’s members continue to use this hospital, a plan may be reluctant to deny the hospital’s in-network rate demand, because doing so could result in increased total plan costs and a diminished network.5 An example of the negotiating dilemma that plans face in their negotiations over in-network rates is shown in Exhibit 1.

A hypothetical health plan currently pays its contracted hospitals 250 percent of Medicare rates. Hospital A suddenly demands an immediate 10 percent increase to its in-network rates with no demonstrated need or justification. The hospital’s posted charges (and the amounts it requires out-of-network insurers to pay for care to the insurer’s members) equals 450 percent of Medicare.

If the hospital goes without a contract, 30 percent of plan members will continue to use this facility, primarily on an emergency basis. The plan can divert the remaining 70 percent of members, previously using the hospital, to other in-network hospitals at the original contracted rate of 250 percent of Medicare.

Scenario 2: Hospital cancels its contract with the health plan, and the plan pays the hospital billed charges for members continuing to use the hospital. 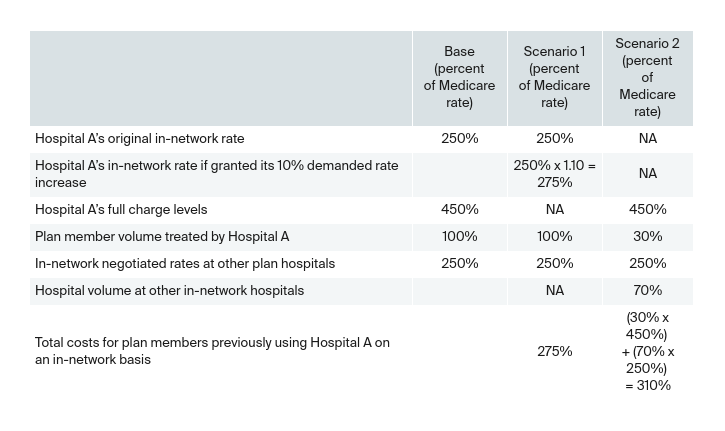 Given these circumstances, the health plan concludes it would be more cost-effective to grant Hospital A its demanded 10 percent in-network rate increase (Scenario 1). That is because the alternative scenario, letting the hospital go out-of-network, would result in the plan paying 310 percent of Medicare for patients who previously used this hospital.

Based on the assumptions used in this example, Hospital A could theoretically demand an in-network negotiated rate increase as high as 24 percent — from 250 percent to 310 percent of Medicare — before it would make economic sense for the plan to refuse the hospital’s rate request and terminate the contract. This potential in-network negotiated rate increase is a marker of Hospital A’s dynamic negotiating leverage over the plan.

The imposition of out-of-network price caps can counteract the dynamic illustrated in Exhibit 1 and increase health plans’ leverage in two ways. First, with prices regulated, hospitals are less motivated to remain out of network, giving insurers additional negotiating leverage that could result in lower in-network rates.

These indirect impacts of out-of-network caps on in-network negotiated rates seem to occur in the private Medicare Advantage market. Thanks to a federal prohibition on the balance-billing of patients and a statutory requirement that out-of-network providers be paid at traditional Medicare (fee-for-service) price levels, Advantage plans have been able to negotiate in-network rates at or very close to traditional Medicare rates.7 Other studies indicate that states with caps on out-of-network billing, established through comprehensive legislation to combat surprise billing, have experienced drops in in-network negotiated prices.8

A system of gradually reduced out-of-network price caps also would allow a state to monitor any associated impacts on patient access, quality of care, and provider financial condition. States may also be attracted to this approach because, from a regulatory standpoint, it is the least intrusive with regard to negotiations between providers and insurers (regulated price caps would apply to out-of-network care only, a small segment of the market).

Potential Impact of the Federal No Surprises Act

Passage of the federal No Surprises Act, along with the development of an interim final rule outlining the process for determining how much a patient’s health plan will pay an out-of-network provider, will have implications for a plan’s in-network negotiated rate levels. The interim rule’s use of plans’ in-network negotiated median rates for a given region as the payment standard is expected to cause the following:

Although there are concerns about providers complying with the new limits imposed on surprise bills, the No Surprises Act may produce limited overall reductions in each plan’s in-network negotiated median rate levels (and slower growth over time). Still, the law will tend to bake in what are already extremely high negotiated rate levels, particularly in regions with the highest concentration of providers. In contrast, a strategy of continuously declining out-of-network cap levels has the potential to gradually lower in-network negotiated rate levels over time.

If the Medicare Advantage experience is any guide, the presence of caps on out-of-network prices may allow insurers to negotiate in-network rates at or near the level of the out-of-network caps. And as noted, a system of gradually reduced price caps could potentially allow plans to insist on decreases to in-network rate levels if a state reduces cap levels below previously negotiated rates.

A 2020 RAND study showed that establishing an out-of-network cap at 200 percent of Medicare payment could potentially realize $81 billion in spillover savings on in-network negotiated hospital rates (7% of total commercial spending).11 Similar analyses could be performed by states to determine the most appropriate level for the initial establishment of out-of-network caps and a schedule of potential future reductions to out-of-network cap levels. States could establish caps statewide or within various homogeneous regions, starting at levels slightly above current in-network negotiated rates, and then gradually lower caps. This gradual implementation approach would enable states to monitor impact on hospital profitability, patient access, and patient quality of care.

Some have argued that the use of rate regulatory strategies to limit health care prices may result in debilitating reductions in hospitals’ profitability, which could impact their ability to provide high-quality care.12 However, research on hospitals facing rate pressure in rate regulatory systems, such as in Maryland’s unique all-payer hospital rate-setting system, shows that hospitals respond by improving their operating efficiency to achieve desired levels of profitability without compromising quality.13 Moreover, many nonprofit health systems, aided by market power to dictate prices, have amassed large surpluses in the form of cash and investments and have ample resources to invest in quality improvement if they find competitive reasons to do so.14

What Benchmark Should Be Used?

Potential benchmark standards to use when establishing out-of-network caps include either a multiple of Medicare prices (for example, 200%) or health plans’ in-network median rates. There are several advantages and disadvantages to each of these approaches (see Appendix). While some have raised concerns about the use of Medicare prices as benchmarks for commercial payment models, commercially negotiated in-network rates appear to vary widely.15 This variation raises grave doubts about the viability of using of these negotiated rate medians as benchmarks for any rate regulatory model applied to the private sector.

What Regulatory Authority Is Required to Implement a System of Out-of-Network Caps?

Relative to other pricing models, setting caps on out-of-network prices would not require the development of an elaborate administrative apparatus to implement, enforce, and oversee the program. These caps would apply only to a small subset of hospital prices and only indirectly affect in-network negotiated rates. This system could be implemented by a state law that makes it illegal for a hospital to charge, or a payer to pay more than, the regional out-of-network cap. Hospital CEOs and plan administrators would be required to certify they were complying with these limitations under penalty of perjury and potential civil monetary penalties. Consumers and state watchdog organizations would be motivated to report instances of noncompliance, making this approach administratively simple to implement.

Moreover, a legislated system of gradually reduced out-of-network price caps also can enable states to monitor the impacts of this regulatory strategy on hospital financial performance, patient access, and overall quality of care. In short, out-of-network caps represent a low-intensity regulatory intervention that can produce in-network price reductions without the need to regulate in-network rates directly. 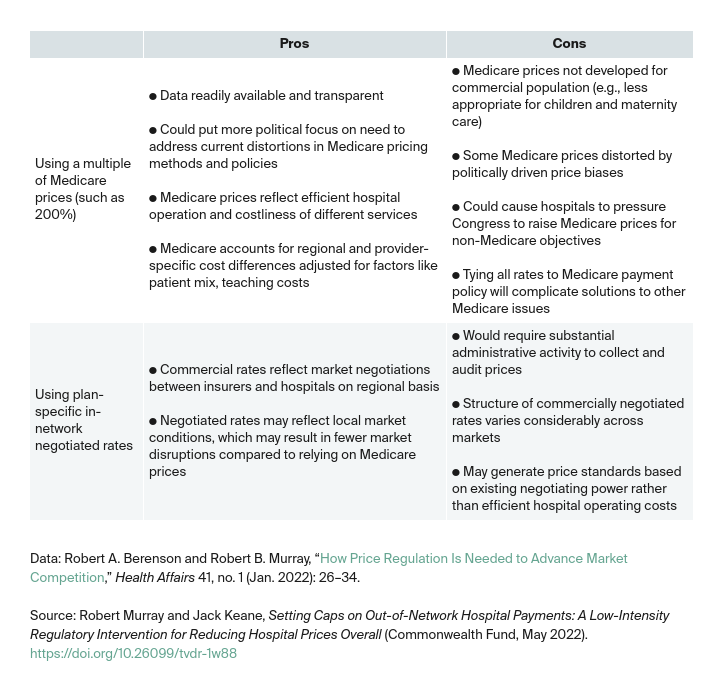