What Policymakers Can Do Beyond the Inflation Reduction Act

Santos De Hoyos is one of many patients who are on both Medicare Advantage and Medicaid. There are a number of reform options that could be implemented to expand coverage and improve affordability now that the Inflation Reduction Act had extended the American Rescue Plan Act’s subsidies. Photo: Dennis M. Rivera Pichardo/New York Times via Redux

Several proposals to reform the Affordable Care Act (ACA) were under consideration by the U.S. Congress as part of the Build Back Better Act (BBBA). Although this legislation did not pass, one provision was included in the Inflation Reduction Act (IRA): the extension of American Rescue Plan Act premium subsidies (scheduled to expire on January 1, 2023) through 2025. ARPA made premium subsidies, also known as premium tax credits, more generous for people with incomes below 400 percent of the federal poverty level (FPL) and extended eligibility to people with higher incomes, giving those people the option to purchase subsidized coverage through the marketplaces.

The Urban Institute has estimated that extending ARPA premiums subsidies will keep 3.3 million people from becoming uninsured.1 It also will dramatically improve the affordability of health insurance premiums (Appendix Table 1).

In this brief, we examine the impact of five policy options that could continue to make coverage more accessible and affordable beyond the extension of ARPA subsidies.

The full version of the report from the Urban Institute is available here.

Option 1: Filling the Medicaid Gap in Nonexpansion States. This policy would make marketplace coverage available to low-income people excluded from marketplace premium subsidies in the 12 states that have not expanded Medicaid eligibility (Exhibit 1). In these states, the policy would “fill the gap” by providing access to premium subsidies for most individuals with incomes above traditional Medicaid eligibility levels and below 100 percent of poverty. For low-income people in nonexpansion states, the policy also would eliminate the employer coverage firewall that currently limits their access to premium subsidies if they can receive affordable insurance through their employer, and would increase the federal share of costs (FMAP) for Medicaid expansion adults in the other states. 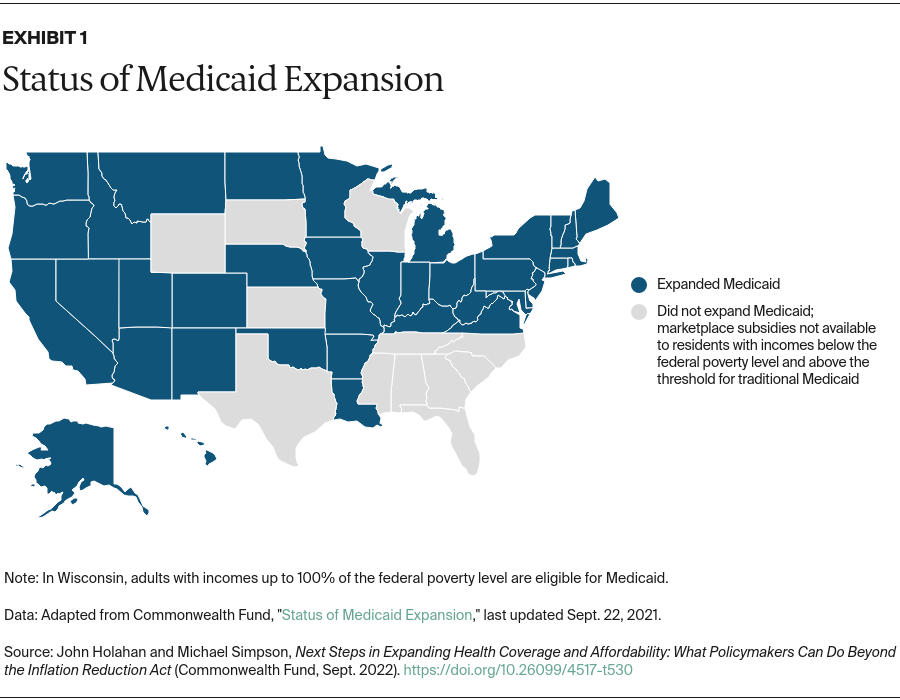 Option 2: Reducing the Employer Affordability Threshold. This policy would improve access to marketplace coverage by lowering the threshold above which employer coverage is deemed unaffordable. Currently, the employee affordability threshold is 9.61 percent of income. Under this proposal, people whose premiums for employer coverage exceed 8.5 percent of income would be considered to have unaffordable coverage and could enroll in a marketplace plan.2

Option 3: Adding a $10 Billion Reinsurance Fund. This policy would fund reinsurance to pick up the cost of medical expenditures above a certain threshold, thus reducing risk for insurers and making nongroup insurance more affordable for people in all states who are ineligible for subsidies. Some states already provide reinsurance in partnership with the federal government under “innovation waivers” that allow them to modify parts of the ACA.3

Option 5: Enhancing and Funding Marketplace Cost-Sharing Subsidies. The final policy would increase and expand cost-sharing subsidies, also known as cost-sharing reductions (CSRs), for subsidized ACA plans for low-income people. This policy would increase CSRs and tie premium tax credits, currently tied to silver-tier marketplace plans, to gold-tier plans. CSRs under this reform would be fully federally funded, which would reduce marketplace premiums because insurers currently pay for the CSRs and cover their costs by raising premiums on benchmark silver-tier plans. Federal funding for the CSRs would eliminate this practice, known as “silver loading.”

We analyzed the individual and cumulative impact of these proposals on coverage and costs, starting from the baseline assumption of extended ARPA premium subsidies under the IRA.

Option 1: Filling the Medicaid Gap in Nonexpansion States. The expansion of marketplace coverage would reduce the number of uninsured by 1.9 million in 2023 (Appendix Table 2). About 2.5 million additional people would receive marketplace subsidies.

Filling the Medicaid gap in nonexpansion states would cost the federal government $27.0 billion in 2023, largely because of greater costs for marketplace subsidies. Households would save $5.2 billion because of access to subsidized coverage. Overall health spending would increase by $14.5 billion in 2023.

Option 2: Reducing the Employer Affordability Threshold. Lowering the employer affordability threshold to 8.5 percent would reduce the number of uninsured by 109,000 in 2023 (Appendix Table 4). Most people who would gain coverage would be those with incomes between 138 percent and 300 percent of poverty.

This policy would increase federal government spending by $2.4 billion in 2023, but some of this would be offset by $400 million in increased revenue because wages, which are taxable, would increase as employer health insurance premiums, which are generally not taxable, decrease. Households would see savings of $0.6 billion, and employers would spend $0.9 billion less on premiums because of lower levels of employer coverage.

Option 3: Adding a $10 Billion Reinsurance Fund. This policy would lower marketplace premiums and reduce the number of people uninsured by 198,000 in 2023 (Appendix Table 5).

Net federal government spending would increase by $1.1 billion in 2023. Because reinsurance would lower premiums, the federal cost of marketplace premium tax credits would fall by $7.5 billion, largely offsetting the $8.7 billion increase in spending for reinsurance.4 Households would see minor savings because premiums would fall for those with unsubsidized coverage, and a small number would leave employer insurance for less expensive nongroup plans. Because there would be fewer covered workers, employers would spend slightly less on premiums.

Option 4: Increasing the Federal Medicaid Matching Rate in Expansion States. This policy would shift about $7 billion in payments from states to the federal government but would not affect coverage nor increase overall spending on health nationwide in 2023 (Appendix Table 6).

Option 5: Enhancing and Funding Marketplace Cost-Sharing Subsidies. As seen in Appendix Table 7, the number of uninsured would fall by 1.5 million in 2023 under this policy. Employer coverage would drop by 810,000 as more people shift to marketplace plans. Two million more people would receive subsidies, and private nongroup coverage would increase by 2.3 million.

Federal government spending under this policy would be higher by $13.0 billion in 2023. Spending for cost-sharing subsidies would increase by $12.2 billion, but there would be only a small increase in federal funding of marketplace premium tax credits despite the new enrollment, because of the decline in premiums. Household spending would fall by $4.8 billion, while employer spending on premiums would drop by $4.5 billion.

Cumulative Impact on Coverage and Spending for 2023

Exhibit 2 shows the change in coverage and spending for each incremental reform. Together, the five policies would provide coverage for 3.7 million more people in 2023. Filling the Medicaid gap and improving cost-sharing subsidies would have the greatest impact on coverage. These two policies would also have the most significant effect on federal spending. If all five policies were enacted, federal spending would increase by $50.4 billion in 2023. 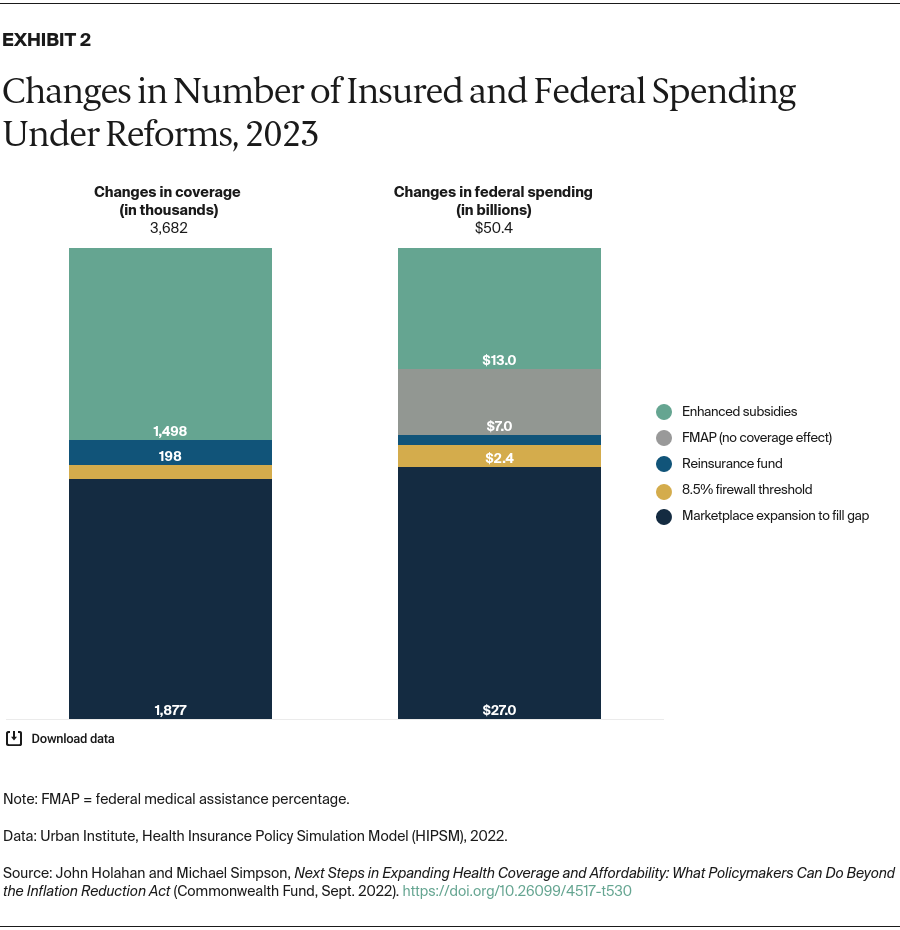 10-Year Estimates of Federal Spending and Impact on the Deficit

Exhibit 3 shows that over 10 years, the five policies combined would increase federal spending by $606 billion and add $575 billion to the federal deficit (Appendix Table 8). The changes to federal spending would be larger than the total effect on the deficit because several of the options would reduce the number of people enrolled in employer-sponsored insurance. As economic theory suggests, we assume that reduced employer premium spending would be passed back to workers in the form of higher wages. Because wages are taxable, whereas health insurance premiums generally are not, federal tax revenues would increase, offsetting a portion of new spending. 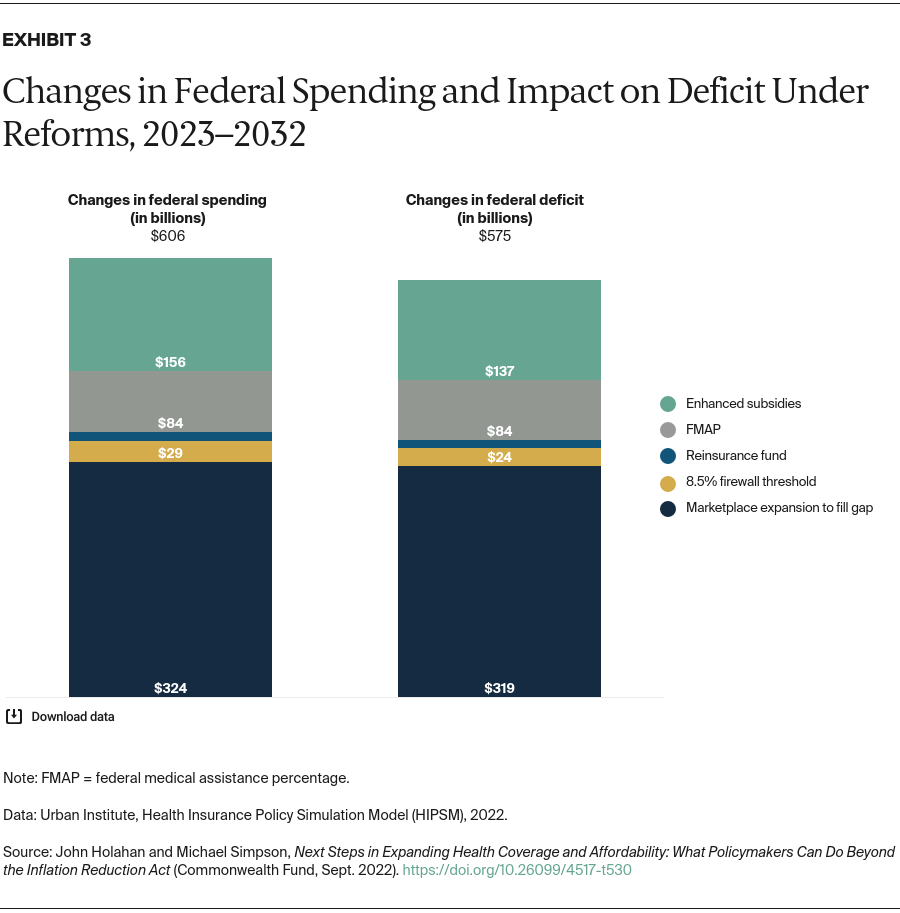 During a 10-year period, each policy alone would have a relatively modest impact on the deficit. Filling the Medicaid gap and improving cost-sharing subsidies would be the costliest reforms. Cumulatively, these options would increase federal spending over 10 years by $606 billion and increase the federal deficit by $575 billion. In the months ahead, policymakers may decide that the value of providing affordable coverage to more people is worth investing in these policies.

Our estimates use the Urban Institute’s Health Insurance Policy Simulation Model’s (HIPSM) baseline for 2023. HIPSM is a detailed microsimulation model of the health care system designed to estimate the cost and coverage effects of proposed health policy options.5 HIPSM is based on two years of the American Community Survey, which provides a representative sample large enough to produce estimates for individual states or smaller regions such as cities.

Our analysis is simulated for 2023 and assumes that reforms are fully phased in by that year. By 2023, economic conditions are expected to be stable following the COVID-19 pandemic and the 2020 recession. We assume, consistent with Congressional Budget Office projections, that the economy will have largely recovered from the pandemic and recession by that time. During preparation of this brief, the rate of inflation had increased considerably, the Federal Reserve has initiated a series of interest rate increases, and the war between Russia and the Ukraine was in progress. In the future, any of these factors could affect the underlying assumption about economic stability.

John Holahan and Michael Simpson, Next Steps in Expanding Health Coverage and Affordability: What Policymakers Can Do Beyond the Inflation Reduction Act (Commonwealth Fund, Sept. 2022). https://doi.org/10.26099/4517-t530