Hospital Cost of Care, Quality of Care, and Readmission Rates: Penny-Wise and Pound-Foolish?

A study of Medicare beneficiaries admitted to U.S. hospitals with congestive heart failure or pneumonia showed no definitive connection between the cost and quality of care, or between cost and death rates.

Hospitals face increasing pressure to lower the cost of health care while at the same time improving quality. Some experts are concerned about the trade-offs between the two goals, wondering whether hospitals with lower costs and lower expenditures might devote less effort to improving quality. Critics wonder if the drive to lower costs might create a "penny-wise and pound-foolish" approach, with hospitals discharging patients sooner, only to increase readmission rates and incur greater inpatient use—and costs—over time. To examine the relationships between quality and cost, researchers analyzed discharge, cost, and quality data for Medicare patients with congestive heart failure and pneumonia at more than 3,000 hospitals. 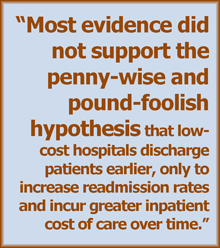 Understanding national patterns of quality and cost are a critical part of policymakers' efforts to improve the value obtained from health care dollars. In this study, researchers found limited evidence to support the "penny-wise and pound-foolish" hypothesis: that low-cost hospitals discharge patients earlier but have higher readmission rates and greater downstream inpatient costs. Compared with higher-cost hospitals, lower-cost hospitals had only slightly higher readmission rates for CHF but did not generate higher costs for either CHF or pneumonia. The authors suggest that future work might examine whether some of the variation in costs between hospitals may be related to structural differences, including type of governance, extent of health information technology adoption, and degree of vertical integration with outpatient practices.

The authors conducted an observational cross-sectional study of more than 3,000 non-federal U.S. hospitals discharging Medicare patients for congestive heart failure or pneumonia in 2006. For each condition, the researchers examined the association between hospital cost of care and the following variables: process quality of care, 30-day mortality rate, readmission rate, and six-month inpatient cost of care.