An ambitious program in the United Kingdom that links physician payment increases to achievement of quality-of-care targets reduced a shortage of general practitioners, improved income and morale, and reduced working hours. Socioeconomic disparities in chronic disease treatment narrowed as well, but the program's impact on medical professionalism and long-term patient outcomes has yet to be determined. 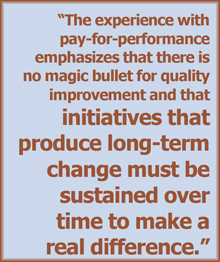 After a decade of low morale and perceived poor working conditions, a 2001 survey found that 90 percent of U.K. general practitioners (GPs) felt they were overworked, undervalued, and underresourced. To address a shortage of GPs, improve physician morale, and address public concerns about quality of care, the U.K. Department of Health in 2004 negotiated a new GP contract that increased payments to practices based on performance on more than 100 clinical and health improvement indicators. The authors of this Commonwealth Fund–supported study examined the intended and unintended effects of this pay-for-performance program on the supply of GPs, quality of care, practice behavior, and income.

The program achieved successes in improving morale, reducing a shortage of GPs, and improving chronic disease management. However, introducing a large and complex incentive scheme may have produced some adverse consequences. For instance, the authors point out that it may make physicians more focused on meeting targets than on meeting patients’ needs. Looking forward, the authors conclude the following lessons for other health systems looking to initiate similar reforms: install the necessary infrastructure (e.g., by subsidizing health information technology systems); establish baseline performance and set targets accordingly; involve physicians and patient groups from an early stage; base indicators on important outcomes, if available, or on processes with strong evidence of improved outcomes; test indicators before introducing them widely; regularly review all elements of the initiative and their impact on patient outcomes; and monitor effects on professional behavior and morale.