Access, Affordability, and Insurance Complexity Are Often Worse in the United States Compared to 10 Other Countries

A 2013 survey conducted in 11 countries finds that U.S. adults are significantly more likely than their counterparts to forgo health care because of the cost, to have difficulty paying for care even when they have insurance, and to deal with time-consuming insurance issues.

Compared with the health systems of other industrialized nations, the U.S. system is an outlier in terms of health care cost, access, and affordability. Findings from a new 11-country survey from The Commonwealth Fund, published by Health Affairs, offer a baseline and benchmarks to assess the progress of U.S. insurance reform efforts. 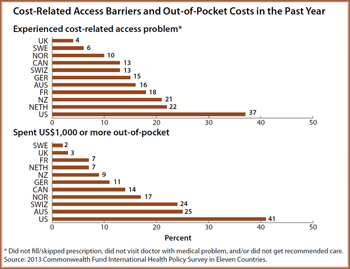 The United States is beginning to implement health insurance expansions and market reforms. While the survey highlights the vulnerability of the uninsured and the importance of expanding coverage, it also indicates that having coverage alone is not sufficient. Effective insurance design, the researchers say, balances cost-sharing responsibilities with people’s ability to pay and ensures coverage of effective care. Other countries’ efforts to enhance access to primary care, including providing after-hours care and simplifying administrative complexity, also provide insights for U.S. reforms looking forward.

Approximately 20,000 adults in Australia, Canada, France, Germany, the Netherlands, New Zealand, Norway, Sweden, Switzerland, the U.K., and the U.S. were surveyed between February and June 2013. The survey focused on people’s experiences with their country’s health care system, particularly those related to accessing and affording health care.

Across the industrialized world, residents of the U.S. are the most likely to endorse major reforms to their health care system, perhaps signaling difficulty in affording care and dealing with insurance paperwork and complexity.