Where Are We on the Diffusion Curve? Trends and Drivers of Primary Care Physicians' Use of Health Information Technology

Adoption of health information technology (HIT) by physician practices rose considerably from 2009 to 2012, yet solo physicians lag practices of 20 or more and certain functions—like electronically exchanging information with other physicians—have been adopted by only a minority of providers. Physicians who are part of an integrated delivery system, share resources with other practices, and are eligible for financial incentives, have higher rates of HIT adoption.

Doctors are using HIT in greater numbers, spurred on in part by the Health Information Technology for Economic and Clinical Health (HITECH) Act of 2009, which provided billions to help build a national HIT infrastructure. Commonwealth Fund researchers analyzed data from surveys of primary care physicians conducted in 2009 and 2012 to check on the progress of HIT adoption and to see how certain factors—like being part of an integrated health system or using shared technical assistance programs—can influence technology take-up. 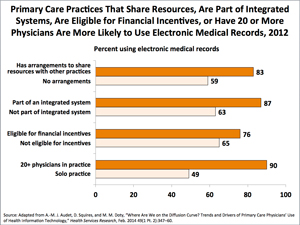 Twice as many physicians in integrated delivery systems reported having high HIT functionality, but only one-fourth of physicians said they practice in such a setting, the study found. The authors say, however, that the provision of financial incentives and other support could help practices take up HIT. Specifically, the authors say that "attention should be placed on technical assistance programs that can effectively outreach to practices in a variety of settings, such as the Office of the National Coordinator’s Regional Extension Center, located in every region of the country."

The authors examined data from the 2012 and 2009 Commonwealth Fund International Health Policy Survey of Primary Care Physicians. The surveys were conducted in both years between March and July. The 2012 sample comprised 1,012 and the 2009 sample 1,442 primary care physicians.

Although federal funds have led to a rapid expansion of health information technology, solo practices continue to lag in adoption. Technical assistance programs and financial incentives could help bring these physicians up to speed and enable them to provide high-quality care more efficiently.