Taking into account all the health insurance expansions initiated by the Affordable Care Act (ACA), an estimated 20 million Americans have gained coverage as of May 1, 2014. These include young adults who gained coverage under parents’ policies, people who bought plans in the marketplaces, individuals who purchased coverage directly from insurers, and adults and children who enrolled in Medicaid or the Children’s Health Insurance Program.

When the Affordable Care Act’s first open enrollment period closed on March 31, 8 million people had purchased coverage through the individual marketplaces—a number that exceeded expectations. But this much-anticipated enrollment figure does not tell the whole story. In a New England Journal of Medicine “Health Policy Report,” The Commonwealth Fund’s David Blumenthal, M.D., M.P.P., and Sara R. Collins, Ph.D., assess the ACA’s record to date and discuss enrollment not only through the marketplaces but also through the other critical vehicles used by the law to extend coverage.

Highlights from the Report

The Future of Health Care Coverage and the Affordable Care Act

The authors estimate that, overall, 20 million Americans have gained coverage as of May 1 under the ACA, with many of them previously uninsured. The CBO projects that the law will decrease the number of uninsured by 12 million this year and by 26 million by 2017. Early polls show that the proportion of U.S. adults lacking health insurance has dropped significantly since the third quarter of 2013.

As the number of individuals benefitting from the law grows, it seems less likely that the law will be repealed wholesale, the authors say, although there could be significant modifications. Experiences will vary widely across the states, however. People in states that have decided not to expand Medicaid will not benefit as much from the law. Since many of these states have high uninsured rates to begin with, the ACA may have the unintended consequence of increasing disparities across regions, even as it reduces the number of uninsured people overall.

Ultimately, the future of the coverage expansions will depend on our ability to control health care costs for consumers, employers, and the government, the author say. The use of narrow networks—in which health plans require enrollees to use lower-price providers and charge patients who go out of network—is one way of controlling costs, but this solution may leave Americans dissatisfied. Rather, the authors believe “the next great challenge facing the nation” is “developing and spreading innovative approaches to health care delivery that provide greater quality at lower cost.” 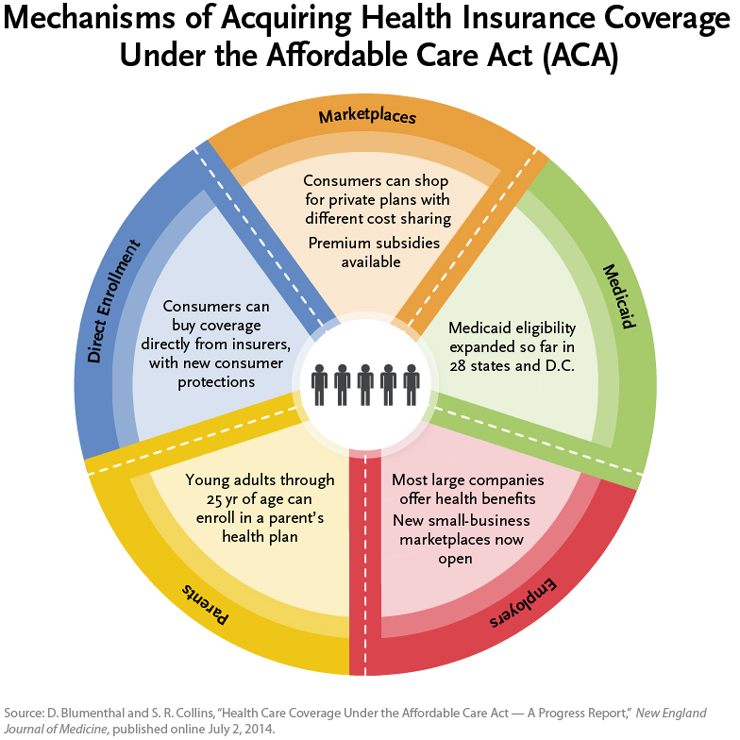 Despite the intense focus on enrollment through the individual marketplaces, the overall coverage gains made under the Affordable Care Act tell a bigger story. The combination of marketplace coverage, young adult enrollment in parents’ plans, policies purchased directly from insurers, and enrollment in Medicaid or the Children’s Health Insurance Program has enabled an estimated 20 million Americans in total to gain health insurance as of May 1, 2014.