The patient-centered medical home seeks to expand patients’ access to primary care, promote prevention, and ensure that care is well coordinated. National survey data show that the number of medical home initiatives and the number of patients they serve have grown significantly since 2009. Current initiatives tend to be larger and have no specified end dates, while per-member per-month fees are higher. These findings suggest that stakeholders recognize the importance of investing in primary care and the substantial time and effort required to change practice patterns and provider behavior.

Strengthening primary care is a key thrust of health care delivery reform efforts in the United States and the patient-centered medical home model is often a core component. Medical homes, whether organized by health plans, state Medicaid programs, or other entities, rely on multidisciplinary care teams, care managers, patient registries, and other tools to expand access, promote prevention, and coordinate patient care. To understand the prevalence and nature of these initiatives, Commonwealth Fund–supported researchers fielded a nationwide survey of patient-centered medical homes in 2013 and compared the results with a similar survey fielded in 2009. 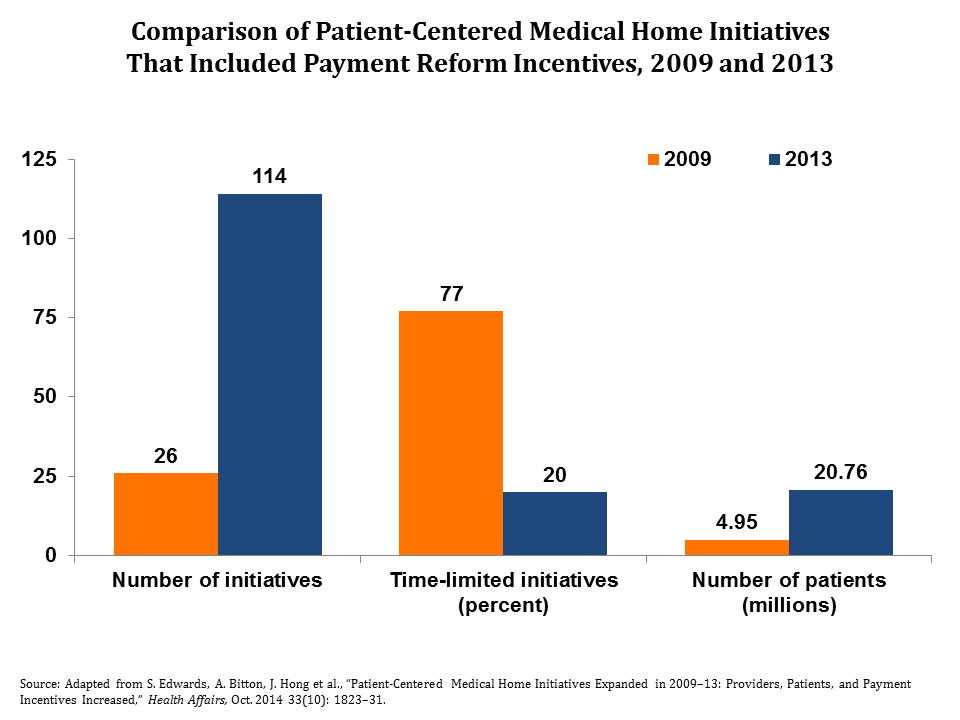 "The longer-term, more open-ended nature of the current patient-centered medical home initiatives suggests a recognition of the importance of sustained investment in the primary care infrastructure."

Based on substantial growth in the number of medical homes and payers’ commitment to the model over the long term, there appears to be a recognition that reforming primary care will require considerable time and resources. Evaluations of early medical home initiatives have found mixed results regarding their ability to improve care and control costs, but today’s initiatives are learning from past experiences and providing greater incentives to control the total costs of care.

As in the 2009 survey, the researchers surveyed all patient-centered medical homes that featured external payment incentives to participating providers. They identified medical homes through public databases, literature review, web searches, and expert consultation. The survey included questions about the process used to select participating practices, medical home recognition standards, payment methodologies, use of consultants, involvement in learning collaboratives, and planned evaluations. Of the 172 patient-centered medical home initiatives the researchers identified, 119 incorporated payment reform in their model and thus met inclusion criteria. Of these, 114 (96%) responded to the survey. Collectively, the initiatives included 63,011 providers caring for 20,764,676 patients.