Medicare at 50—Origins and Evolution

Since 1965, Medicare has provided millions of older and disabled Americans with guaranteed access to affordable health care. The broad popularity of the program, however, belies the intensely ideological struggle that preceded its creation and that continues in the debate over its future. In the first report of a two-part series published in the New England Journal of Medicine, David Blumenthal, M.D., Karen Davis, and Stuart Guterman trace the origins of Medicare and discuss its accomplishments, the changes it has undergone, and the challenges that remain.

“For 50 years, Medicare has been a reliable guarantor of the health and welfare of older and disabled Americans by paying their medical bills, ensuring their access to needed health care services, and protecting them from potentially crushing health expenses.”

Before Medicare, many Americans over age 65 faced a desperate health care outlook. Lacking employer-sponsored coverage, retirees faced medical bills roughly triple those for everyone else. Moreover, as a key voting constituency, the elderly were politically attractive. This reality led to the first national legislative action in the 1950s to provide health coverage to retirees. Although President Kennedy’s efforts on behalf of Medicare fell short in a close Senate vote in 1962, it would not be long before Lyndon Johnson took up the mantle, using his prodigious legislative skills to engineer passage of a Medicare package that included hospital coverage (Part A), physician coverage (Part B), and Medicaid, an additional program targeting the poor. As Blumenthal, Davis, and Guterman note, “the original Medicare program bore the imprint of its turbulent journey through Congress and the conventions of its time.” Its benefit package was modest. Substantial deductibles, copayments, and premium contributions were required, and there were no out-of-pocket cost limits. And neither long-term care nor prescription drug benefits were included. Similar to private insurance carriers, Medicare paid physicians based on prevailing local rates and reimbursed hospitals for “reasonable costs.”

Impact on Coverage and Care

Despite its initial limitations, Medicare has had a major impact on the lives of millions. While 48 percent of the elderly lacked health coverage in 1962, today just 2 percent do. And while the 15-year increase in life expectancy at age 65 achieved between 1965 and 1984 cannot be wholly attributed to Medicare, without its coverage many elderly Americans would simply not have had access to the medical advances that also have contributed to rising longevity. Beneficiaries rate their coverage highly. Compared with people under 65 who are covered by employer insurance or an individual plan, people with Medicare indicate they are less likely to have problems getting needed care and to have burdensome medical bills and negative insurance experiences.

While many changes made to Medicare over the decades mirror those occurring throughout U.S. health care generally, others have “blazed trails for the rest of the health care system in the United States and even in the rest of the world,” the authors say. Major changes have included:

The ACA contains key reforms intended to address some of Medicare’s ongoing challenges. Among these reforms: covering all effective preventive services without any beneficiary cost-sharing; closing the notorious “doughnut hole” in Part D prescription drug coverage (saving beneficiaries $11.5 billion since 2010); expanding on past reforms in provider payment; and, perhaps most important, creating the Center for Medicare and Medicaid Innovation to generate, evaluate, and disseminate improvement innovations. But other challenges have yet to be addressed. One is the complexity of Medicare coverage. Another is the growth in program spending, which, despite a recent slowdown in spending per beneficiary, is projected to outpace GDP growth as baby boomers continue to retire and enroll in Medicare. The authors will discuss policy options for meeting these and other challenges in the second part of the series.

Medicare has been enormously successful in improving the health of elderly and disabled Americans. Policymakers now must address its limitations to improve and strengthen the program for future generations. 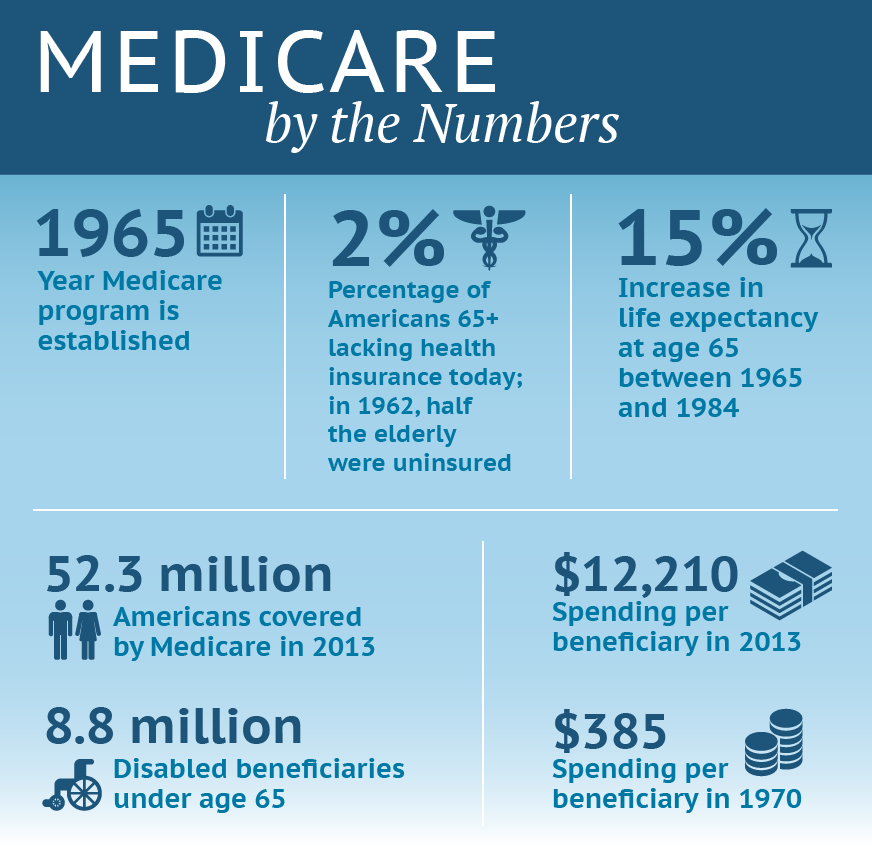