A conversation with researcher Benjamin Sommers

More than 12 million Americans are newly enrolled in Medicaid since the Affordable Care Act (ACA) enabled states to expand Medicaid eligibility rules. Because expansion is optional, however, only about half the states have chosen to open the program to people with incomes up to 138 percent of the federal poverty level—about $16,000 a year for one person or $33,000 for a family of four. States also have considerable discretion in designing their health insurance marketplaces and in other areas, such as whether and how to use navigators to help people sign up for coverage. In a new Health Affairs article (June 2015), Commonwealth Fund grantee Benjamin D. Sommers, M.D., Ph.D., and a team of researchers at Harvard University describe how policies in three states—Arkansas, Kentucky, and Texas—have helped or hindered the ACA’s efforts to expand Medicaid enrollment.

That’s right—expansion is optional. But states are required to either establish their own online marketplace to explain coverage options and help people apply or, alternately, use a federal version. But what those marketplaces look like, how they work, and whether or not the states offer any kind of assistance to people who want to sign up is still up to the states.

And there are some big variations in approaches, right?

Yes, very big. We looked at only three states—Arkansas, Kentucky, and Texas—but they range from fully engaged and supportive to essentially hostile. On one end of the spectrum, Kentucky expanded Medicaid eligibility, launched a successful state marketplace, supported an aggressive, sustained outreach campaign through the governor’s office, and employed an army of navigators to help people apply. By contrast, Texas didn’t expand Medicaid, did not set up its own marketplace, enacted restrictive legislation on navigators, and offered no in-person application assistance. [Arkansas took a third route. It is using federal dollars to purchase private insurance for low-income adults—instead of traditional Medicaid—known as the “private option;” established a federal–state partnership marketplace; and set up an in-person assistance program, but passed legislative prohibitions against the state’s spending any money to promote the ACA or the private option.]

Just what you might expect. People in Kentucky—and to a lesser extent Arkansas—were much more likely to know about the law, apply for coverage, and ultimately gain health insurance. And they also were more satisfied with the enrollment process than adults in Texas.

Even in states that supported Medicaid expansion, you found that a lot of people still weren’t aware that they might now qualify for Medicaid, correct? What are the implications here?

Awareness is a huge issue. Only about 40 percent to 50 percent of newly eligible Americans are aware that they now might qualify for Medicaid. And awareness is the number one predictor of whether or not someone will actually apply. So we still have a lot of work to do to make sure people understand their options. We should also remember that this is only year 1. When we launched the Children’s Health Insurance Program in 1997, it took about five years before we got up to current levels of participation of about 85 percent. 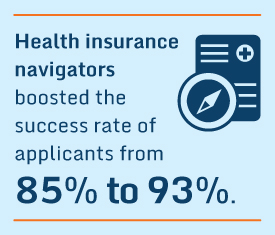 How important were the navigators in terms of helping people through the process?

They boosted the success rate of applicants by about eight percentage points [from 85% to 93%], which is a huge jump, so they seem to be making a significant contribution.

Did political affiliation have notable influence on whether or not people applied for coverage?

Not really. Political affiliation correlated with how people felt about the ACA’s perceived impact [18% of Republicans felt the law had hurt them personally vs. 11% of Democrats], but newly eligible individuals from both political parties were similarly likely to apply for coverage [Republicans had a roughly 38% chance of applying vs. 43% for Democrats].

Were there any issues with the enrollment process itself?

Generally speaking, the enrollment process seemed to go well for most people. Between 80 percent and 94 percent of those who applied ended up getting coverage. But among Latino applicants, the success rate was substantially lower—around 75%. More research is needed to find out why that is and what we can do about it.

Benjamin Sommers ([email protected]) is an assistant professor at the Harvard School of Public Health.