Americans' Experiences in the Health Insurance Marketplaces: Results from the First Month 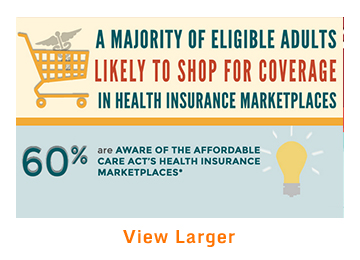 potentially eligible for the health reform law’s new insurance coverage options, whether private plans or expanded Medicaid. Among the survey’s key findings: 60 percent of potentially eligible adults are aware of the new marketplaces as a place where they might shop for coverage; 17 percent reported visiting the marketplaces in October to shop for a health plan; about one of five visitors were ages 19 to 29; and one of five visitors enrolled in a plan. Reflecting the technical problems that have plagued the federal marketplace and some state marketplace websites, 37 percent of those who did not enroll in coverage cited those technical difficulties as a reason. A majority of survey respondents, however, appear determined to gain coverage over the next few months.