Despite the difficult rollout of healthcare.gov, new data from states that are operating their own marketplaces show that Americans are slowly but surely enrolling in the new insurance coverage options now available under the Affordable Care Act. 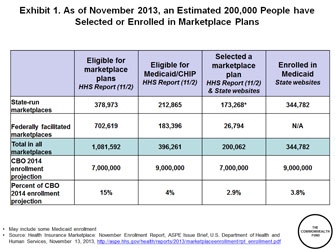 A November Enrollment Surge. The latest enrollment figures from the 14 states that are running their own marketplaces show that enrollment has climbed to at least 200,000 people nationwide (Exhibit 1). This is up from an estimated 106,000 people who had selected a plan or enrolled by November 2, according to the Department of Health and Human Services’ first enrollment report, released earlier this month. This latest figure does not account for any new enrollment in the federal marketplaces in 36 states, which is also likely to have increased since early November. Enrollment is now at about 2.9 percent of the 7 million people that the Congressional Budget Office projects will gain coverage through the marketplaces next year. As Noam Levey reported in the Los Angeles Times this week, enrollment was particularly strong in California, Connecticut, Kentucky, Minnesota, and Washington (Exhibit 2).

Many states are also reporting significant enrollment in Medicaid and the Children’s Health Insurance Program, particularly in Oregon, where the state mailed 260,000 "Fast Track" enrollment letters to those potentially eligible and more than 62,000 people have signed up as a result. Among states that are running their own marketplaces and reporting Medicaid enrollment, more than 344,000 people have enrolled in the program. This is about 3.8 percent of the 9 million people projected to gain coverage through the program next year. 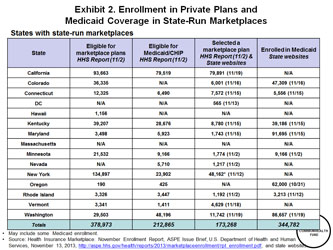 Who’s Enrolling? While it is far too early to assess the age and health distribution of marketplace enrollees, there is some evidence that young adults are visiting the marketplaces and enrolling in health plans. Young adults have disproportionately high rates of uninsurance and their participation is critical to balancing risk in the marketplaces and helping stabilize premium growth over time. Reuters reported this week that in Connecticut, Kentucky, Washington, and Maryland, 20 percent of those enrolled so far are ages 19–34 . The latest data from California show a similar percentage of young adults enrolling in the state’s marketplace plans.

And an October Commonwealth Fund survey of people potentially eligible for the law’s new coverage options found that a majority (58%) of young adults in the survey who had not yet enrolled said they were likely to go to the marketplaces and shop for a health plan by the end of open enrollment, on March 31, 2014 (Exhibit 3).

Looking Forward. While the poor performance of healthcare.gov has been a huge and largely unforeseen implementation challenge, it does not spell doom for the future performance of the Affordable Care Act. Indeed, these latest enrollment figures show that people are going to the marketplaces and signing up for coverage, despite the obstacles. 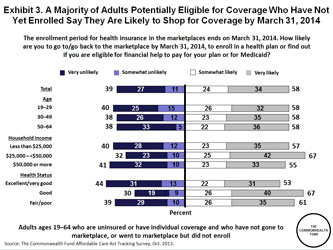 The gain in health insurance coverage among an estimated 3 million young adults over the last three years as a result of the law has already put the country on track to reverse the decades-long growth in the uninsured population. The significant marketplace website problems, which may take months to fully repair, are not the first challenge encountered in the implementation of this complex law, nor will they be the last. This latest challenge is likely to be overcome in time. After three-and-a-half years of work by stakeholders in both the public and private sectors to bring about much-needed changes in U.S. insurance markets, implementation is in full swing and, if trends continue, more and more people will obtain coverage over the next several months.