The health reform law’s major health insurance expansions and market reforms will take effect in just eight months. These changes have the potential to significantly reduce the numbers of people who are uninsured and underinsured nationwide, as well as limit the associated financial difficulties.

A report released in April by The Commonwealth Fund underscores the need for these new coverage solutions. Based on the Fund’s 2012 Biennial Health Insurance Survey, the report finds that in 2012 an estimated 84 million adults ages 19 to 64 did not have health insurance for the full year or were underinsured and unprotected from high out-of-pocket medical costs. The analysis also found that millions of U.S. adults are struggling to pay medical bills and avoiding timely health care for financial reasons. There was a bright spot in the report: an estimated 3.4 million young adults ages 19–25 gained insurance coverage between 2010 and 2012, likely as a result of the Affordable Care Act’s provision that allows young adults to stay on their parents’ health plans until age 26.

This blog post examines both the Affordable Care Act’s potential to cover millions of people, as well as remaining coverage gaps.

The Potential of Health Reform. The enrollment period for Americans to sign up in the Affordable Care Act’s new insurance coverage options for the year 2014 begins on October 1 of this year in all 50 states and continues through March 31, 2014. After March, people may enroll for 2015 coverage between October 15 and December 7. But eligible citizens also may enroll outside these time frames if they lose other sources of coverage for such reasons as job loss or the death of a spouse, partner, or parent. People without health insurance or who are poorly insured in every state will be able to go to a new “health insurance marketplace” and find out if they are eligible for one of the law’s subsidized insurance programs: new subsidies to cover the cost of a private health plan sold through the marketplaces for people earning up to $94,000 for a family of four, or—in participating states—a newly expanded Medicaid program for people with incomes up to $32,000 for a family of four. 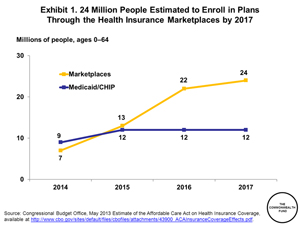 The Commonwealth Fund analysis found that about 85 percent of the 84 million adults who were uninsured or underinsured in 2012 had incomes that would make them potentially eligible for either the subsidized private plans or the expanded Medicaid program. Those uninsured and underinsured adults with incomes above the subsidy thresholds, who must buy coverage on their own, will be guaranteed an offer of comprehensive coverage regardless of any preexisting condition and a premium that will predominantly reflect the value of their health plan, rather than their individual health status.

Implementation status. Implementation of the Affordable Care Act has been in full swing since the law passed in 2010. The federal government has issued nearly all regulations and guidance necessary to meet the October 1 deadline for open enrollment. Sixteen states and the District of Columbia have received conditional approval to operate their own insurance marketplaces and seven states have received conditional approval to run their marketplaces in partnership with the federal government. The federal government will fully operate marketplaces in 27 states.1 Both the Department of Health and Human Services and states are soliciting applications for health plans that will be sold through the marketplaces, with certification in the federal exchanges expected in early September.

States and the federal government are working hard to ensure the marketplaces will be open for enrollment on October 1. And outreach activities to educate Americans about the new insurance options will likely gain momentum through the summer in all 50 states. Kaiser Family Foundation’s latest poll underscores the importance of these efforts: 42 percent of adults are unaware of the Affordable Care Act and its provisions. Indeed, the Congressional Budget Office is predicting gradual gains in enrollment as awareness grows; its latest estimates show that 7 million people will enroll in the health plans through the exchanges in 2014, increasing to 13 million in 2015, 22 million in 2016, and 24 million by 2017 (Exhibit 1). 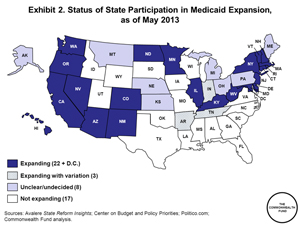 The biggest near-term risk to realizing the law’s coverage potential is last summer’s Supreme Court decision that allowed states to opt in or out of the law’s Medicaid expansion. In states that opt out of the expansion, people earning above the poverty level, about $23,000 for a family of four, will be eligible for subsidized private coverage though the new marketplaces. However, when the law was written, it was assumed that most poor families would be eligible for the Medicaid expansion; no similar provision was made for the poorest families to gain subsidized private coverage. So, for states that do not participate in the expansion, there currently will be no new subsidized insurance option for these families. So far, 22 states and the District of Columbia have announced that they will expand their Medicaid programs, and at least three states are exploring alternative approaches to expanding their programs (Exhibit 2). About 25 states are either undecided or have decided not to participate in the expansion. In many of these states, residents are already more likely to be uninsured.

Remaining Coverage Gaps. Even if all states participate in the Medicaid program, many people may continue to lack health insurance. In particular, the law does not allow coverage of undocumented immigrants through Medicaid or subsidized private plans. It also bars undocumented immigrants from purchasing health plans through the insurance marketplaces. According to Jonathan Gruber, an economist at the Massachusetts Institute of Technology, an estimated 5 million undocumented immigrants will lack health insurance when the law is fully in effect. In addition, a number of people at any given time also may not be enrolled in insurance programs that they are eligible for, and some people may not be able to find a plan that fits their budget. Thus, there will be a continuing need to inform the public about the coverage options available to them, and to ensure the affordability of premiums over time.

Looking Forward. Enrollment in the law’s new coverage options may begin slowly next year and gain momentum as more people become aware of their eligibility and more states move forward with their Medicaid expansions. The Congressional Budget Office is predicting that the number of people without insurance will decline gradually over the next three years. But it will take the concerted efforts of federal and state policymakers and stakeholders to effectively use the tools provided by the Affordable Care Act, as well as additional policy levers, to ensure affordable health insurance for all U.S. residents over the next decade.

1. Utah plans to operate its small-business marketplace. The federal government will operate the state’s individual marketplace.

D. Blumenthal and S. R. Collins, Implementing the Coverage Provisions of the Affordable Care Act, The Commonwealth Fund, May 2013