Insuring the Future: Current Trends in Health Coverage and the Effects of Implementing the Affordable Care Act

In early 2014, Americans will experience a fundamental transformation in their health insurance system. The major health coverage provisions of the Affordable Care Act go into effect in January of that year, providing new options for people who do not have insurance and sweeping new protections for those who buy health plans on their own. The Congressional Budget Office projects that the combination of new subsidies for health insurance and consumer protections will enable 14 million uninsured people to gain coverage in 2014, and 27 million by 2021.

Using data from the Commonwealth Fund Biennial Health Insurance Survey of 2012, this report examines the current state of insurance coverage in the United States and its financial and health implications for working-age adults.

The percentage of young adults, ages 19 to 25, who were uninsured for any time during the prior year fell from 48 percent in 2010 to 41 percent in 2012, from 13.6 million to 11.7 million—a decline of 1.9 million (Exhibit ES-1). Indeed, nearly 8 of 10 (79%) young adults reported that they were insured at the time of the survey in 2012, up from 69 percent in 2010, or a gain in health insurance coverage for an estimated 3.4 million young adults. This marks an abrupt reversal in a decade-long upward climb in the number of uninsured young adults, one that is most likely the result of the Affordable Care Act’s requirement that children under age 26 be permitted to stay in or join a parent’s health plan. Meanwhile, uninsured rates for other age groups increased or stayed the same. 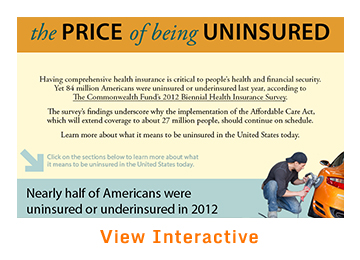 In 2012, nearly half (46%) of U.S. adults ages 19 to 64, an estimated 84 million people, did not have insurance for the full year or had coverage that provided inadequate protection from health care costs (Exhibit ES-2). Thirty percent, or 55 million people, were uninsured at the time of the survey or were insured but had spent some time uninsured in the past year. An additional 16 percent, or 30 million people, were insured but had such high out-of-pocket medical costs relative to their income that they could be considered underinsured.

The number of adults who had gaps in their coverage or were underinsured climbed steadily over the past decade, rising from 61 million in 2003 to 81 million in 2010, or from 36 percent of working-age adults to 44 percent (Exhibit ES-3). Between 2010 and 2012, however, there was little change seen. This stasis likely reflects both the gains in coverage among young adults and the countervailing deterioration in coverage for adults in older age groups.

Lower-Income Adults Are Uninsured and Underinsured at Higher Rates

Americans with low or moderate incomes continue to be less protected from health care costs than higher-income Americans, because they either are uninsured or have coverage with high cost-sharing requirements, whether copayments or coinsurance, relative to their income. Three-quarters of working-age adults with incomes under 133 percent of the federal poverty level ($14,856 for an individual or $30,657 for a family of four)—an estimated 40 million people—either experienced a time without health insurance or were underinsured in 2012 (Exhibit ES-4). Among adults earning between 133 percent and 249 percent of poverty ($27,925 for an individual or $57,625 for a family of four), 59 percent, or an estimated 21 million people, had a time without coverage or were underinsured. People with incomes under 250 percent of poverty comprised 72 percent of the total number of Americans who were uninsured or poorly insured in 2012.

While the number of adults reporting medical bills or debt problems climbed in the past decade, the number was statistically unchanged between 2010 and 2012. This is likely because there was some improvement in the coverage of young adults, but either no improvement or a deterioration in coverage for older age groups.

Costs Prevent Many Americans from Getting Needed Health Care

In 2012, more than two of five (43%) adults, or an estimated 80 million people, reported cost-related problems getting needed health care (Exhibit ES-3). This is up from 37 percent, or 63 million people, in 2003. These problems, which included not going to the doctor when sick or not filling a prescription, were most pronounced among people with no insurance or with inadequate coverage. More than two-thirds of adults (67%) who were uninsured at any time and more than half (51%) who were underinsured reported cost-related problems getting needed care.

The Affordable Care Act has already helped millions of young adults gain or maintain health insurance, banned carriers from placing limits on what they will pay and from cancelling policies retroactively because of illness, and improved the reliability of health insurance purchased in the individual market. Indeed, those protections may be partly responsible for the slowing rate of growth in underinsured adults over the past two years.

But it is imperative for federal and state policymakers to complete the rollout of the law’s central coverage provisions. These include expanded eligibility for Medicaid and for subsidized comprehensive insurance plans made available through the new insurance marketplaces. These changes will be reinforced with sweeping insurance market reforms, including banning insurers from charging people higher premiums based on health or gender or limiting or denying benefits because of preexisting health conditions, among others.

Achieving the goal of near-universal coverage will take time, and there are important caveats to note. First, the law does not provide subsidized coverage to people who are not in the U.S. legally. Jonathan Gruber, an economist at the Massachusetts Institute of Technology, has estimated that of people who will remain uninsured in 2016, about 5 million will be undocumented immigrants. Second, both the Congressional Budget Office and Gruber predict that many Americans will not be insured, even though they are eligible for the new coverage options, whether because they are not aware of their eligibility, they are unable to find an affordable premium, or they elect not to enroll.

Finally, the Supreme Court, while upholding most of the law, transformed the key requirement that states open their Medicaid programs to individuals with incomes up to 133 percent of poverty into an option. To date, about half the states have indicated they will participate in the Medicaid expansion. Some states, including Arkansas, are negotiating with the Department of Health and Human Services to use the funds intended for the Medicaid expansion to provide people newly eligible for the program with equivalent benefits through private insurance plans. While all states may eventually choose to participate in the expansion over the next decade, poor families in many states will continue to be at risk of going without health insurance even after the Affordable Care Act goes into full effect in 2014.