As of today, 26 states and the District of Columbia are expanding eligibility for Medicaid under the Affordable Care Act. But nearly 5 million uninsured people are at risk of falling into a coverage gap in states that are not expanding eligibility. The law originally required that all states expand Medicaid eligibility to cover people living with incomes up to 138 percent of the poverty level—or $15,856 for an individual and $32,499 for a family of four—but the June 2012 Supreme Court ruling made this optional. As a result, people with incomes above 100 percent of poverty are eligible for premium subsidies to purchase private plans in the marketplaces, but those under 100 percent of poverty in states that do not expand Medicaid do not have access either to Medicaid or subsidized private coverage.

States that do not expand the program also forgo millions in federal spending, even though residents in those states are helping to finance the Medicaid expansion through their income taxes. For example, in Texas—where 1 million people may be left without access to the law’s new subsidized coverage options this year—the state will experience a net loss of $9.2 billion in federal tax revenues for the expansion without realizing its benefits in 2022.

To fill the coverage gap and capture some of the lost revenue, some states that were initially hesitant to expand Medicaid are now pursuing alternative approaches to cover more low-income residents. (See interactive map). In order to receive federal matching funds, states must propose a pathway to coverage for all adults in the newly eligible Medicaid group under the law (i.e., adults with incomes up to 138 percent of poverty). Arkansas, Iowa, and Michigan submitted so-called Section 1115 waivers to the Centers for Medicare and Medicaid Services (CMS) and have received approval to customize their expansions; Pennsylvania has applied for a similar waiver. Utah and New Hampshire are considering different options. The legislatures and governors in these states, which have wanted to make health insurance available to their poorest residents but have not been able to agree on an approach, have turned to the use of private insurance and greater cost-sharing as compromises. 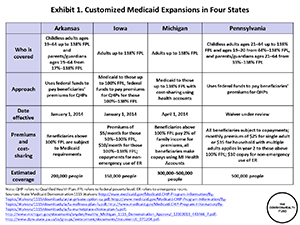 Arkansas received CMS approval in September 2013 for the Arkansas Health Care Independence Program. The program covers newly eligible adults by paying premiums for private plans available through the state’s federally facilitated health insurance marketplace. The newly eligible, or Private Option Beneficiaries, are childless adults ages 19 to 64 with incomes up to 138 percent of poverty, and parents or guardians under age 65 with incomes between 17 and 138 percent of poverty.1 Beneficiaries have access to additional services that are covered by Medicaid but not included in a private health plan. Enrollees are not required to pay premiums. Cost-sharing for those with incomes above 100 percent of poverty cannot exceed 5 percent of family income. The state estimates that the demonstration will cover 200,000 people.

Iowa received CMS approval for two Section 1115 waivers in December 2013. The first, the Iowa Wellness plan, expands Iowa’s current Medicaid program to adult residents ages 19 to 64, with incomes up to 100 percent of poverty, through a medical home model. Wellness plan beneficiaries with incomes between 50 percent and 100 percent of poverty are subject to a $5 monthly premium per household.

The second waiver, the Iowa Marketplace Choice Plan, operates like the Arkansas plan. The state covers residents ages 19 to 64 with incomes from 100 percent to 138 percent of poverty by paying premiums for private plans available through the state’s federally facilitated marketplace. And as in Arkansas, beneficiaries have access to extra Medicaid benefits, sometimes called wraparound services. Marketplace Choice enrollees will contribute no more than $10 per month per household. Premiums for both plans are waived the first year of enrollment and in subsequent years if certain healthy behaviors are met. Beneficiaries are subject to an $8 copayment for non-emergency use of emergency departments. Total cost-sharing, including both premiums and copayments, cannot exceed 5 percent of family income. Iowa expects 150,000 residents to gain coverage under this plan.

Michigan’s Section 1115 Medicaid waiver received CMS approval in December 2013. Healthy Michigan expands Medicaid coverage to all residents with incomes up to 138 percent of poverty, with those earning between 100 percent and 138 percent making premium payments equal to 2 percent of their household income. Under the plan, all beneficiaries contribute to a “MI health account” to pay their copayments. These copayments can be reduced by meeting certain criteria for healthy behavior, and total cost-sharing cannot exceed 5 percent of family income. Michigan estimates that up to 500,000 newly eligible beneficiaries will gain coverage under the plan.

Pennsylvania submitted a Section 1115 waiver in February 2014 for a program that will use Medicaid funds to pay premiums for private health plans through the state’s federally facilitated marketplace. Healthy Pennsylvania would cover childless adults ages 21 to 64 with incomes up to 138 percent of poverty, 19- to 20-year-olds earning between 44 percent and 138 percent of poverty, and parents or guardians ages 21 to 64 earning between 33 percent and 138 percent of poverty.2 During the first year, beneficiaries would be subject to copayments as outlined by the state’s existing Medicaid program. In the second year, enrollees ages 21 to 64, above 100 percent of poverty, would not be subject to copayments but required to contribute to the premium ($25 a month for individuals and $35 for households). Beginning in the second year, all beneficiaries would be subject to a $10 copayment for non-emergency use of the emergency department. Premium reductions could be achieved by meeting certain criteria for healthy behavior, as is the case in Iowa and Michigan, or by opting into the state’s voluntary Encouraging Employment program. The state estimates that up to 500,000 residents would gain coverage under this plan.

On the Horizon: More States Taking Action
More states appear to be going in this direction. Utah’s governor announced his intent last month to pursue a Section 1115 waiver from CMS to receive the funds the state would have been eligible for to cover the expansion population in the form of a block grant. And the New Hampshire legislature sent a bill to the governor this month that would expand coverage to newly eligible adults up to 138 percent of poverty by using federal funds to pay beneficiaries premiums for employer-sponsored insurance and for private plans through the federally facilitated marketplace. Indiana, Tennessee, and Virginia are also discussing Medicaid expansion variations. The states eyeing customized expansions are home to 600,000 people in the coverage gap. Combined with the estimated 1.4 million people who would be covered by the waivers in Arkansas, Iowa, Michigan, and Pennsylvania, a total of nearly 2 million people could gain coverage through these customized approaches—people who otherwise would be left without affordable insurance options.

These approaches will also help limit "churn," which results when changes in incomes force people to move from a Medicaid plan to a private plan or vice versa, often resulting in disruptions to care. However, the higher patient cost-sharing in these plans makes it critical to watch and evaluate these approaches to ensure coverage is as protective and affordable as it is for residents in states that have expanded Medicaid consistent with the law.

The Commonwealth Fund will update this blog post and map as states continue to move forward on the Affordable Care Act’s Medicaid expansion.

1. Prior to the waiver approval, working parents up to 16 percent of poverty were eligible for Medicaid.