A new analysis of the Affordable Care Act’s health insurance marketplace costs finds that, nationwide, marketplace premiums did not increase at all from 2014 to 2015, though there were substantial average premium increases in some states and declines in others. This weighted analysis is the most comprehensive to date as it examines:

The average premiums for the second lowest-cost silver plan—or benchmark plan for calculating the federal subsidy in a given state—were also unchanged. And the average deductible for a marketplace plan increased by just 1 percent year to year.

The 0 percent change in average premiums is unprecedented when compared with historic trends in both the individual insurance market and employer-based health insurance. Prior to the passage of the Affordable Care Act, from 2008 to 2010, premiums grew an average 10 percent or more per year in state individual insurance markets. Many factors underlie this year’s stability in marketplace premiums, but three important contributors were: an increase in the number of participating insurance carriers; the design of the marketplaces; and the risk stabilization programs for participating insurers.

The premiums presented are for a 40-year-old nonsmoker. Results are weighted to reflect the population distribution across rating regions. The data for single and family premiums are available in an interactive map. 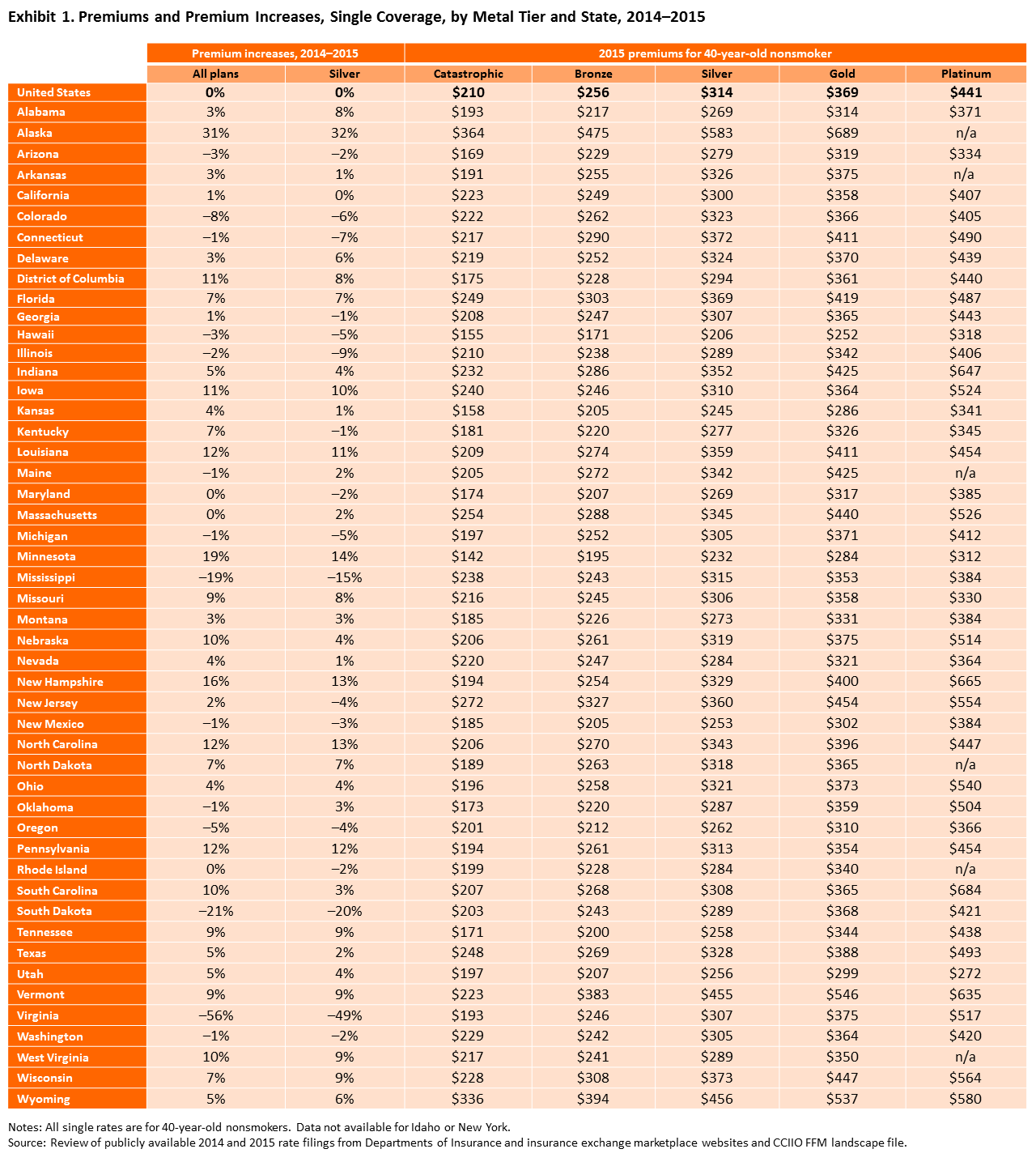 In certain states, those double-digit increases and decreases can be tied to a single insurer decision. In Minnesota, the state with the lowest premiums nationally in 2014, PreferredOne—the carrier with the lowest statewide premiums and largest market share—exited the market, driving up the average cost of a marketplace plan. In Virginia, Optima Health, a carrier charging $2,000 a month for a silver plan, a figure nearly seven times the cost of the average silver plan, dropped this expensive plan, thereby sharply decreasing the average cost for plans in Virginia.

In other states, entry by multiple carriers enhanced price competition, which made shopping around a good approach for consumers in the second enrollment period. In Georgia, Cigna, Coventry, United Healthcare, and Time Insurance entered the market, and the benchmark silver plan increased by 1 percent in the state. In Michigan, UnitedHealth Care, Physicians Health Plan, and Harbor Health Plan entered the market, and the average cost of all plans fell by 1 percent. 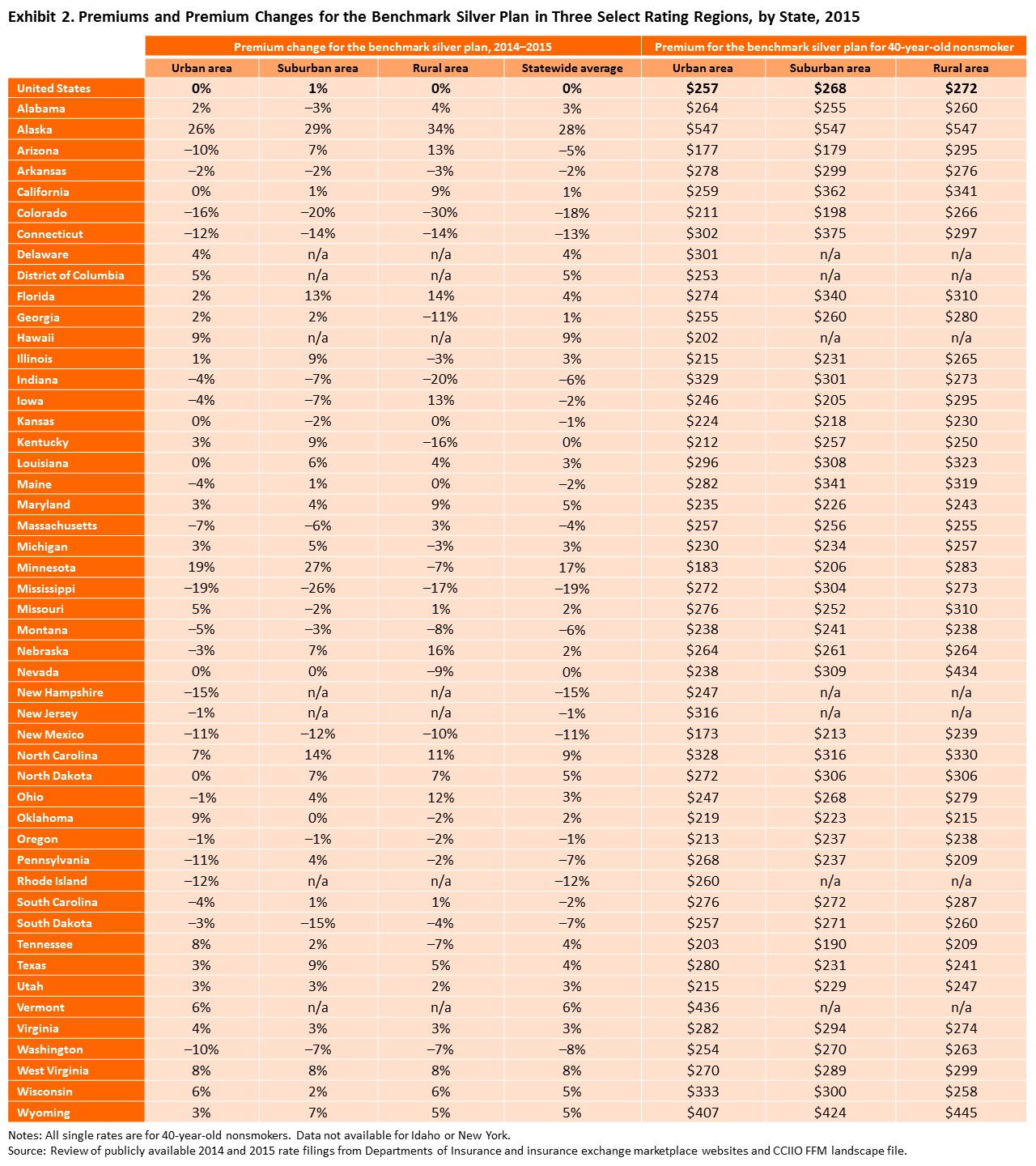 Urban, suburban, and rural rating regions experienced similar premium changes. Nationally, the average cost of a benchmark silver plan in 2015 is $257 in urban areas, $268 in suburban areas, and $272 in rural areas.

Nationally, average deductibles increased by 1 percent from 2014 to 2015, though, again, changes in deductibles varied considerably from state to state (Exhibit 3). Slightly more states saw increases than decreases (26 states versus 19). Massachusetts and Hawaii had the highest rates of increase in the average deductibles, at 32 percent and 28 percent, respectively. Washington, D.C., residents saw the greatest decrease—with average deductibles down by 16 percent. In 2015, bronze plans have average deductibles of $5,203; silver plans, $2,965; gold plans, $1,215; and platinum plans, $552. 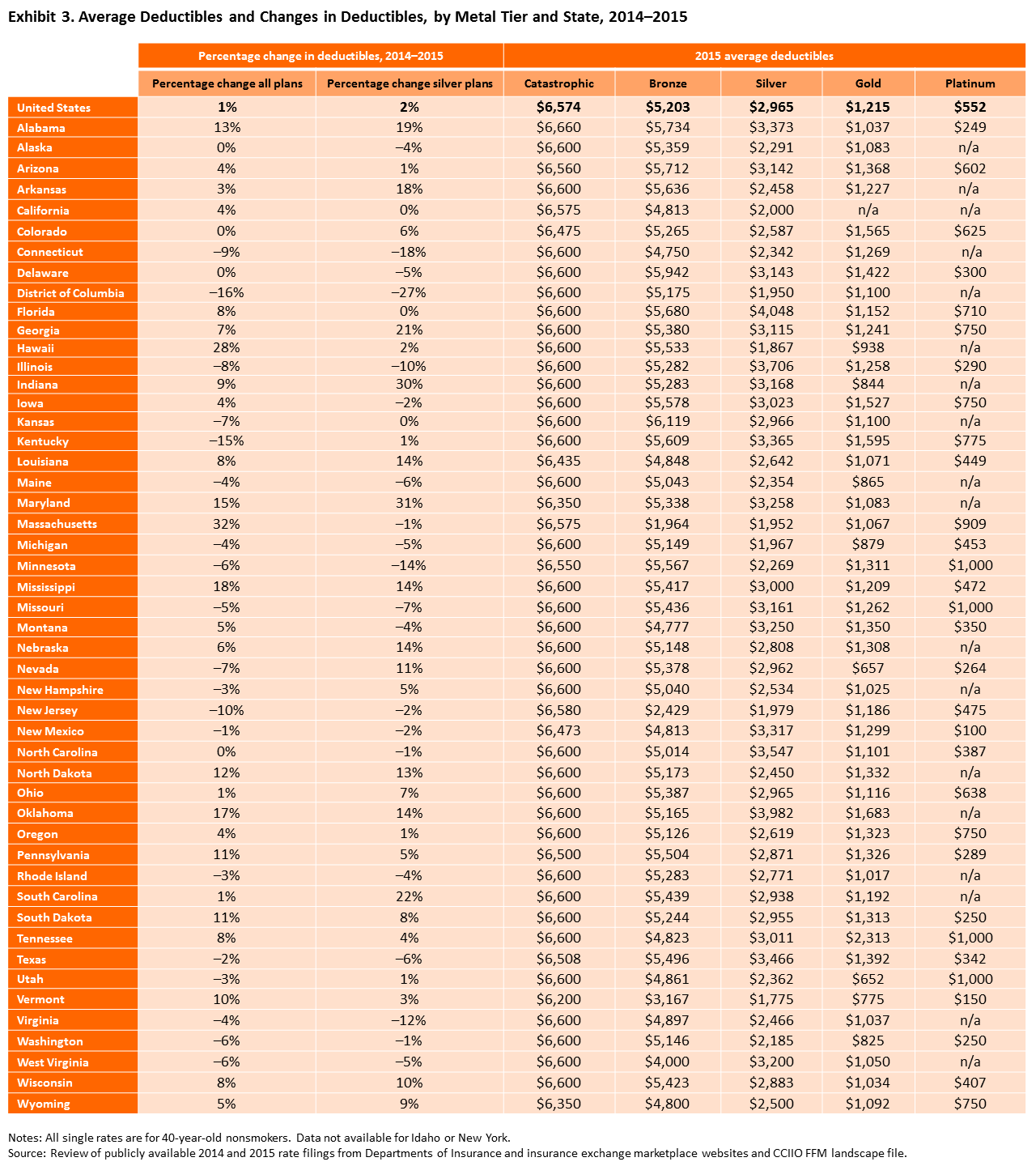 Among silver plans, average deductibles increased in 26 states and declined in 20 states. The changes ranged from increases of 31 percent and 30 percent (Maryland and Indiana, respectively) to a decrease of 27 percent (Washington, D.C.). There is substantial variation among states in average deductibles among silver plans, ranging from $4,048 in Florida to $1,775 in Vermont. Much of this variation is because of other aspects of the benefit package, such as copayment or coinsurance levels. 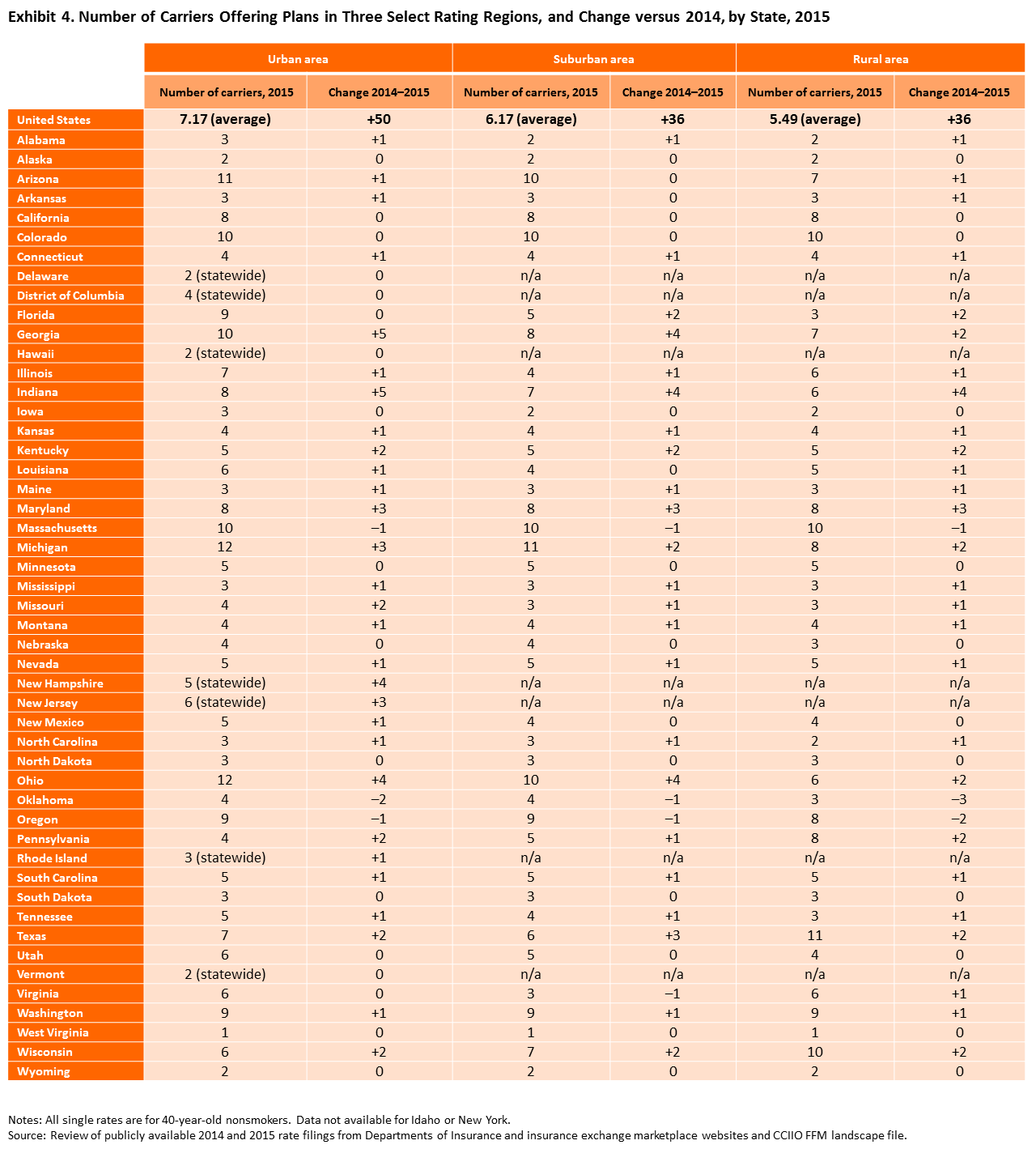 Why are marketplace insurance costs stable at a national level? One factor is the way the Affordable Care Act structured the marketplaces. Greater standardization of benefits through the metal tier structure, premium and cost-sharing subsidies that are tied to the silver plans, the transparency of plan information, and robust enrollment in 2014 are collectively increasing the competitiveness of the market. Sixty-four percent of enrollees in 2014 chose the lowest or second-lowest cost plan in their tier.

In addition, the risk stabilization programs, which include risk adjustment, risk corridors, and reinsurance, diminish insurers’ risk of financial losses and allow them to price their plans more aggressively. The temporary risk corridor program limits both gains and losses of insurers participating in the marketplace and the temporary reinsurance program provides stop-loss coverage when claims expenses for an individual exceed a specified amount. The permanent risk adjustment program transfers funds from insurers with lower-risk patients to those with higher-risk patients.

The appeal of the marketplace structure and risk stabilization programs have, in turn, led to the increase in insurer participation, which also helps to contain costs.

An outstanding question, however, is the long-term sustainability of current trends in premiums. Similar to employer-based insurance, long-run developments in marketplace premiums will follow trends in medical claims expenses per capita. With the exception of the mid-1990s, the era of restrictive managed care, claims expenses have historically increased at 5 percent or more per year (see Appendix). Future price increases of marketplace plans will depend on how effectively America reforms the delivery of care and moves from a system that rewards high volume to one that rewards high-quality care.

See the appendix for the study methodology.