In March, the Obama administration released guidance extending the renewal of health insurance policies that do not meet the Affordable Care Act’s (ACA) coverage standards through October 1, 2016. This means that health policies that exist today, but do not comply with ACA protections that went into effect in 2014, can be maintained through 2017.

President Obama originally announced the transitional policy fix last November. States and insurers were encouraged—but not required—to allow people to reenroll in and even renew these plans after January 1, 2014. Initially, the administration limited the policy to allow renewals of noncompliant individual and small-group policies through October 1, 2014.

State Decision on the Extensions
In a blog post published soon after the administration’s initial guidance, we noted that many states chose not to allow insurers to renew noncompliant policies after January 1, 2014. For the most part, these were states that are running their own health insurance marketplaces and were predictably hesitant to adopt a policy that could undermine these fledgling programs. Most of these states have maintained their original position, even after the administration extended the transitional policy fix by two years. These states include California, Connecticut, Delaware, Maryland, Massachusetts, Minnesota, Nevada, New York, Rhode Island, Vermont, and Washington as well as Washington, D.C.

However, at least 11 states that did not adopt the administration’s original transitional policy—Alaska, Arizona, Arkansas, California, Colorado, Indiana, Nebraska, Oklahoma, Oregon, Virginia, and West Virginia—are now allowing renewals of noncompliant policies after January 1, 2014, although California has limited them to the small group market; renewals are still prohibited in the individual market.

These states will join the 29 states that adopted the administration’s original transitional policy. Most of these states have a federally operated marketplace and had already allowed plans to renew early, prior to 2014. 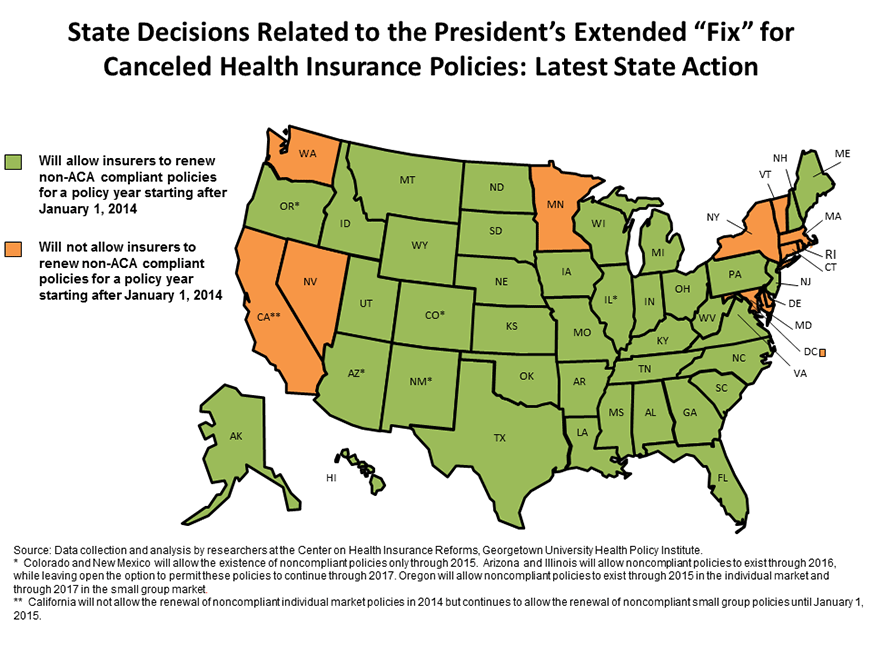 Why It Matters
An American Academy of Actuaries issue brief points to the renewal of noncompliant policies, at least in the states that adopted the transitional policy, as a factor driving higher premium rates in 2015. This is because healthier people were more likely to remain enrolled in those policies, making the risk pool for new, ACA-compliant plans sicker than insurers originally projected. However, the rating impact of transitional policies is just one of many factors contributing to the 2015 rates, some of which will drive rates higher and some of which will push rates down. While we don’t yet have a clear picture of the impact of the transitional policy on premiums, a recent Commonwealth Fund analysis suggests that the effect could be fairly small.

The continued existence of noncompliant policies may have the greatest negative impact on the small-group market, and the Small Business Health Options Program (SHOP) marketplaces in particular. Early anecdotal reports suggest that a significant number of small employers chose to renew their existing coverage prior to the availability of the SHOP. If this trend continues through 2017, it may not only affect premiums for compliant small-group policies, but also demand for SHOP coverage.

The transitional policy has another serious consequence. At its core, the Affordable Care Act is designed to remedy shortcomings in individual and small-group market coverage such as preexisting condition coverage exclusions, the use of health status and gender to set premiums, and the lack of a minimum set of core health benefits. The decision to allow noncompliant policies to continue means insurers may delay these critical reforms for up to 36 months in policies covering millions of Americans.