Under President Obama’s transitional policy fix for people whose health insurance plans were canceled, states and insurers are encouraged, but not required, to allow people to reenroll in and even renew these plans. This means that health plans that exist today, but do not comply with the Affordable Care Act’s new protections set to go into effect in 2014, could extend through 2015. Separate from this transitional policy fix, the Administration announced a further clarification to exempt consumers whose policies will not be renewed from the penalty for not having health insurance. These consumers will be eligible to purchase a catastrophic plan, which has the highest level of cost-sharing and is typically available only for those under age 30.

States and insurance companies are primarily responsible for executing the transitional policy fix, which comes at a time when stakeholders have undertaken significant efforts to prepare for new changes beginning in 2014. Many of the states that have decided not to adopt the policy fix are those most invested in the success of the law. 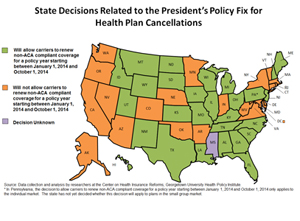 State decisions on the transitional policy fix. To date, states such as Alaska, Arizona, Arkansas, California, Colorado, Connecticut, Delaware, Indiana, Maryland, Massachusetts, Minnesota, Nebraska, Nevada, New York, Oklahoma, Oregon, Rhode Island, Vermont, Virginia, Washington, and West Virginia, as well as Washington, D.C., have publicly announced that they will not implement the transitional policy fix. Although some of these states allowed insurers to reinstate canceled policies until December 31, 2013, insurers in these states are not permitted to renew policies that do not comply with the Affordable Care Act after January 1, 2014.

Of these, the states running their own state-based health insurance marketplace were among the quickest to reach a decision. For the past three years, these states have overcome numerous challenges to build and launch a marketplace and have made critical policy decisions to ensure that their exchanges will thrive. In California, Minnesota, and Washington, for example, state officials declined to adopt the transitional policy fix, citing concerns that included administrative obstacles, consumer confusion, and a potential increase in premiums in 2015.

Not all states are rejecting the president’s proposal, particularly those where the federal government is operating the exchange. To date, Alabama, Florida, Georgia, Kansas, Illinois, Iowa, Louisiana, Maine, Michigan, Missouri, Montana, New Hampshire, New Jersey, North Carolina, North Dakota, Ohio, Pennsylvania,1 South Carolina, South Dakota, Tennessee, Texas, Utah, Wisconsin, and Wyoming are allowing people with canceled policies to renew in 2014. Hawaii, Idaho, Kentucky, and New Mexico, all operating their own marketplaces, also adopted the fix. These states had already allowed the early renewal of policies, which is consistent with the president’s fix.

Effect of state law on decisions. Along with concerns about the success of the marketplaces, a key consideration for state officials is whether they have the legal authority to allow or prohibit the transitional policy fix. As noted in a previous post, some states had already taken regulatory action or interpreted existing law to allow or prohibit “early renewals,” or the renewal of coverage that doesn’t meet the Affordable Care Act’s standards prior to December 31, 2013.

Many states also passed their own laws applying some or all of the Affordable Care Act’s market reforms to coverage issued or renewed in their state on or after January 1, 2014. These market reforms include the coverage of a minimum set of essential health benefits and the ban on preexisting condition exclusions.

The existence of such laws may mean that regulators are unable to allow renewals in 2014. Although federal regulators will not enforce the market reforms for plans in the individual market that are renewed in 2014, state regulators may not have the same flexibility. Maryland, for example, noted that renewals will not be permitted after January 1, 2014, because plans would “not comply with federal and state laws.” State officials in California and Nevada suggested the same.

In states that adopt the transitional policy fix but passed new legislation on one or more of the market reforms, such as Maine, it is unclear how regulators will apply rules that no longer exist. The lack of formal rules could lead to questions about which standards apply to renewal coverage and, at worst, a regulatory vacuum.

As we have seen throughout implementation of the ACA’s insurance market reforms, the rubber meets the road in the states. Whether the transitional policy fix meets its stated goals and allows consumers to keep their policies with minimal market disruption largely depends on the decisions—and legal authority—of state officials and whether insurers voluntarily decide to reissue canceled policies. Where consumers are not offered the benefit of the transitional policy fix, they will still be eligible to purchase any other policy offered in the individual market, including a catastrophic plan.

1 In Pennsylvania, the decision to allow carriers to renew non-ACA compliant coverage for a policy year starting between January 1, 2014 and October 1, 2014 applies only to the individual market.

The authors thank Ashley Williams for her valuable research assistance.

History in the Balance: The Promise of Build Back Better