Marketplace Premiums Decline in Colorado and Connecticut, Rise in Minnesota and Vermont

Next month, the Affordable Care Act health insurance marketplaces will open for enrollment for coverage in 2015. With support from The Commonwealth Fund, NORC at the University of Chicago is building a national database of plans offered on the marketplaces, including data on premiums, deductibles, out-of-pocket limits, and other elements of benefit designs at all levels. In this series of blog posts and an interactive map, we are reporting this information for marketplaces operated by states as it becomes available. Next month, the U.S. Department for Health and Human Services will post benefit and cost information for marketplaces operated by the federal government.

Health plans are offered through the marketplaces at four levels—bronze, silver, gold, and platinum—with bronze plans being the least generous and platinum plans the most. Premium subsidies for eligible individuals are based on the cost of the second least-expensive silver “benchmark” plan. Moreover, those earning up to 250 percent of the federal poverty level in 2015 ($29,175 for an individual and $59,625 for a family of four) are eligible for cost-sharing reductions, but only if they enroll in a silver plan. People with cost-sharing reductions have a plan similar to a gold or platinum plan.

This is the third in a series of blog posts about premium and benefit changes for individual insurance plans. The states reviewed are Colorado, Connecticut, Minnesota, and Vermont. (See our previous post for Maryland and Washington State rates.) The sample within each state includes one urban, one suburban/small city, and one rural area, though Vermont has only one rating area.

We found that, from 2014 to 2015, average premiums decreased substantially in Colorado, declined slightly in Connecticut, rose substantially in Minnesota, and increased more modestly in Vermont. In Colorado and Connecticut, more carriers joined the marketplaces and more plans became available, whereas the carrier with the largest enrollment left the Minnesota marketplace. 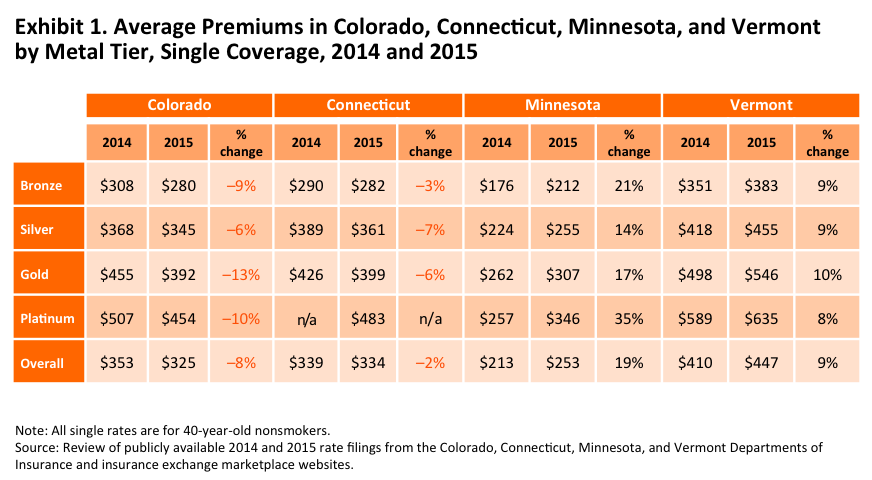 The average premium for the Colorado benchmark plans declined substantially in all three study rating areas—by an average of 18 percent. The statewide average declined from $263 in 2014 to $215 in 2015 (Exhibit 4). As a result, households eligible for subsidies may need to switch to the new benchmark silver plan to ensure their premium does not increase. The cost to the federal government of subsidies in Colorado per person will decline next year as a result of the lower price for its benchmark silver plan.

In 2015 the average deductible for all plans in Colorado is $3,476 with the silver plans averaging $2,587. Deductibles, out-of-pocket limits, and copayments for primary care office visits changed little from 2014–2015 (Exhibit 3). 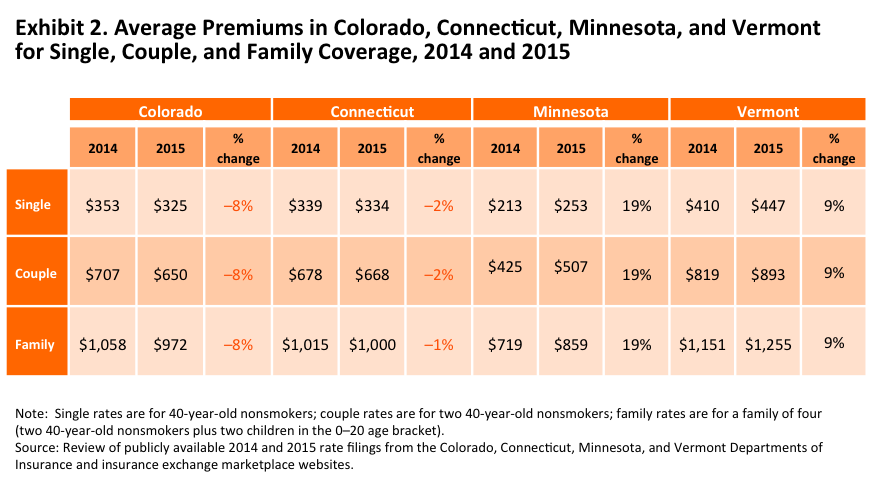 The average premium for the benchmark plans decreased in all three rating areas. The statewide average declined by 13 percent—from $387 in 2014 to $335 in 2015. The cost of federal subsidies in Connecticut will therefore decline next year, and households receiving subsidies may need to switch plans to make certain they do not pay higher premiums. 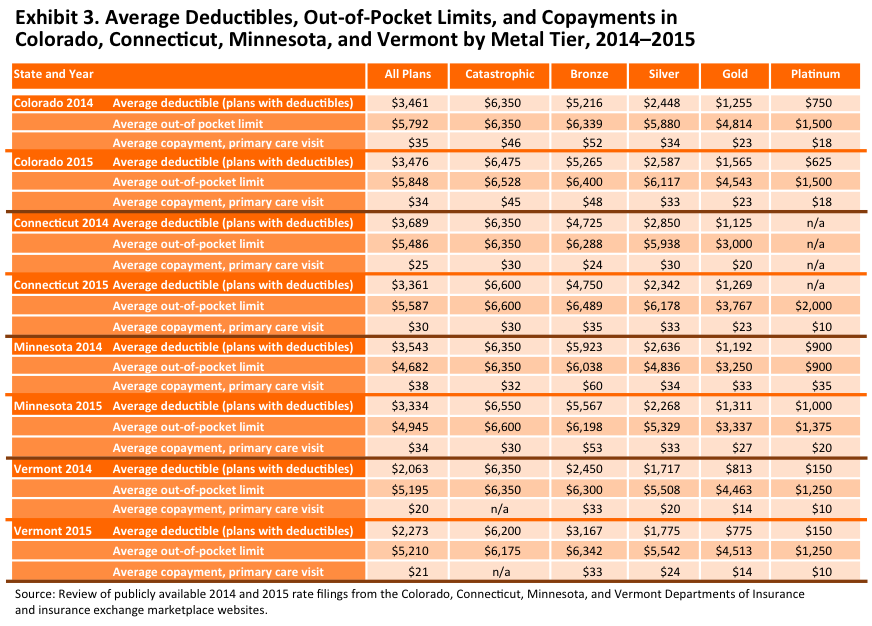 The average deductible in 2015 for all Connecticut marketplace plans is $3,361 with the silver plan averaging $2,342. Deductibles on average are less in 2015 than in 2014 while the average copayment for a primary care office visit increased from $25 to $30.

The average premium for the benchmark plans increased by 14 percent, from $171 to $196. The cost to the federal government per person will rise significantly in 2015 in Minnesota. Nonetheless, Minnesota remains one of the lowest-cost states in the nation.

Premiums for the benchmark plans increased from $413 to $436—a 6 percent increase—so the per capita cost to the federal government will rise in 2015.

The average deductible in Vermont in 2015 is $1,770, with the silver plan’s averaging $1,812. Deductibles and copayments in Vermont are less than in the three other states.

Data for this project are drawn from a variety of sources. For summaries of benefits and coverage, data in states that run their own marketplaces are from publicly available rate filings from state Departments of Insurance, marketplace, and/or carrier websites.  Readers may find a more complete description for study methods including weighting methods in this PDF.