Next month, the Affordable Care Act health insurance marketplaces will open for enrollment for coverage in 2015. Current enrollees will either need to renew their plans or shop for new coverage, while those seeking coverage for the first time will have a three-month window in which to explore provider networks, benefit designs, and costs.

With support from The Commonwealth Fund, NORC at the University of Chicago is building a national database of plans offered on the marketplaces, including data on premiums, deductibles, out-of-pocket limits, and other elements of benefit designs at all levels. In this series of blog posts and an interactive map, we will report this information for marketplaces operated by states as it becomes available. Next month, the Department for Health and Human Services will post benefit and cost information for marketplaces operated by the federal government.

This post reports on premium changes for individual insurance plans in Washington and Maryland, among the first two states to post final rates for marketplace plans. From 2014 to 2015, average premiums decreased in Washington and increased slightly in Maryland. In both states more carriers joined the marketplaces and more plans became available.

Health plans are offered through the marketplaces at four levels—bronze, silver, gold, and platinum—with bronze plans being the least generous and platinum plans the most. Premium subsidies for eligible individuals are based on the cost of the second least-expensive silver “benchmark” plan. Moreover, those earning up to 250 percent of the federal poverty level in 2015 ($29,175 for an individual and $59,625 for a family of four) are eligible for cost-sharing reductions, but only if they enroll in a silver plan. 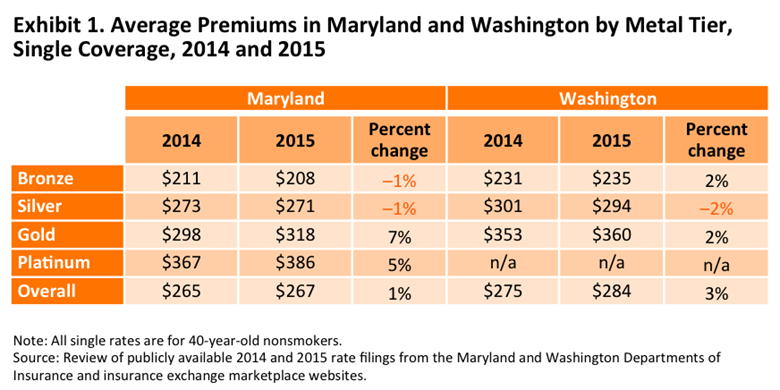 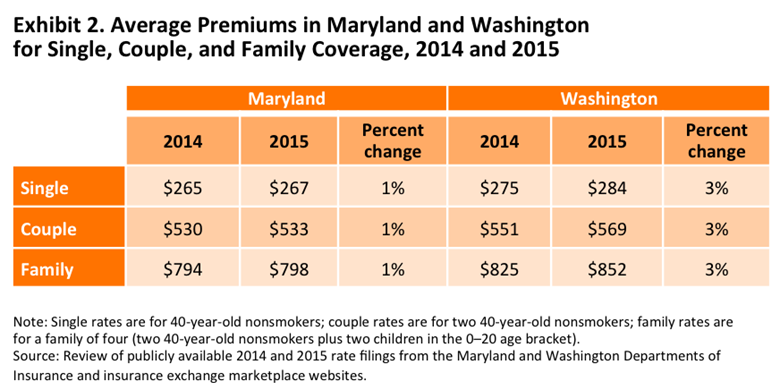 For the second least-expensive silver plan in our sample—the benchmark plan for determining federal subsidies—the 2014 monthly premium for single coverage ranged from $281 to $289 across our three sampled regions, and will drop to $254 to $270 for 2015. Because a state’s benchmark plan may change in 2015, those eligible for subsidies may need to switch to the new benchmark silver plan to ensure their premium does not increase. The cost to the federal government of subsidies in Washington could decline next year as a result of the lower price for its benchmark silver plan.

Using plan-level enrollment data provided by Washington for 2014, NORC determined that an enrollee renewing the same plan in 2015 would pay, on average, an additional $7 monthly for single coverage, a 2.6 percent increase over 2014. However, marketplace consumers are highly price-sensitive and will likely move to lower-cost plans. Therefore this premium increase should be viewed as a top figure: as consumers shift to lower-cost plans in 2015, the average premiums for purchased plans is likely to be lower.

One factor behind these modest premium increases may be that new carriers entered the marketplaces in both states, fueling competition among plans. In Washington, one carrier, Moda Health, entered the market, and two, BridgeSpan and  Coordinated Care, increased their plan offerings more than threefold. On the whole, the number of silver and gold plans offered nearly doubled from 2014 to 2015. In Maryland, three carriers—Cigna, United Healthcare, and Carefirst (GMSHI)—entered the marketplace.

The modest premium increases for 2015 are consistent with other recent findings. For example, the Kaiser Family Foundation/HRET Annual Employer Health Benefits Survey reported average family premiums for employer-sponsored plans increased just 3 percent from 2013 to 2014. Moreover, the Kaiser Family Foundation recently reported that from a sample of urban areas in 16 states, the average price of the second-lowest silver individual marketplace plan declined by 0.8 percent.