A provision in the Affordable Care Act that could have a strong impact on small and mid-sized employers is starting to draw some public attention. Historically, states have defined their small-group markets as groups of two to 50 employees. However, beginning January 1, 2016, the Affordable Care Act expands the definition of “small employer” to mean a business that employs between two and 100 employees.

Experts fear this change could result in premium increases for some mid-sized employers with between 51 and 100 employees, which are currently included in the large-group market, because they will become newly subject to several small-group market reforms. These include new rating rules such as not charging people more for preexisting conditions and the requirement to cover a minimum set of essential health benefits. As a result, some policymakers and others have called for the delay or repeal of this provision.

While it is unlikely that the Obama Administration will unilaterally delay this requirement, it does have a transitional policy for mid-sized employers. Under this policy, states can decide whether to permit mid-sized groups to remain part of the large-group market for up to two more years, and thus be exempt from the small-group market reforms. Not surprisingly, states are dealing with this challenge in different ways.

In a previous post, we outlined state decisions on whether to allow the renewal of insurance policies that were not compliant with ACA benefit standards in the individual and small-group markets; all but 11 allowed it. Here we identify states that are using this transitional policy to allow plans offered in the mid-sized employer market to stay in the large-group market (Exhibit 1). 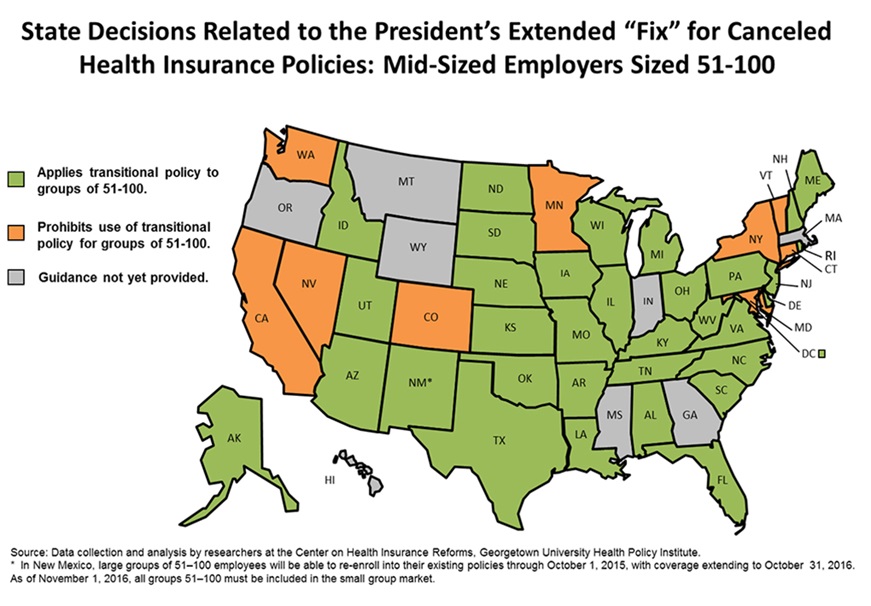 To date, 34 states have issued guidance allowing mid-sized employers to remain in the large-group market for up to two years.1   Of these, Delaware, Rhode Island, and Washington, D.C., do not permit the renewal of noncompliant plans in the individual and small-group markets but are now allowing mid-sized companies to do so.

Not all states will permit transitional relief for mid-sized employers. Nine states—California, Colorado, Connecticut, Maryland, Minnesota, Nevada, New York, Vermont, and Washington—continue to prohibit noncompliant policies across all markets, while eight states have not yet provided publicly available guidance to insurers.2

Many states are acting out of concern that an expansion of the small-group market to groups of up to 100 employees could lead to significant market disruption, including premium increases for employers with young or healthy groups. This in turn could give some employers an incentive to self-insure or even drop employee coverage. If too many young, healthy groups leave the market, adverse selection could cause premiums to increase for the employers that remain.

However, the administration’s transitional policy carries risks if insurers decide to keep only their healthier groups of mid-sized employers outside the small-group market. Some states have issued formal guidance on the transitional policy to prevent this from occurring. For example, Delaware, Maine, Michigan, South Carolina, Utah, and Washington, D.C., allow insurers to offer transitional relief to large-employer health benefit plans, but they must make the offer uniformly to all eligible employers, regardless of the health status, age, or gender of employees.

While most states are moving to stabilize their markets and guard against potential adverse selection, their actions are not long-term solutions. It is also not clear that the administration can do more than it has already done through its transitional policy. Ultimately, it is Congress that has clear authority to repeal or further delay this provision of the Affordable Care Act.

1 In New Mexico, large groups of 51–100 employees will be able to reenroll into their existing policies through October 1, 2016, with coverage extending to December 31, 2016. As of January 1, 2017, all groups of 51–100 employees must be included in the small-group market.
2 While eight states have not yet provided publicly available guidance to issuers, five states—Indiana, Massachusetts, Mississippi, Montana, and Oregon—have indicated that guidance is forthcoming.