The Affordable Care Act (ACA) aims to increase the number of Americans with health coverage by expanding access to Medicaid and establishing marketplaces where people can compare private plans and, if eligible, receive premium and cost-sharing subsidies. Partly to reduce the law’s fiscal impact, the ACA encourages workers with access to employer-provided coverage to retain that coverage by restricting their eligibility for marketplace subsidies. This “affordability firewall” means that all members of a family are ineligible for subsidies if at least one member has access to employer-provided insurance in which his or her contribution for a single premium is less than 9.56 percent of household income.

Because of the firewall, many families whose incomes would make them eligible for subsidies for marketplace plans are penalized for having access to employer coverage. Even though their required contribution for an employer family plan may be substantially higher than the contribution for a single plan, these families do not qualify for marketplace subsidies. In contrast, families that are eligible for subsidies in the marketplaces pay no more than 9.56 percent of their income for a family premium if they enroll in benchmark coverage, and many will pay considerably less, depending on their income. Figure 1 illustrates this difference by comparing premium contributions for two families of the same size and income.1

Sen. Al Franken (D-Minn.) proposed a modification to the firewall that would allow dependents to receive subsidies—but not the worker—when the family employer premium contribution exceeds 9.56 percent of the worker’s household income.3  We estimated the changes this modification would bring about in coverage, federal spending, and family out-of-pocket spending. To conduct this analysis we used the COMPARE microsimulation, a health economic model developed by RAND.

Figure 2. Projected Health Insurance Coverage Changes in 2017 Under the ACA and Under the Proposed Modification to the Affordability Firewall 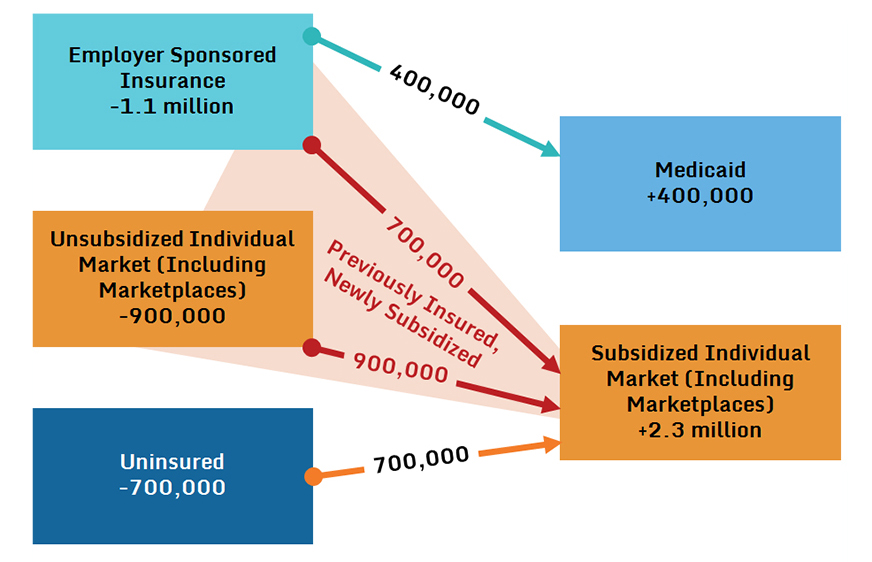 We also considered the impact of this policy change on government spending and revenue, accounting for increases in marketplace subsidies and Medicaid spending, decreases in uncompensated care, decreases in individual mandate revenue from the uninsured, and increases in tax revenue due to increased wages that may occur if employers’ spending on health insurance declines. The net impact under the policy change is an increase of $3.9 billion in federal spending relative to what the government is expected to spend under current ACA policy.

We project that by spending about $1,700 per newly subsidized individual the government would extend insurance to another 700,000 people and substantially reduce health care spending for 1.6 million individuals who are insured but face high health care costs under current ACA policy.

This post is part of a series analyzing proposals that seek to change provisions in the ACA.

1According to the most recent Kaiser Family Foundation/Health Research and Educational Trust annual survey of employer benefits, the average worker contributes $1,071 annually for single coverage, and $4,955 annually for family coverage. See this survey at http://kff.org/health-costs/report/2015-employer-health-benefits-survey/ (Last accessed 10/09/15).

2The $4,955 estimate from the Kaiser survey represents the average employer contribution across all family sizes and income levels. In contrast, the $3,075 figure represents the maximum potential marketplace spending for a family of four at 200 percent of the federal poverty level, assuming the family decides to enroll in a benchmark silver plan.

5We also estimated that enrollment in Medicaid and the Children’s Health Insurance Program) would increase by 400,000 as explained in the full report.

6Average out-of-pocket spending refers to how much one of these individuals spends on average on health care in a year in cost sharing at the point of service. It includes copayments and deductibles, but not premium contributions. Average total health care spending refers to the annual total cost of health care for one of these individuals, taking into account all sources of coverage. These sources are the employer (if under employer coverage) or the federal government (if under subsidized marketplace coverage) and the individual or the individual’s family. Average total health care spending includes both out-of-pocket spending and premium contributions.

7Note that not all family members become newly subsidized. In particular, if a worker’s single employer-sponsored insurance (ESI) contribution is affordable, he or she will be ineligible to receive marketplace subsidies while the rest of the family becomes eligible based on the cost of a family ESI plan. Similarly, any family members eligible for CHIP or Medicaid will remain ineligible for marketplace subsidies.

8This dollar figure is arrived at by dividing the increase in federal spending ($3.9 billion) by the total number of newly subsidized (2.3 million individuals). The modification will also benefit workers with access to employer coverage since they would be paying single premiums instead of family premiums.