States of Despair: A Closer Look at Rising State Death Rates from Drugs, Alcohol, and Suicide

The opioid crisis has helped fuel a 51 percent increase in the combined death rate from drug overdoses, alcohol abuse, and suicide between 2005 and 2016

In late June, the U.S. House of Representatives overwhelmingly approved the most sweeping legislation yet aimed at combating opioid addiction and overdoses. Although the House bill has a ways to go before it becomes law, its passage reflected bipartisan cooperation, likely propelled by the depth of the problem. The opioid crisis has helped fuel a 51 percent increase in the combined death rate from drug overdoses, alcohol abuse, or suicide between 2005 and 2016.

The increased mortality from these causes has contributed to a decline in the average life expectancy at birth in the United States for two years running. Moreover, preliminary mortality data for 2017 released by the Centers for Disease Control and Prevention suggest a third consecutive year of decline in U.S. average life expectancy may be in the offing — something not seen since the years encompassing the worldwide “Spanish flu” epidemic in 1918.1

In May, the Commonwealth Fund’s 2018 Scorecard on State Health System Performance reported the combined death rate per 100,000 people from drug or alcohol use or suicide, in all 50 states and Washington, D.C., as well as for the nation.2 Here, we look more closely at how the rates of these deaths — which Princeton economists Anne Case and Angus Deaton have dubbed “deaths of despair”— have changed across states over time. We compare rates in 2005, when the opioid crisis was under way but not yet making headlines, to 2016, the most recent year that data are available.

We find that drug overdose deaths drove the overall spike in death from drugs, alcohol, or suicide by more than doubling over the 11-year period. While drug deaths were the smallest contributor to deaths of despair in 2005, they were by far the largest in 2016. By comparison, rates of deaths from suicides and alcohol were roughly 25 percent higher in 2016 than in 2005. 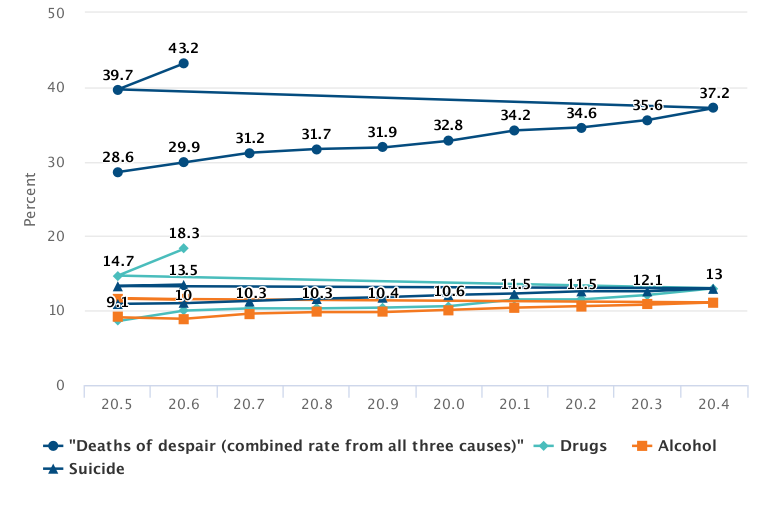 All States Impacted, but Not Equally

The rate of deaths of despair increased in every state and the District of Columbia between 2005 and 2016. In 2005, only four states had rates above 40 per 100,000 people. By 2016, nearly three-fourths of states and the District of Columbia did (see Appendix Table). Yet the threefold difference between the lowest and highest state rates in both 2005 and in 2016, and the differences among states in the extent of the increase seen over those 11 years, make clear that some states have been hit worse than others.

West Virginia stands out among states as having the highest combined rate of deaths from drugs, alcohol, or suicide in 2016 (83.1 deaths per 100,000 population) as well the largest increase in deaths from these causes since 2005. The rate of drug overdose deaths in West Virginia more than quintupled between 2005 and 2016, while the state’s suicide rate increased by 46 percent and deaths from alcohol abuse rose by 41 percent. New Hampshire and Ohio had, respectively, the second- and third-largest increases in the rate of deaths of despair over the 11-year period. In both states the rate of drug deaths approximately quadrupled, and in New Hampshire, the suicide rate rose sharply as well.

Even in states that had among the lowest increases in rates of deaths of despair — California, Mississippi, and Texas — the upturn was still substantial, rising 18 percent to 19 percent from 2005 to 2016. 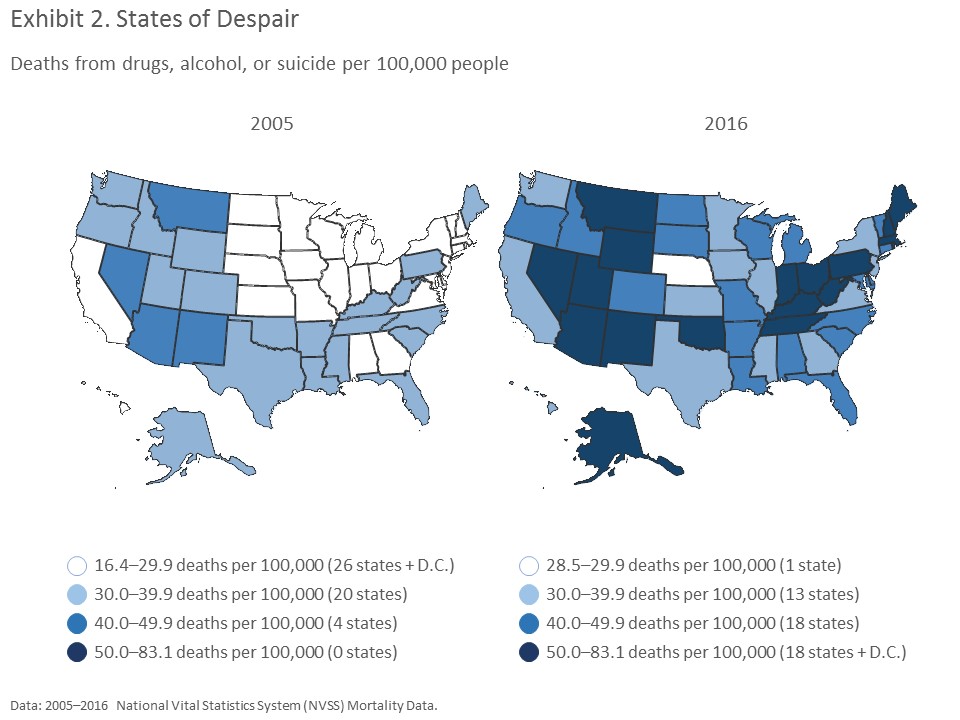 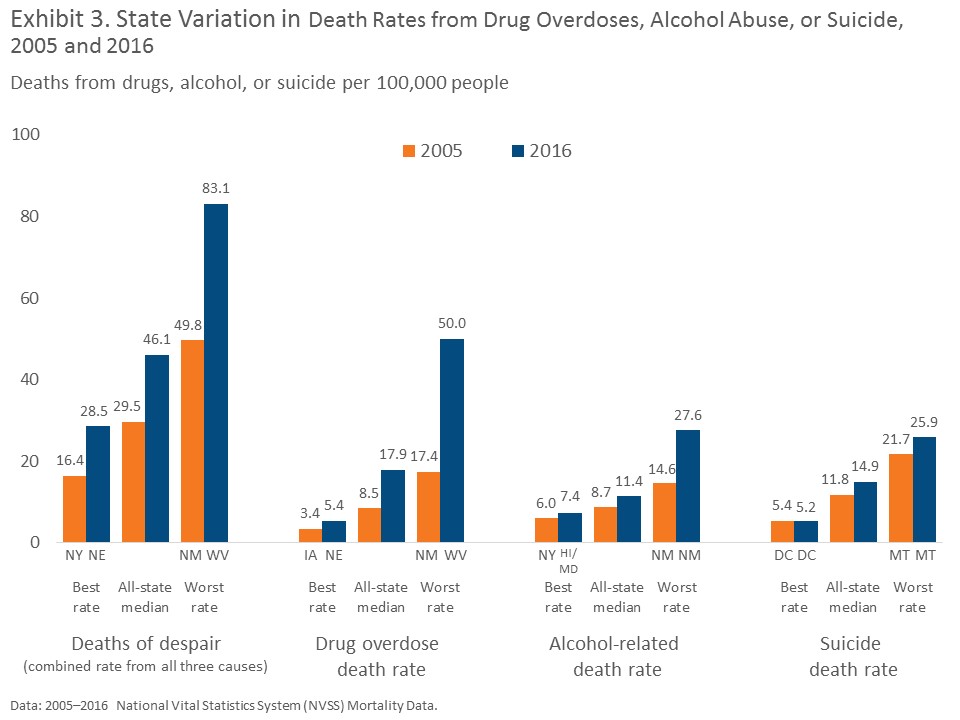 State efforts to counter the surge in drug overdose deaths include improving access to life-saving opioid overdose reversal medications such as Naloxone, passing legislation that sets guidelines or limits for opioid prescriptions, and implementing Medicaid health home models that offer integrated services to treat and address the needs of patients with opioid use disorder. But there is still much more work to do in both preventing and treating addictions, and in responding more effectively to overdoses.

This will require better access to addiction services. In 2016, only about 10.6 percent of adolescents and adults who needed substance use treatment received it that year at a specialty facility such as hospital or drug or alcohol rehabilitation center, where staff are prepared to provide ongoing addiction treatment. (Most primary care practices are not currently equipped to treat addiction.) The increase in rates of deaths from suicides highlight the need for greater access to mental health services for severely depressed and suicidal patients. As the 2018 Scorecard reported, fewer than half of U.S. adults with symptoms of a mental illness — some of whom may not have been diagnosed — received treatment in the past 12 months, based on combined 2013 and 2015 National Survey of Drug Use and Health data.

The situation would be worse without the Affordable Care Act, which made mental health and substance use treatment an essential health benefit that most insurance plans must cover. In states that choose to expand Medicaid, the program covers these benefits for newly eligible enrollees. For example, in Kentucky, which expanded Medicaid in January 2014, the number of treatment services for substance use for Medicaid expansion enrollees climbed from about 1,500 in the first quarter of 2014 to more than 11,000 by the second quarter of 2016. And in Kentucky, as well as several other expansion states including West Virginia and Ohio, Medicaid pays for between a third and half of prescriptions for medication-assisted therapies that combat opioid use disorders.3

One state that has developed a successful strategy for expanding access to opioid addiction treatment is Vermont. To reduce long waiting lists for treatment at specialty facilities, Vermont launched the “Hub-and-Spoke” model in 2013. In Vermont’s approach, nine specialized drug treatment centers (the “hubs”) serve the most clinically complex patients, while more than 75 local primary care offices (the “spokes”) provide medication-assisted treatment to less complex patients.4 From the program’s inception through March 2017, the number of providers in the state willing to offer medication-assisted treatment for addiction nearly doubled, from 114 to 196. The model has shown sufficient enough promise that California and Pennsylvania are replicating it.

The recently passed House bill aims to further help states by freeing up Medicaid funds to cover opioid addiction treatment at more in-patient facilities, expanding access to medication-assisted therapies, and promoting the use of nonopioid painkillers. Yet reversing the upward trend in deaths of despair will likely require even greater cooperation and engagement, not only among policymakers but across sectors, including the health system, social service sector, and the criminal justice system.

We define deaths of despair, and each component, using the methods first introduced by Case and Deaton with a slight modification that groups X45 and Y15 are defined as alcohol-related deaths as opposed to drug-related poisonings. Others have reported on drug related deaths using slightly different ICD-10 code groupings. The CDC, for example, reported drug-related deaths including ICD-10 codes that our approach considers to be suicides, yet both methods produce similar rates.

2 Note that some deaths coded on death certificates as drug overdoses may, in fact, be suicides. See Martha Bebinger, “Suicide Emerges in Understanding the Opioid Epidemic,” WBUR, Jan. 9, 2018.

3 Kentucky’s approved Medicaid waiver to expand the substance use disorder treatment options available to beneficiaries is unaffected by the recent federal court ruling that blocked the state from requiring work or community service in exchange for coverage. 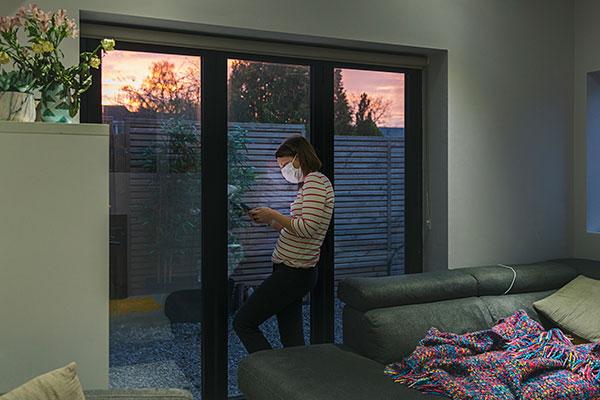