Firefighters and paramedics with Anne Arundel County Fire Department transport a patient after responding to a call for a cardiac arrest as a result of a drug overdose on May 6, 2020, in Brooklyn, Md. Recently released data by the CDC show that drug overdose deaths reached a record high of 93,331 in 2020 amid the COVID-19 pandemic. Photo: Alex Edelman/AFP via Getty Images

The emergence of COVID-19 in early 2020 raised fears that already-rising drug overdose deaths could surge even further amid social isolation, economic stress, and disrupted access to treatment facilities and providers.

Prior research showed that overdose deaths immediately spiked to previously unseen levels after the pandemic hit in March 2020 and stayed elevated through the summer. Provisional data (see Data and Methods) from the Centers for Disease Control and Prevention (CDC) now provide a more comprehensive look at the full overdose toll in 2020.

Recently released data by the CDC show that drug overdose deaths reached a record high of 93,331 in 2020. While these estimates are not final, this is more than 20,000 deaths above the previous high in 2019 and the largest single-year percentage increase on record since 1999. Since 2015 the percentage of all U.S. deaths attributed to overdoses has grown from 1.9 percent to 2.8 percent, even as COVID-19 increased total deaths by more than 300,000 in 2020. 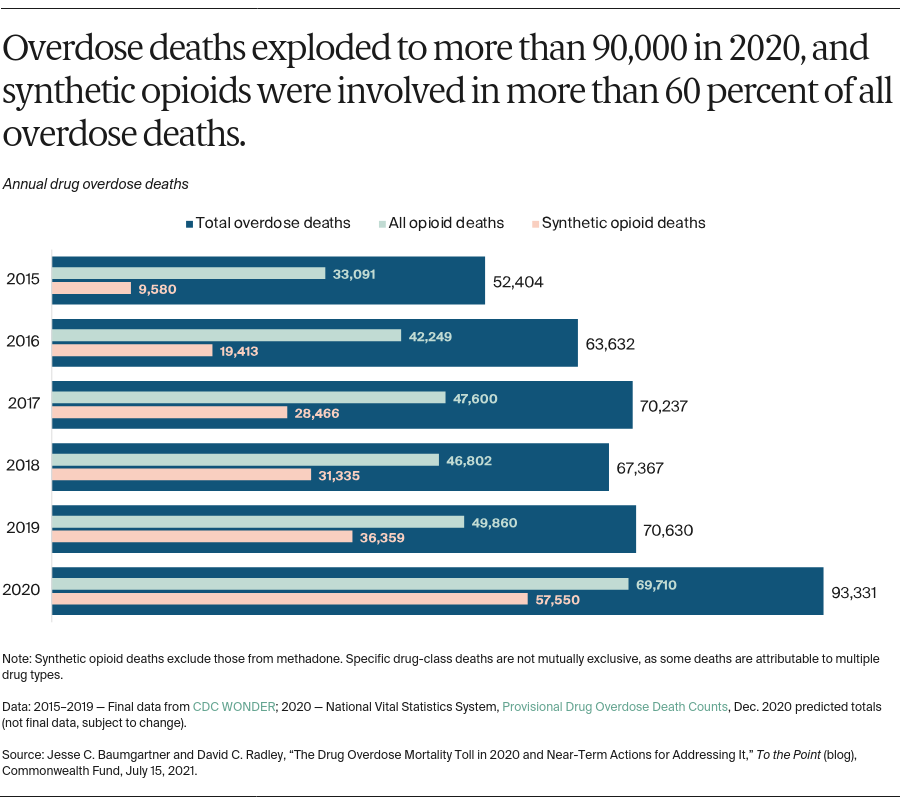 Deaths related to synthetic opioids played a large role in these explosive increases. Prepandemic research documented the rapid and deadly growth of fentanyl within the drug supply, including in combination with drugs like cocaine and methamphetamine. Researchers have pointed to elevated drug use and higher-risk usage — such as cutting or mixing drugs from an unreliable supply and using in isolation — as potential factors in the pandemic’s deadly surge.

The new CDC data show that deaths at least partially attributable to synthetic opioids likely increased by around 20,000 (54%) in 2020, while deaths involving cocaine (21%) and other psychostimulants like methamphetamine (46%) also rose dramatically. In 2015, synthetic opioids were involved in only 18 percent of all overdose deaths; in 2020, it appears to be more than 60 percent. 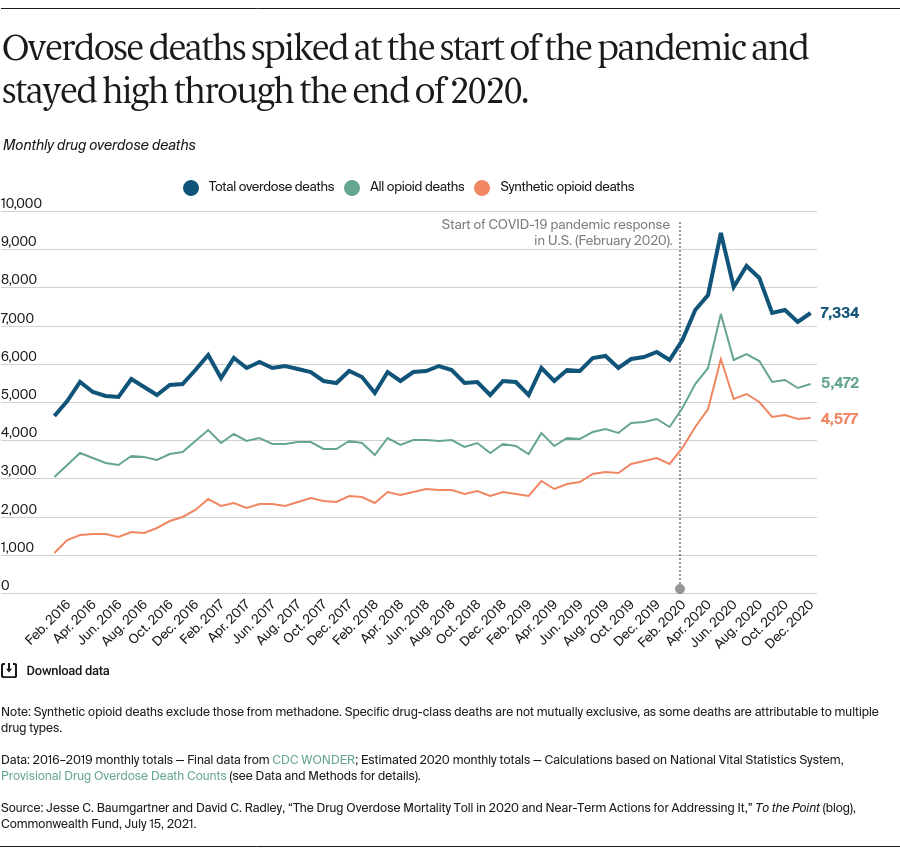 All Regions and Communities Affected by Spike in Overdose Deaths

The explosion of overdose deaths during COVID-19 has left no region or community within the country untouched. 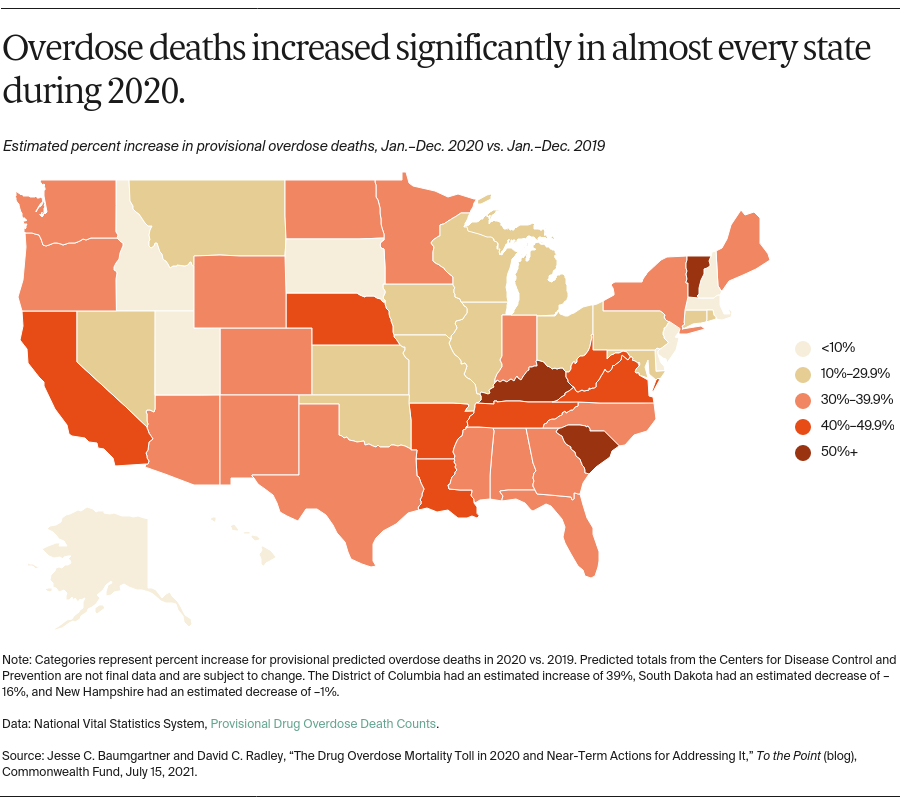 The CDC’s latest data show that 28 states had more than a 30 percent increase in overdose deaths in 2020 compared to 2019, including 10 that increased by more than 40 percent.

These increases were not confined to areas often associated with the opioid epidemic such as West Virginia and Kentucky. California, Colorado, Washington State, and Wyoming all show increases above 35 percent. Nine of the top 15 increases occurred in Southern or Appalachian states. 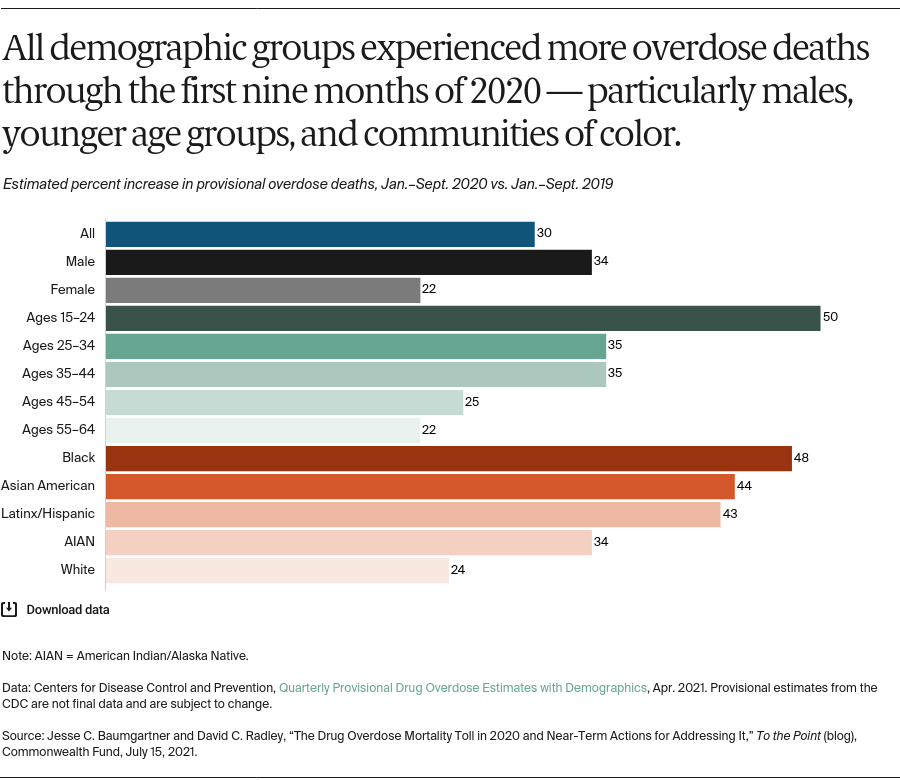 In August 2021, the CDC also released provisional demographic data for overdose deaths through December 2020. These estimates indicate that during 2020, overdose deaths rose dramatically for nearly every racial/ethnic group and age range.

The country is facing an urgent drug epidemic that worsened during the pandemic. A multitude of policy and treatment options can help reduce further loss of life.

To start, the federal government has allocated billions of dollars for substance use disorder (SUD) programs in recent spending bills. This can remove the excessive financial burden that falls on state and local governments to fund such programs. Congress also provided incentives to encourage the 13 states that have not yet expanded Medicaid to do so. Medicaid covers a significant percentage of substance-use patients and has been shown to improve treatment access and outcomes.

During the pandemic, regulatory flexibility for prescribing SUD treatments like buprenorphine and methadone, which normally require in-person clinic or facility visits, helped mitigate disruptions to effective treatment. Federal regulation changes have allowed patients to receive take-home methadone doses and other medication-assisted treatment evaluations and prescriptions via telemedicine. Advocates and policy experts hope to make many of those changes permanent.

Researchers also have called for increasing access to SUD treatment for people of color, who report lower treatment rates and are more likely to be prescribed methadone, which can be a stigmatized and logistically burdensome treatment. More flexible treatment regulations from the federal government combined with targeted efforts by state and local agencies to expand the number and type of buprenorphine prescribers within low-access areas could help address the rapidly growing overdose death toll in those communities.

Finally, on a recent episode of The Dose podcast, Johns Hopkins researcher Brendan Saloner noted the importance of harm-reduction strategies supported by the Biden administration that allow for safer drug use. He also discussed the importance of ensuring continuous access to treatment for justice-involved individuals, among other near-term priorities.

In the second figure, January–December 2020 individual month estimates are based on our calculations using the CDC’s final 2019 monthly data and its 2020 provisional 12-month predicted totals — these estimates are not confirmed by the CDC. To account for the typical overcount in national-level provisional predicted deaths, we discounted the 12-month predicted totals during 2020 by the percentage difference between the final 2019 U.S. annual overdose death total and the December 2019 12-month predicted total (provisional totals are typically around 2.5% higher, depending on the drug overdose death type). Because the CDC’s provisional estimates from previous months can change when a new release comes out, the monthly totals from our March analysis will not match those in the second figure. The trends seen within our monthly totals follow those in a separate set of monthly overdose death estimates released by the CDC’s National Center for Health Statistics (NCHS).

In the fourth exhibit, calculations are based on a table released by the NCHS in August 2021 that provides quarterly provisional drug overdose death estimates from January 2019 to December 2020 for different demographic groups.