How Can the U.S. Catch Up with Other Countries on COVID-19 Vaccination?

People wait to receive a dose of COVID-19 vaccine at the vaccination center in the Parque das Nações in Lisbon on December 1, 2021. European nations, like Portugal and Spain, lead the pack in vaccinating their populations. Photo: Patricia De Melo Moreira/AFP via Getty Images

The United States began 2021 as a leader in COVID-19 vaccinations but has fallen behind dozens of other countries with fewer resources. There is a pressing need to increase vaccination: deaths and hospitalizations are rising again in the U.S. and Europe, almost entirely among unvaccinated people. In this post, we examine the reasons why the U.S. has lagged other high-income countries and how it could catch up.

Which Countries Have Higher Vaccination Rates Than the U.S.?

As of December 13, 2021, 56 percent of the world’s population has received at least one dose of a COVID-19 vaccine. European nations, like Portugal and Spain, lead the pack in vaccinating their populations along with smaller countries like Singapore and the Seychelles. The U.S. was the last high-income country (among 11 countries typically included in the Commonwealth Fund’s International Health Policy Survey) to fully vaccinate at least 60 percent of its population, taking almost a full year to do so. The U.S. is larger than these other countries, but also trails the European Union as whole (68%), as well as other large, federated countries like Australia and Canada. 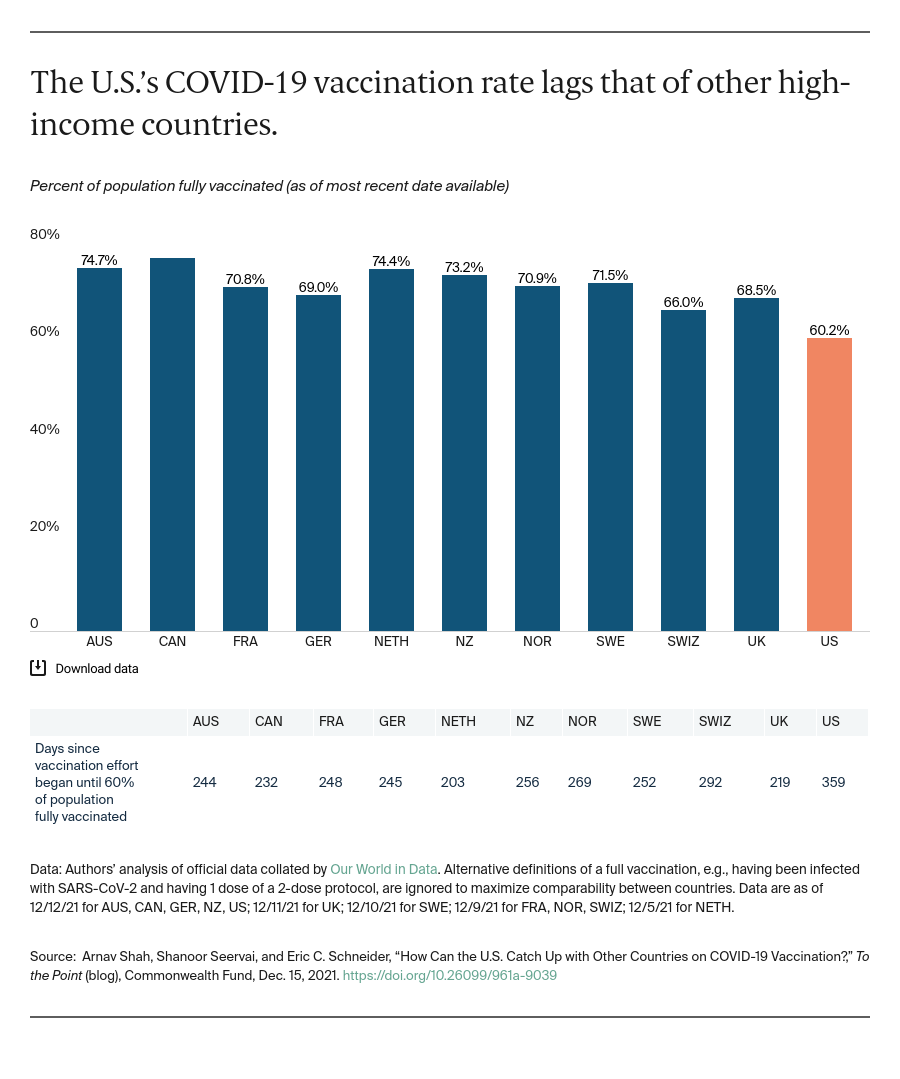 Vaccine trend data show how the pace of vaccination stalled in the U.S. after June. Even Australia and New Zealand, which began their vaccination efforts in the latter half of 2021, surpassed the U.S. by October. The two countries were advocates of the “COVID Zero” strategy of eliminating community transmission through strict lockdowns and closed borders, until a rise in cases because of the Delta variant over the summer pushed leaders to accelerate vaccination efforts. 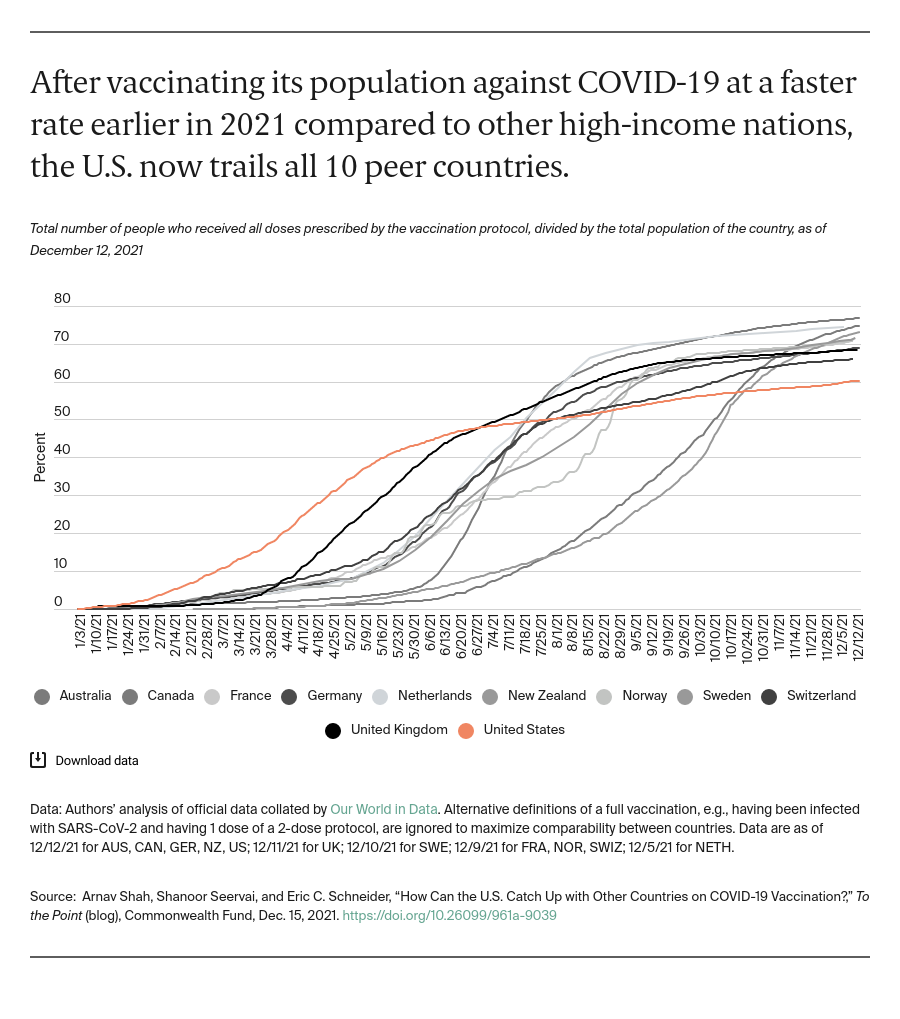 Why Has the U.S. Fallen Behind?

Supply is hardly the challenge in America — the United States invested billions in the accelerated development of COVID-19 vaccines and has more than enough doses for its entire population. Factors like the size of the population, distribution of people across the country, and GDP per capita do not seem to be strong predictors of high vaccination rates. Vaccine hesitancy and resistance have been major factors contributing to slow uptake in America and exist in other countries. Most nations struggle with vaccine protests and misinformation, but many have succeeded in vaccinating a large share of their population.

Research suggests that some obstacles are especially prevalent in the U.S. The first is access to vaccination. Despite the abundant supply, there are still “vaccine deserts” where access is limited. Where vaccines are available, many people are unable to take time from off work. Hourly workers may have to forgo pay if they are symptomatic after vaccination. The U.S. deemphasized primary care settings in its COVID vaccine rollout, bypassing the place most people get other vaccines and the professionals who advise them on benefits and risks. Other nations were able to rely on stronger primary care relationships.

The second obstacle affecting the U.S., perhaps more than other nations, has been profound political polarization and politicization. Recent analyses have found that political partisanship in the U.S. is a stronger predictor of vaccination than factors like age, race, education, or insurance status. Vermont (75%) and Massachusetts (73%) have vaccinated higher proportions of their residents than Alabama (47%) and Idaho (46%), reflecting differing leadership views about vaccination as an obligation or an individual choice. Republican governors in Texas and Florida have preemptively banned vaccine mandates or challenged them in court; others are attempting to block vaccine outreach to children. Some political and media figures have actively sought to undermine trust in government, public health officials, and science, spreading disinformation through social media.

How Can the U.S. Increase Vaccination Rates?

Requirements (or mandates) have been effective in other nations. High-income countries, like France, Canada, and Italy, have created strong incentives to increase vaccine uptake. This summer, France saw 1.3 million people sign up for vaccine appointments in a single day after President Emmanuel Macron announced proof of vaccination would be necessary to enter many establishments, like restaurants and stores. In Germany, people who are not vaccinated will be barred from public spaces in areas where COVID-19 hospitalization rates are greater than three patients per 100,000 people. Italy, which has one of the world’s strictest mandates, required all public and private workers to be vaccinated or face suspension with no pay. Austria has announced a nationwide vaccination mandate for February 2022, the first of its kind in a Western democracy.

Given the level of political polarization, such requirements are difficult to imagine in the U.S., even though school and workplace vaccination requirements have existed here for more than a century. Nevertheless, the U.S. federal government has ordered mandates for federal workers, military personnel, health care workers, and employees of companies with more than 100 employees. Legal challenges to these mandates have been mounting and at least three judges have stayed the mandates while courts review them. Despite those challenges, such requirements are being enacted locally, in New York City and Los Angeles, and among some large employers, health care organizations, and other private businesses. Vaccine uptake has increased where requirements have been imposed, demonstrating (as other countries have shown) that a mandate may be the only path to achieving higher vaccination rates.

Poor access to care, decisions to bypass primary care, and politicization of the pandemic and vaccines have contributed to a comparatively lower vaccination rate in the United States. Other countries also struggle with vaccine hesitancy and political resistance. Even those with better access to care have relied on mandates and incentives to raise vaccination rates. Legal challenges to U.S. federal authority to mandate vaccination need not stop local jurisdictions or the private sector from imposing such requirements. These may be the only way to combat the ongoing toll of the pandemic, which is killing more than a thousand Americans each day and imposing severe economic costs on families, businesses, and the nation.

The Supreme Court Weighs In on Vaccine Mandates