Small Share of Medicare Supplement Plans Offer Access to Dental, Vision, and Other Benefits Not Covered by Traditional Medicare

Medigap plans, also referred to as Medicare Supplement plans, help make beneficiaries’ out-of-pocket costs more predictable by paying part of their cost sharing. Unlike Medicare Advantage plans, which have variable designs and are managed at the county level, Medigap plans are often noted for their standardization, a result of legislation implemented in 1992, with largely consistent benefit categories for each plan type. This resulted in 10 Medigap plan types (designated by different letters) with varying levels of cost sharing but a consistent benefit set that allowed beneficiaries to make apples-to-apples comparisons across plans. However, regulations allow Medigap plans to offer additional benefits not covered by traditional Medicare, allowing for some variation in benefits across plans, even in this largely standardized market. With Medigap enrollment growing at more than 4 percent a year over the past five years and continued policy discussions on expanding access to dental, vision, and hearing services, it is important to understand the supplementary benefits offered under these plans and whether this addition has an impact on beneficiaries’ ability to navigate and access care through Medicare.

We analyzed Medicare Supplement policy data collected by the National Association of Insurance Commissioners, identifying plans (i.e., specific products) and insurance carriers that offer — either with or without additional premiums — additional “innovative” benefits, broadly defined as vision, dental, hearing, or other services not offered through traditional Medicare. We found that:

The inclusion of these benefits complicates the otherwise standardized offering of Medigap and potentially complicates beneficiary decision-making. The added benefits also may increase premiums for Medigap plans, which may not always be clear or immediately apparent to beneficiaries. 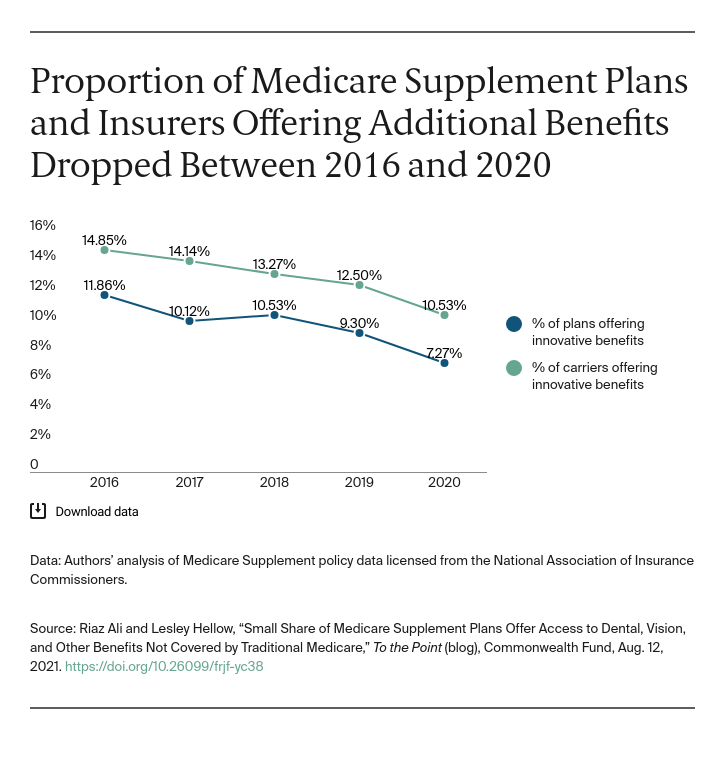 Beneficiaries are asked to make trade-offs about cost and access, with imperfect information about their future health needs. Moreover, given the differences between how Medicare Advantage and Medigap plans are designed, funded, and managed, with the former variable by county and the latter largely standardized, the decision is not a simple one for beneficiaries.

As the number of people enrolling in Medicare increases, policymakers must focus on the implications that Medigap benefit design has on quality, affordability, and access and whether efforts to provide additional benefits within Medigap plans is necessary to better meet beneficiaries’ needs.

About Our Analysis and Methodology

For this analysis we used data licensed from the National Association of Insurance Commissioners (NAIC). Specifically, we used the Medicare Supplement Exhibits for years 2016–2020. Per NAIC, “innovative” benefits are defined as those not available as part of the standardized Medicare supplement benefit design. Examples of new or innovative benefits may include, but are not limited to, the following services not already covered by Medicare and excluding prescription drug coverage:

For the purposes of this analysis, innovative benefits are part of the Medicare Supplement policy and would most likely be included in the premium, however the data do not distinguish between those policies that embed these benefits (with no additional cost) and those that offer them with an additional premium.

Not all companies are required to file for every schedule/exhibit. The states determine the schedule/exhibit for which each company needs to file. Some carriers in the health plan demo files are not included in the Medicare Supplement file. As with other analyses done using NAIC data, certain states (e.g., California) are likely underrepresented, as NAIC does not capture plans required to file or report into departments other than each state’s respective Department of Insurance.

For our calculations, we excluded all plans that:

To obtain the total number of carriers we identified the carrier roll up by the NAIC Company Code, “COCODE.”

To obtain the total number of plans, we normalized the data based on the plan types offered at the start of our analysis period. This includes all plans identified as A–N issued prior to a state’s revisions to its regulatory program and identified as a standard plan at the time of issue. Plan type designation “P” identified policies issued prior to the effective date of this state’s revisions to its Medicare supplement regulatory program pursuant to the Omnibus Budget Reconciliation Act (OBRA) of 1990, and which are no longer offered in a state. Policies not meeting either of these definitions should be designated with “O.” This includes states that qualified for and received a waiver under federal law from the A–N requirements (Massachusetts, Minnesota, and Wisconsin). A policy issued in these three states that did not require changes as the result of modifications to the state regulatory program should be reported as “O.” The high-deductible plans F and G and the traditional plans were aggregated together as they were not designated as high-deductible or traditional.