Roy Jasso, an older, Latinx adult living on the U.S. West Coast, believes that long-entrenched cultural taboos against seeking mental health care are gradually beginning to change in his community. “I think with mental illness, because it was such a hush-hush thing years ago . . . because people believe they’re normal or healthy, say, ‘Nah, it’s not something serious that I need to look into,’” he says. But “now they’re understanding, ‘Hey, it’s an issue that needs to be dealt with.’”

Black and Latinx adults make up less than 20 percent of Medicare enrollees, and their perspectives may be underrepresented in national datasets, making it difficult to understand their unique health care experiences. To elevate their voices and better understand Jasso’s health care experiences and those of other older Black and Latinx adults, PerryUndem, a public opinion research firm, held 12 focus groups with 88 participants between July and October 2021, supported by the Commonwealth Fund. All participants were Medicare enrollees age 65 and older. Focus group participants were placed in sessions based on their race, ethnicity, health status, and income level. Participants were asked about their experiences seeking and receiving mental health care. For this post, we conducted follow-up interviews with participants who agreed to be contacted to elaborate on their responses. 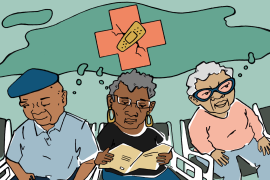 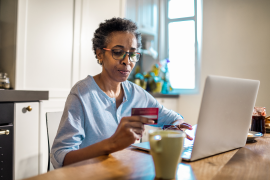 Black and Latinx adults often experience racism and a lack of respect in the health system, which can deter them from seeking mental health care. Racism itself has negative mental health impacts, including stress, anxiety, and depression, and racism in health care can lead to misdiagnoses as well as adverse physical health outcomes, including greater morbidity and mortality from chronic diseases. A recent Commonwealth Fund analysis found that older adults who reported feeling discriminated against when seeking health care are disproportionately people of color and are nearly twice as likely to report having a mental health diagnosis such as depression or anxiety than those who have not been discriminated against.

But these needs are not met. Previous research has shown that a shortage of culturally competent providers and lack of coverage (Black people are more likely to be uninsured than white people) are reasons why Black and Latinx people may have untreated mental health issues. And compared with older adults in other high-income countries, older adults with mental health needs in the U.S. report the highest rates of cost-related difficulties getting health care. They also report the highest rates of economic hardships such as not being able to afford things like nutritious meals, rent or mortgage payments, or bills for monthly utilities, all of which can affect mental health and the ability to afford care.

In addition to discrimination and cost-related challenges, cultural taboos and stigma around mental health can result in people not getting the care they need. As one older Black adult said, “The inadequate resources for mental health as well as Black people’s inadequacy to deal with mental health [are both part of the problem].”

Another older Latinx adult said, “I know when my mother passed away my father couldn’t handle it, but he was . . . too macho to go to a therapist. I say, ‘We could find you a Spanish-speaking therapist.’ He said, ‘Oh, I don’t need that.’ I say, ‘Well, what about church?’ He was just very stubborn.”

Previous research shows that Black and Latinx Americans are more likely than their white counterparts to rely on religious institutions to help with mental health issues. One study found that 90.4 percent of African Americans indicate that prayer is very important when coping with stress, compared with 66.7 percent of non-Hispanic whites. There are multiple, complex reasons for this reliance on religious rather than health care institutions.

Many Black and Latinx patients say they don’t trust the health care system both for historical reasons and because of their own experiences. Lack of trust along with stigma can mean many people forgo care. As one older Latinx adult said, “Hispanic people associate treatment or therapy with being crazy . . . that’s what they associate it with, so therefore they don’t go.” Older Black adults echoed these sentiments. One said, “Family members do not want to deal . . . because Black people still have a stigma of mental health care.”

To be sure, stigma is also an issue among white Americans, but its impact is more acute among communities of color because it is layered upon worse access to care, higher rates of uninsurance, and greater mistrust in the health system.

Many people, particularly those in the younger generations, recognize that change is necessary. Jasso’s nieces and nephews have received treatment for mental health, and he believes it is this care that “keeps them . . . peaceful, calm, relaxed, and not harm[ing] themselves or . . . others.”

There is an acute need for improved access to mental health care services in communities of color — a need that has been exacerbated by the COVID-19 pandemic, which has taken a greater toll on these communities. The White House in March announced a strategy to address the mental health crisis, including measures to strengthen provider capacity and expand access to services. Health policy leaders are also pursuing: