Ninety-one-year-old retiree Geneviève Dupaquier and student Dilara Ekinci, 25, leave a bench after chatting in the Jardin du Luxembourg in Paris on February 19, 2021. Their get-together was organized by “Paris en compagnie,” a program designed to combat the isolation and distress prevalent among older adults in France. Photo: Christophe Archambault/AFP via Getty Images

Nearly all U.S. adults over age 65 have some mental health coverage through their enrollment in Medicare, which covers annual depression and substance use screenings, outpatient therapy, and counseling services, among other services.1 But is that coverage enough to ensure older Americans’ mental health needs are being met, especially as cases of depression and other mental health disorders have risen during the pandemic?2

Drawing on findings from a survey of more than 18,000 adults age 65 and older in 11 high-income countries, we compare Medicare beneficiaries in the United States with older adults in other high-income countries with regard to mental health burden, ability to access and afford needed mental health care, and experience of financial hardship.3 (When our sample size allows for it, we also show how these results compare for different races and ethnicities within the U.S.) 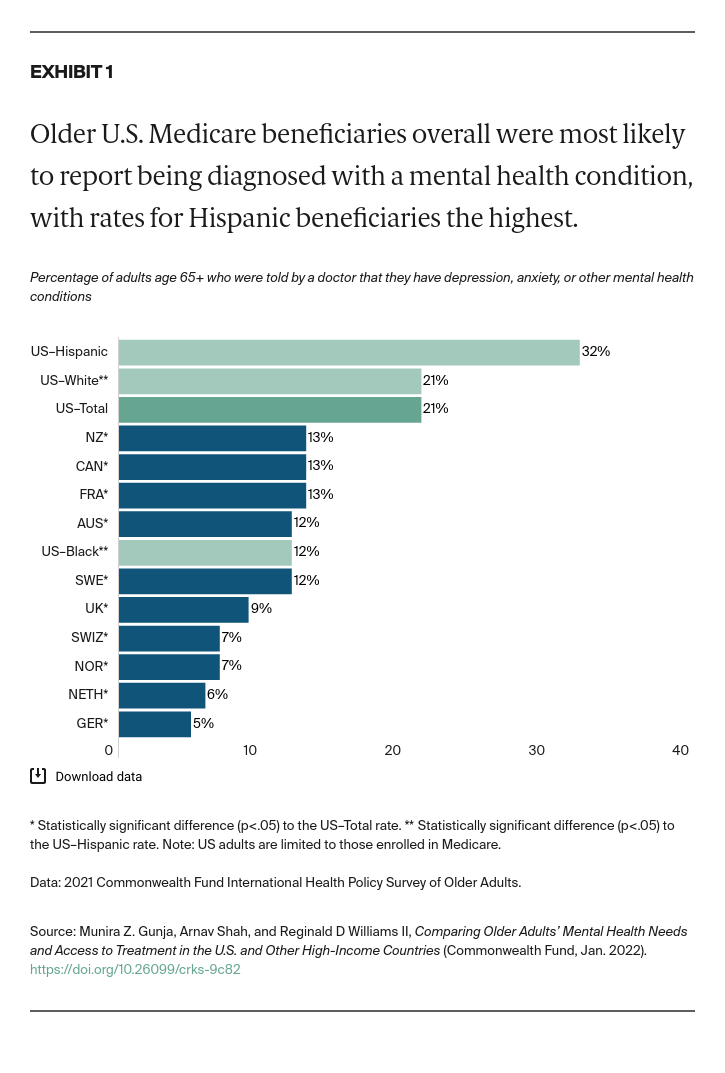 Older adults in the United States were the most likely to report a clinician’s diagnosis of depression, anxiety, or another mental health condition. One in five U.S. Medicare beneficiaries reported a mental health diagnosis, compared to 5 percent of older German adults.

But when looking across U.S. racial and ethnic groups, there were clear differences. A much greater share of Hispanic/Latinx Medicare beneficiaries said they were diagnosed with a mental health condition compared to white or Black beneficiaries. Black older adults were the least likely to report such a diagnosis, though studies have found that providers are more likely to underdiagnose Black adults for mood disorders than they are for other adults.4 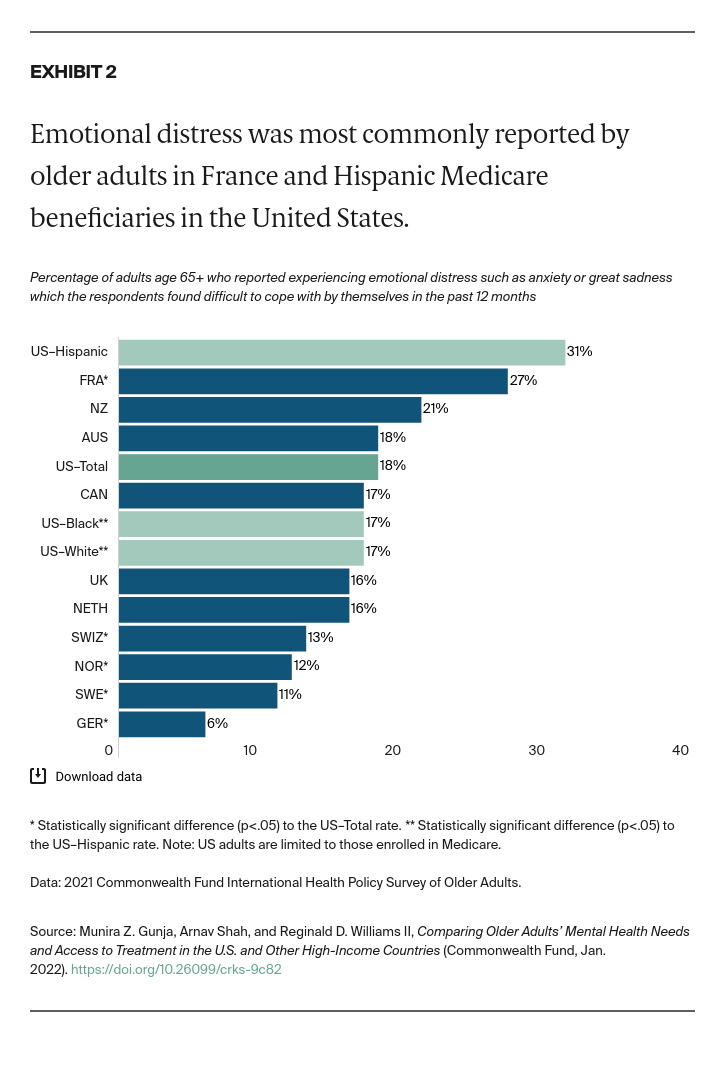 Self-reported emotional distress may provide a better understanding of the actual mental health burden faced by older people. That’s because not everyone who has a mental health issue seeks help from a health professional, whether because of cultural factors, financial barriers, or other reasons. As a result, many psychiatric conditions go undiagnosed and untreated, a problem that may be growing worse during the COVID-19 pandemic.

Although reports of anxiety and depression have increased in nearly all countries since the pandemic began,5 they have been particularly elevated in countries where infection rates have been high and strict lockdowns were ordered. Older adults in France, which locked down for eight weeks early into the pandemic, were the most likely to report emotional distress among the surveyed countries. 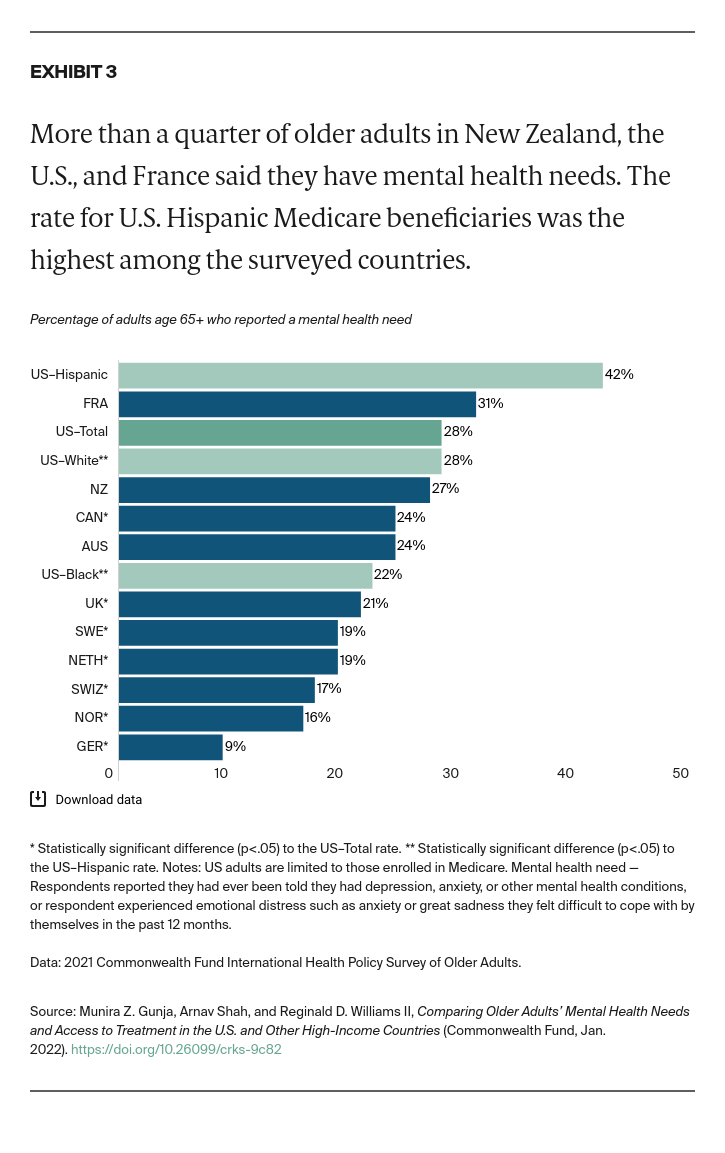 The Commonwealth Fund survey defines a mental health need as either a diagnosed condition such as anxiety or depression or self-reported emotional distress in the past 12 months.

When COVID-19 first took hold, rates of depression immediately spiked in the U.S., particularly among older Hispanic/Latinx adults.6 Indeed, our survey found that these beneficiaries reported mental health needs at a higher rate than their white and Black counterparts. 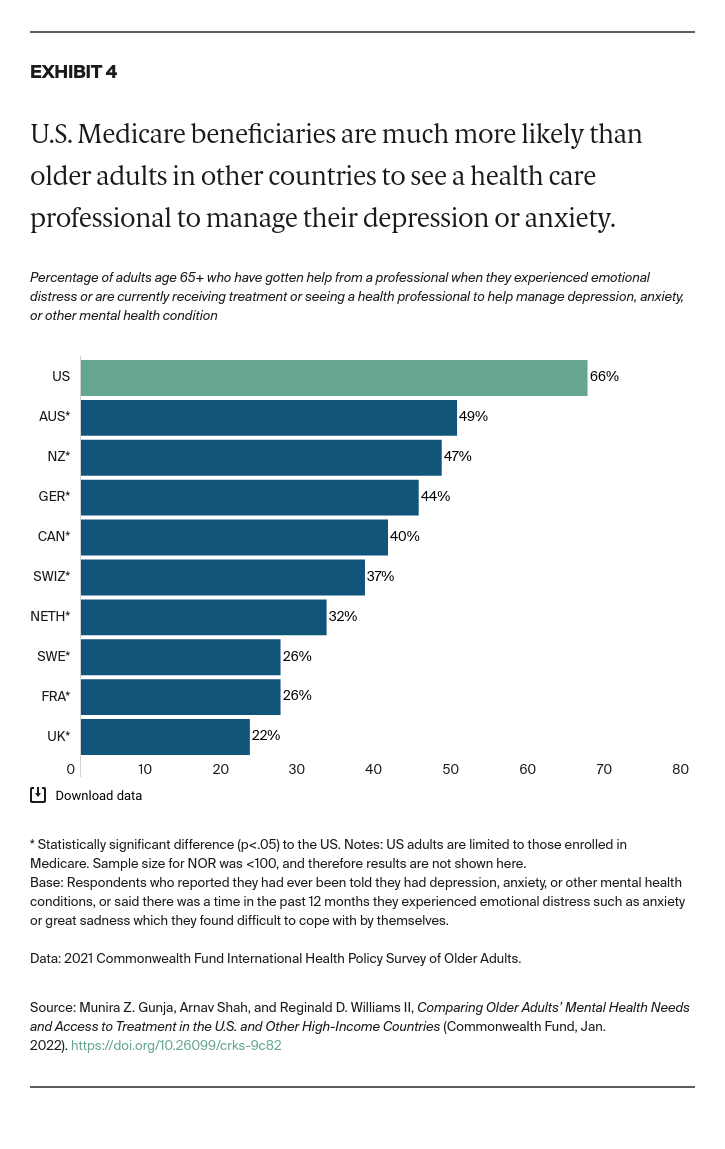 Cultural norms and stigma associated with psychological illness, as well as institutional barriers, may contribute to differences in the likelihood of people seeking mental health care during a time of need.7 Despite having one of the highest rates of mental health need in the Commonwealth Fund survey, French older adults were among the least likely to seek out help for their depression, anxiety, or emotional distress.

Two of three U.S. Medicare beneficiaries with a mental health need sought help from a professional, and they were significantly more likely than older adults in other countries to receive help. The low supply of mental health workers, and challenges accessing care in rural areas, also may be contributing factors as to why not all older adults with mental health needs seek care.8 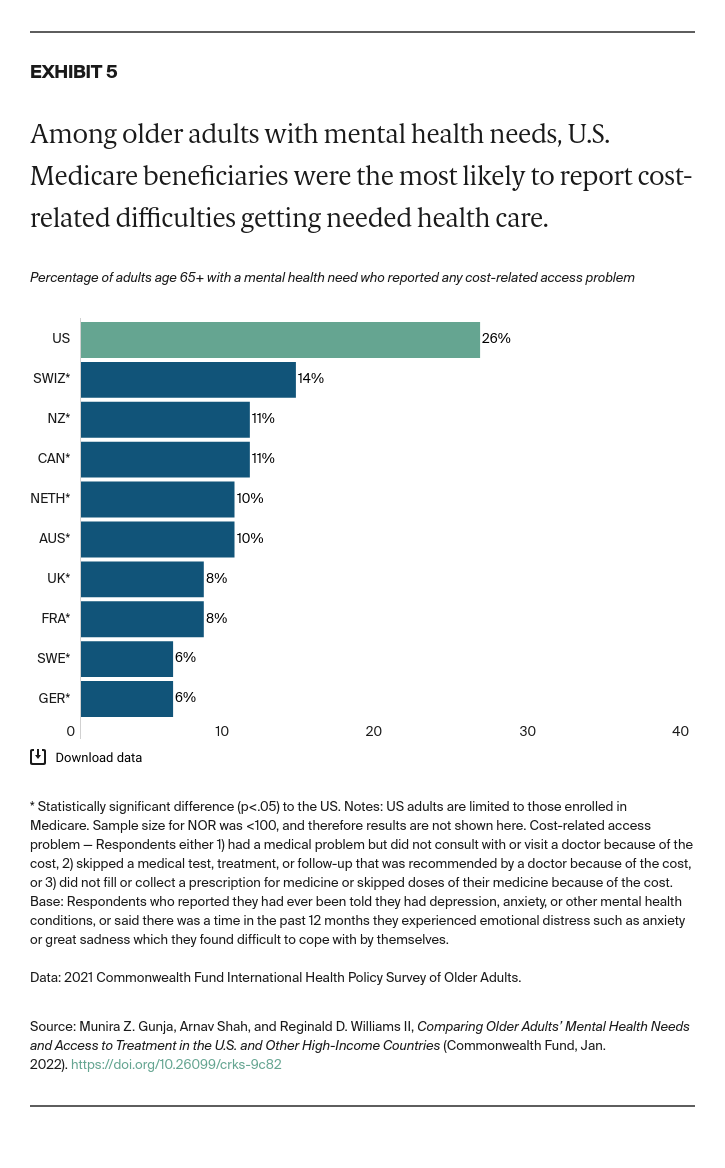 The Commonwealth Fund survey asked older adults about times when cost prevented them from accessing health care in the past year, including when they had a medical problem but did not visit a doctor; skipped a needed test, treatment, or follow-up; did not fill a prescription for medicine; or skipped medication doses.

Despite the financial protections Medicare offers, its coverage leaves many U.S. older adults exposed to high health care costs.9 This is particularly true for beneficiaries with serious mental health needs who are likely to spend more on health services.10 High out-of-pocket health costs can lead beneficiaries to postpone care or forgo it entirely, which can produce poorer health outcomes and raise overall health care spending.11

Fewer than one in 10 older adults with mental health needs in the United Kingdom, France, Sweden, and Germany reported skipping or delaying needed care because of costs. 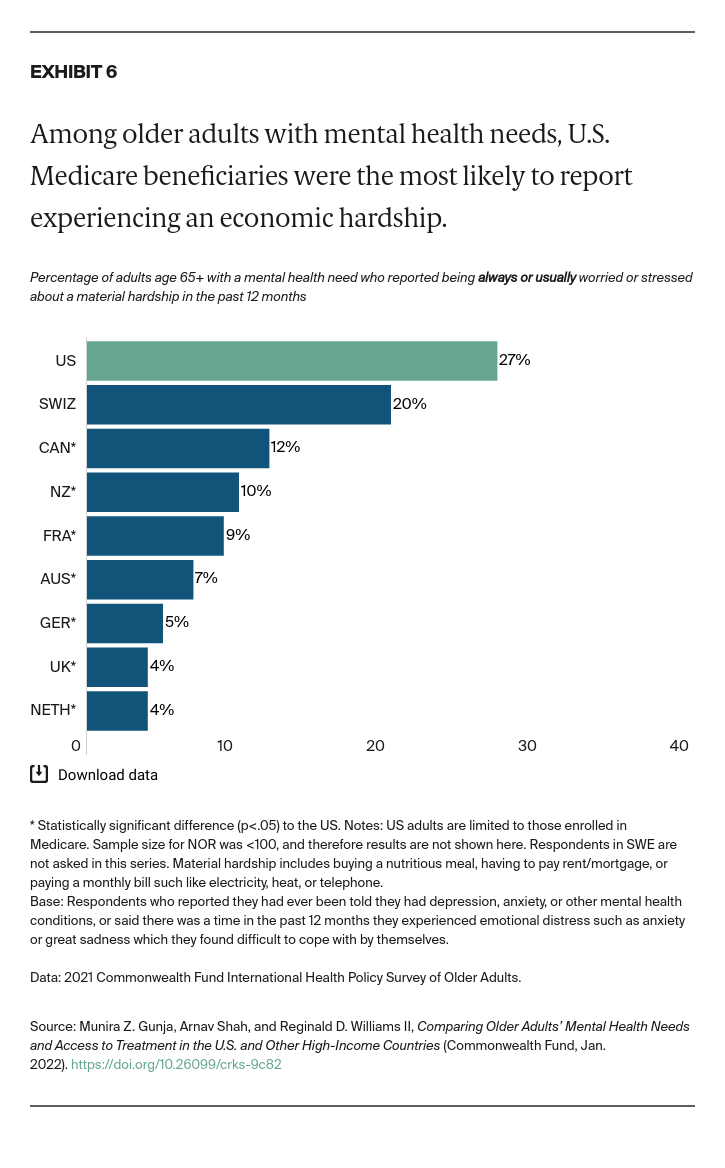 We asked respondents to the Commonwealth Fund survey whether they had experienced a material hardship, defined as always or usually being worried or stressed about buying a nutritious meal, making rent or mortgage payments, or paying monthly utility bills, such as for electricity, heat, or telephone service.

Medicare beneficiaries in the U.S. were the most likely among those surveyed to report being always or usually worried about at least one of these expenses — with the exception of older people in Switzerland.12 Older residents of the United Kingdom and the Netherlands were the least likely to have a material hardship. Studies show that unmet economic and social needs, which tend to be more prevalent in the U.S. than in other high-income countries, may contribute to the high rate of mental health needs. This is especially true for low-income adults in the COVID-19 era.13

Medicare has made it possible for older Americans to get care for many of their health needs.14 The program’s benefits centered on mental health are particularly critical, as our survey finds that older adults in the U.S., and especially Hispanic/Latinx older adults, have one of the highest rates of mental health needs among high-income countries and are the most likely to seek out care for their anxiety, depression, or emotional distress. These needs are even greater during the COVID-19 pandemic: one study found that over a quarter of older Americans believed the pandemic has had a substantial impact on their mental health.15

While policy changes in recent years have made it easier for older adults in the U.S. to get screened for mental illness and afford outpatient mental health care, many seniors still face major challenges accessing and affording services.16 For example:

Beyond the Medicare program, mental health problems are often tied to social barriers and social determinants. One study found that self-reported history of depression was associated with more unmet needs and greater financial hardships for Medicare beneficiaries.21 Collaboration across policy areas will likely be necessary to address the social needs of older U.S. adults with mental health problems.

What Other Countries Are Doing

Examples of policies that other countries have implemented to remove financial barriers to mental health care include:

Most of the countries we studied, including the U.S., have also launched anti-stigma campaigns to change public attitudes toward mental illness. Several, including New Zealand’s Like Minds, Like Mine campaign, have achieved notable success, although it remains to be seen whether change can be sustained over the long term.26

What Accounts for U.S. Disparities?

Finally, mental health disparities among U.S. racial and ethnic groups warrant further investigation and policy attention. Older Hispanic/Latinx adults are nearly three times more likely than older Black adults to be diagnosed with a mental health condition. The COVID-19 pandemic, with its attendant social isolation and loss of employment, plus fears surrounding changes in immigration and “public charge” policies, appear to have had a disproportionate impact on the mental health of older Hispanic/Latinx adults, regardless of age.27 Studies have found that Hispanic/Latinx adults who were either born in the U.S. or have lived in the U.S. for more than 10 years are more likely to suffer from mental illness compared to those who are foreign-born or have recently emigrated.28

Meanwhile, the lower rates of mental illness found for older Black adults may not necessarily be a success story. Stigma, lack of trust in the medical system, and systemic barriers are all possible factors as to why Black adults report lower rates of both mental health illness and seeking treatment.29 Understanding the cultural differences that may be associated with the mental health burden should be an aim of future research.

A total of 18,477 interviews of adults age 65 and older were completed for the 2021 survey. The full U.S. sample included 360 adults ages 60 to 64 or who reported being older than age 60 but did not give an exact age. These responses were not included in this analysis. Final country samples (age 65 and older) ranged from 500 to 4,332. The U.S. sample was limited to Medicare beneficiaries. See here for an appendix describing demographic characteristics of each country sample. Interviews were completed either online or using computer-assisted telephone interviews.

A common questionnaire was developed, translated, adapted, and adjusted for country-specific wording as needed. Not all questions were asked in each country (noted in the exhibits). Interviewers were trained to conduct interviews using a standardized protocol. Response rates varied from 7.2 percent in the United Kingdom to 47.7 percent in Switzerland.